Israel’s Samson Complex: Will Anyone ‘Pick Up the Phone?’ 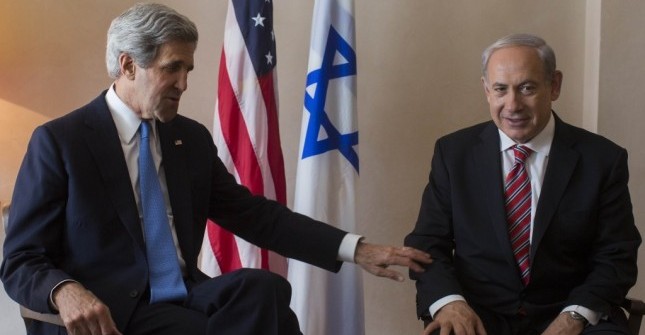 Washington’s reputation as an “honest broker” in the Israeli-Palestinian conflict is in tatters after four years of indulging Israeli prime minister Benjamin Netanyahu’s intransigence. The Obama administration desperately needs to resurrect a credible peace process.

Faced with a diplomatic impasse between Israel and the Palestinian Authority of Mahmoud Abbas, John Kerry, the US secretary of state, seized his chance earlier this month. He extracted from the Arab League an agreement to dust off a decade-old regional plan, the Arab Peace Initiative, declaring the move “a very big step forward”.

Unveiled by Saudi Arabia in 2002, the plan promises Israel normal relations with the whole of the Arab world in return for its acceptance of a Palestinian state based on the pre-1967 borders, or 22 per cent of historic Palestine.

The new Arab overture, like its antecedent, has raised barely a flicker of interest from Israel. Tzipi Livni, Washington’s sole ally in Mr Netanyahu’s cabinet, predictably lost no time in praising the plan. But the prime minister himself has studiously avoided mentioning it, leaving his aides to dismiss the initiative as a “trick” designed to ensnare Israel in injurious peace talks.

His oblique response serves as a rejoinder to one of the conflict’s most enduring myths. Even before Israel occupied the West Bank, East Jerusalem and Gaza in 1967, it presented itself as eager for acceptance from the Arab states. This fiction, which continues to shape western perceptions, rests on two pillars.

The first assumes Israeli fervour to engage diplomatically with the Arab world. Or, as Israel’s then-defence minister Moshe Dayan famously told the BBC just days after the end of the Six Day War: “We are awaiting the Arabs’ phone call.”

The second, articulated most clearly by the late foreign minister Abba Eban, castigates the Arabs for “never missing an opportunity to miss an opportunity” to make peace with Israel.

And yet the historical record suggests the exact opposite. After their humiliation in 1967, the Arab states quickly conceded – at least, privately – that Israel was here to stay and began considering ways to accommodate it.

As Shlomo Ben-Ami, an Israeli historian who was foreign minister during the 2000 Camp David peace talks, observed: when the Arab states called, “Israel’s line was busy, or there was no one on the Israeli side to pick up the phone.”

Such obduracy was confirmed in last month’s disclosure by WikiLeaks of classified US diplomatic cables from that period. In late 1973, a few weeks after the end of the Yom Kippur War, the Arab League quietly offered Israel a regional peace agreement that would recognise its pre-1967 borders. But the Arab states were rebuffed.

According to a cable from January 1975, US diplomats in the Middle East concluded that Israel’s leaders demonstrated “an extraordinary lack of understanding” of Arab intentions, preferring instead to gird “their loins for the fifth, sixth, seventh Israeli-Arab wars”. The cables describe Israel as hellbent on self-destruction, suffering, in the words of US officials, from a “Masada or Samson complex”.

This context should be borne in mind as Israel’s current opposition to peace talks is ascribed solely to the hawkishness of Mr Netanyahu’s government. In truth, this is a pattern of behaviour exhibited by Israel over many decades – or what former Palestinian prime minister Salam Fayyad termed last week Israel’s “occupation gene”.

The Saudi peace initiative of 2002 arrived at a time early in the second intifada when Israelis were terrified by a wave of suicide bombings and the Israeli economy appeared close to collapse. Nonetheless, the then military chief of staff – today’s defence minister – Moshe Yaalon advised that Israel’s highest priority was not negotiations but a military campaign to “sear defeat deep into the Palestinian consciousness”.

At least, the newly revived Arab peace initiative has the advantage that it appears – unlike its predecessor – to have the enthusiastic backing of the White House.

Another difference, doubtless due to pressure from Mr Kerry, is a concession from the Arab states that an agreement on Palestinian statehood will not require Israel to return to the 1967 lines. Approval of “minor” and “comparable” territorial exchanges brings the Arab League into line with the diplomatic positions of Mr Abbas, US President Barack Obama and, ostensibly at least, several previous Israeli prime ministers.

But Mr Netanyahu seems to be opposed even to testing the sincerity of the Arab initiative. His main objection – beyond a general antipathy to any proposal for Palestinian statehood – is reportedly that “minor” land swaps will not be generous enough to ensure Israel keeps all of its settlements.

Such rejectionism is mirrored by Hamas, which has protested that the League is treating the contours of the Palestinian state as “property for sale”.

Mr Netanyahu’s inflexibility is being advanced even as he insists that there must be no preconditions on talks and warns that, without a peace agreement, Israel faces a bleak future. Mr Kerry, meanwhile, has proffered his own warning: there is a two-year deadline to finding a solution to the conflict.

Whatever his protestations, none of this will overly worry Mr Netanyahu. After all, this is a government that last week found grounds for complaint in Google’s decision to confer the status of “Palestine” on a search engine designation.

The reality is that another round of failed peacemaking will do more damage to the Palestinians and Washington’s reputation than to an Israel that never intended to pick up the phone in the first place.