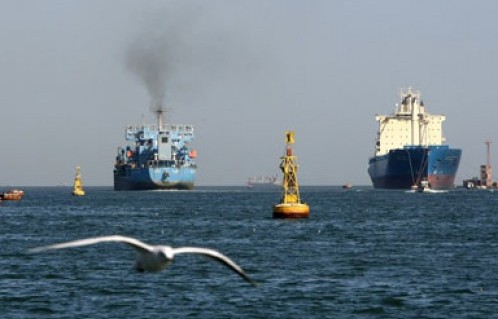 The earth reportedly shook as two Iranian naval boats approached the Suez Canal on Tuesday morning. For the U.S., though, the building tension over the passage could result in diplomatic, not literal, earthquakes.

When the news was first announced last week that the two warships would pass through the canal, Israeli reaction appeared split. Now it seems Israeli Prime Minister Benjamin Netanyahu has joined his foreign minister in ratcheting up the rhetoric, saying, “Israel takes a grave view of this Iranian step.”

Following closely on the U.S. veto of a UN Security Council resolution denouncing Israeli settlements, Israel’s blustering approach to the Iranian warships may provide yet another instance where the “special relationship” causes the U.S. to choose between its ally Israel, on one hand, and international law and maintaining regional influence on the other.

Egyptian approval of passage for the Iranian ships was first reported when Israeli Foreign Minister Avigdor Lieberman said the move amounted to a “provocation” by Iran. “The international community must understand that Israel cannot forever ignore these provocations,” he warned ominously.

Covering the comments, the Wall Street Journal pointed to fissures over Lieberman’s blustering and the quieter approach preferred Ehud Barak and the Israeli Defense Ministry.

At the time, Lieberman’s comments seemed to be made for U.S. consumption. Ethan Bronner’s New York Times piece had this nugget (my emphasis):

The first word came from Foreign Minister Avigdor Lieberman in an address to a group of American Jewish leaders in Jerusalem. The speech, which hinted at a possible response, was closed to reporters…

A former State Department senior intelligence official called on Israel “to stand down and avoid any provocative actions.” Middle East Institute scholar Wayne White told LobeLog that Israeli “muscle-flexing” and a perception of “high-handedness” now could be harmful to U.S. (and even Israeli) interests on a wide range of issues. He mentioned the still-developing and fluid situation in Egypt, anti-regime protests in Iran itself, and uncertainty in Jordan, which is facing some unrest and, like Egypt, has a peace deal with Israel.

White’s list of examples gives a taste of just how many crises the U.S. is facing in the region. With protests in several U.S.-allied countries like Egypt, Bahrain, Jordan, Tunisia, and even Iraq, the U.S. wants to keep things relatively calm. As White points out, another crisis, with Israel and the U.S. pitted against Iran and Syria (whose waters the Iranian ships are reportedly bound for), could easily inject anti-U.S. and anti-Israeli sentiments into the anti-government movements that have been sweeping the region or permit besieged autocrats to divert popular attention and agitation.

The other elephant in the room is the notion of Suez passage itself. So far, the U.S. has taken a measured tone. State Department spokesperson P.J. Crowley said on Friday: “If the ships move through the canal, we’ll evaluate what they actually do.” He said the potential issues were the ships’ cargo and destination. Crowley seemed eager to move onto a new topic, repeatedly interrupting the questioner(s).

The lack of U.S. focus on passage itself is perhaps a nod to both the Constantinople Convention (1988) governing Suez Passage and the UN Convention on the Law of the Sea (1983, in force 1994), which allows “innocent passage”through even territorial waters. The Constantinople convention states:

The Suez Maritime Canal shall always be free and of commerce or of war, without distinction of flag.

Consequently, the High Contracting Parties agree not in any way to interfere with the free use of the Canal, in time of war as in time of peace.

One of those contracting parties is, of course, Egypt, which may not interfere or block anyone’s passage. The U.S. relies on this status quo as much, if not more, than any other country. Indeed, if the right of “innocent passage” is questioned in this case, think of all the possible ramifications for the U.S. Navy and its 11 aircraft carrier groups that span the globe, if not always to the acclaim of the natives. It’s not for nothing that the Navy has been the country’s biggest advocate for Senate ratification of the Law of the Sea Convention.

If the Israelis keep pushing back against Iran, rumblings of the diplomatic sort could soon follow for the U.S. Once again, as when Israel backed ousted Egyptian president Hosni Mubarak until his last days and relentlessly pressed the Obama administration to cast his UN Security Council veto on a resolution that was entirely consistent with U.S. policy since 1967, Washington’s “special relationship” with the Jewish State could become burdensome to broader U.S. strategic interests.