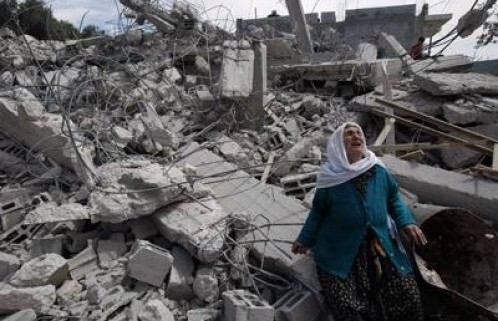 On the record quote (not statement) by Chris Gunness, UNRWA Spokesman

“The number of Palestinian buildings in the West Bank demolished by the Israeli authorities has hit a record high for the third consecutive month. Latest UNRWA figures show that in March 76 homes or structures were demolished compared with 29 in January and 70 in February. The number of people forcibly displaced by these demolitions has also hit a record monthly high with 158 people forcibly displaced in March by demolitions, including 64 children. In January 70 people were displaced by demolitions, including 47 children. In February 105 people were displaced, including 43 children.”

“So far this year the Israeli authorities have demolished 175 Palestinian buildings and displaced 333 people of which 175 were children. This is having a devastating impact, particularly on women and children, whose lives are being destroyed along with their homes. I am not saying this is classic ethnic cleansing, but the UN High Commissioner for Human Rights, has condemned this discrimination and make no mistake, it is discrimination against one ethnic group.”

“We now have a situation where the demolition of Palestinian homes has hit a record high and the number of Jewish homes built in contravention of international law on Palestinian land is rising to record highs. These contrasting figures should alarm the policy makers whose peace making efforts are being demolished with virtual impunity. The West Bank is where the future Palestinian state is meant to be situated. Its viability is being further eroded with each demolition. UNRWA calls on the peace makers to bring the necessary influences to bear on Israel to end these discriminatory practices. As the High Commissioner for Human Rights said recently, “This culture of impunity leads to more abuses, stimulates anger and resentment on all sides, and impedes the peace process.”

“Yesterday was Land Day. I name today Demolition Day. Homes, families, lives and the peace process are being demolished.”