Is the ‘Turkish Model’ the one to follow in region? 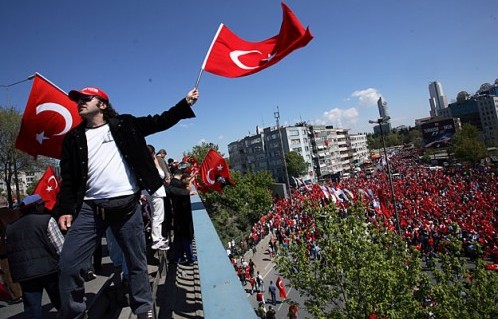 Many commentators today are basing the success of Turkey’s Justice and Development Party (AKP) in the June 12 elections largely on its ability to guide the country through a decade of remarkable growth.

Economic indicators are often seen as the obvious logic behind economic stability – lack thereof. However, they are not enough on their own to reach such sweeping conclusions. In an article entitled, ‘Look toward Turkey’s economy to understand Erdogan’s re-election’, Ibrahim Ozturk opined: “From 2002 to 2007, Turkey experienced its longest period of uninterrupted economic growth, which averaged 6-7 percent year on year, while annual inflation plummeted. Moreover, the economy proved resilient following the global financial crisis, with growth recovering rapidly.” (Lebanese Daily Star, June 18).

According to Ozturk’s perceptive analysis, the AKP’s success in picking up the pieces of a shattered economy (as a result of the 2001 severe economic ‘crisis’), and the ever-popular Prime Minister Recep Tayyip Erdogan “appear to have secured democratic political control of Turkey’s military and bureaucracy.” The powerful Turkish military had repeatedly interfered in the country’s politics, leading three military coups which all but destroyed Turkish democracy.

The very promising Turkish political experience, now branded the “Turkish model”, had its many challenges. It took a new generation of Turkish leaders to position their country as a politically stable regional power with a rising economy (the GDP registered an increase of 9 percent in 2010).

Did sound, self-assured policies engender a strong economy, or was economic growth responsible for the political stability (by keeping the military at bay, thus further solidifying Turkey’s democratic experience)? Libya is an interesting example to consider while reflecting on this question. The North African country, which is currently undergoing an armed revolt and Western-led war, had been scoring high in terms of sheer numbers. Thanks to petroleum-generated revenues, and a small population, Libya has the highest per capita GDP in Africa.

Its economic growth has been relatively stunning from 2000 onwards. In 2010, GDP grew by over 10 percent. For many Libyans however, social justice, distribution of wealth, political freedom and other issues proved of greater relevance than gratifying GDP charts.

In Egypt too, despite the greater poverty experienced by the much larger population (compared to Libya), the youth of the January 25 revolution came from varied economic backgrounds. For many of them, freedom seemed to top mere economic sustenance.

Turkey’s case is not dissimilar to these. In fact, a discussion of Turkey’s success cannot be reduced to one decade of economic growth and political stability. More, ‘modern Turkey’ cannot be reduced to the palpable successes of the AKP. It goes back to earlier generations, starting with Mustafa Kemal Ataturk, the founder of the Republic of Turkey. A larger-than-life figure in the eyes of several generations of Turks, Ataturk was able to win Turkey’s independence – no easy feat, considering the challenges of the time. However, neither he nor his style of politics resolved the question of Turkey’s cultural and political identity as a majority Muslim country that defined modernity based almost exclusively on Western values. This question actually lingered in the country for decades.

One could argue that situating Turkey in suitable socioeconomic, cultural and political contexts was one of the greatest challenges facing modern Turkish politicians. For decades, Turkey was torn between its historical ties to Muslim and Arab countries on the one hand, and the impulsive drive towards Westernization on the other. The latter seemed much more influential in forming the new Turkish identity in its individual, collective, and thus foreign policy manifestation and outlook.

Even during the push and pull, Turkey grew in import as a political and economic player. It also grew into a nation with a decisive sense of sovereignty, a growing sense of pride and a daring capacity for asserting itself as a regional power.

In the 1970s, when ‘political Islam’ was on the rise throughout the region, Turkey was experiencing its own rethink. Various politicians and groups began grappling with the idea of taking political Islam to a whole new level. In fact, it was the late Dr Necmettin Erbakan, Prime Minister of Turkey between 1996 and 1997, who began challenging the conventional notion of Turkey as a second-class NATO member desperate to identify with everything Western.

In the late 1980s Erbakan’s Rafah Party (the Welfare Party) took Turkey by storm. The party was hardly apologetic about its Islamic roots and attitude. Its rise to power as a result of the 1995 general elections raised alarm, as the securely ‘pro-Western’ Turkey was deviating from the very the rigid script that wrote off the country’s regional role as that of a “lackey of NATO”, (a phrase used by Salama A Salama in an Al-Ahram Weekly article last year).

The days of Erbakan might be long gone, but the man’s legacy never departed Turkish national consciousness. He began the process of repositioning Turkey – politically, as well as economically – with the creation of the Developing Eight (D-8), which united the most politically significant Arab and Muslim countries. When Erbakan was forced to step down in a ‘postmodernist’ military coup, it was understood as the end of short-lived political experiment.

But the 2002 election win of the (AKP) rekindled Erbakan’s efforts through a young and savvy new political leadership. This has just been awarded yet a third mandate to continue its program of economic growth, political and constitutional reforms.

Now Turkey seems to be offering more than stability at home. It is also serving as a regional model to its neighbors, an important contribution in the age of Arab revolutions and potential political transformations.

It is essential that the Turkish experience is not reduced to only charts and numbers delineating economic growth. Some very wealthy countries are politically restless. The success of the Turkish model supersedes the economy to sensible political governance, democracy, the revitalization of civil society and its many institutions.

Good economic indicators can be promising, but without responsible leadership to guide growth and distribute wealth, political stability is never guaranteed.