Is it Time to give Saudi Arabian Youth its Voice? 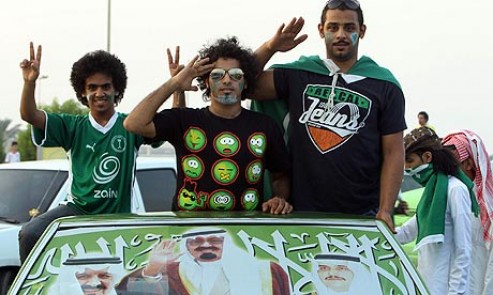 The term gerontocracy usually means rule by the elderly. Its use has not been as popular with the media as it was in the days when the rulers of two of the most powerful countries in the world – China and the then Soviet Union – were comfortably in their eighties. Deng Xiaoping and Leonid Brezhnev were very different animals. Deng was an old man in a hurry – working with a vengeance to transform China into the totalitarian capitalist state it is today. Brezhnev presided over the slow decline of Soviet Russia, and bequeathed to his successors a rotten system that ultimately imploded, bringing down the Iron Curtain in the process.

China and Russia have new breed of leaders today. Technocrats in late middle age like Wen Jiabao, and vigorous nationalists in their 40s like Vladimir Putin and Dmitri Medvedev.

Here in the Middle East, gerontocracy survives. The word does not imply rule by infirm geriatrics. President Hosni Mubarak is 82, and remains well in control of his country. King Abdullah of Saudi Arabia is 86. Despite his recent back operation, he also seems to be in full command. His immediate heirs apparent are not much younger. Both countries appear to the outside world as forces for stability in the region. Older leaders have witnessed many turbulent times in their long lives, and (Deng notwithstanding) tend to be disinclined to take too many political risks that disturb the status quo.

Of the two rulers, King Abdullah more closely resembles Deng in his pursuit of reform. Unlike Deng, however, the King’s chosen path is iterative rather than transformational. Unlike Egypt, Saudi Arabia could not be described as an electoral democracy, although it has taken tentative steps in this direction with the introduction of municipal elections. But the ruling class in the Kingdom would claim that its political system is at least as democratic as that of neighboring countries where citizens can elect presidents and parliaments every few years.

It’s one thing casting a vote every four years, they would say, and quite another being able to make your voice heard in the intervening years. Saudi Arabia would point to its intricate system of consultation: an appointed advisory council, the Majlis Al-Shoura; the right of every citizen to petition the King and his regional governors; access to the King and his Council of Ministers granted to business and tribal leaders. Formal and informal structures that enable the Kingdom to respond to the needs of its people without resorting to elections.

What right, the leaders might say, do the mature democracies of the West have to criticize the Saudi political system when the country has for the past 70 years been an island of stability surrounded by an ocean of discord in so many of the flawed democracies on its borders?

And they would have a point. But that stability, underpinned by Saudi Arabia’s key position in the world order as the leading oil producer, is under threat from within.

The aged leadership of the Kingdom is not an isolated oligarchy that clings to power through military might and overt internal repression. It is at the pinnacle of a society that has a deep respect for its elders. If you are introduced to a gathering of Saudis, etiquette demands that you first shake the hand of the oldest person. Saudi gerontocracy is institutional. It’s derived from centuries of cultural and religious tradition.

But the Kingdom’s prosperity and success have in themselves created conditions that are challenging the established order. At the heart of the problem is demography. Today, best estimates suggest that 70% of the population is under 30. Unemployment among Saudi youth is high. Efforts to step up the Saudization program have had limited success. Meanwhile, the young population is benefitting from the billions of dollars the government is investing in education. A young, educated and partly idle population is a dangerous mix.

Efforts by traditionalists to keep the lid on untraditional thinking often conflict with the barrage of western influences arriving through the media and the experiences of young Saudis who have been educated in Western universities. Youngsters with too much time on their hands are prey to the seductive messages of radical Islam – what the leadership describes as “deviant thinking”.

And commendable efforts by the government to encourage greater openness in the media have led to the rapid take-up of the social media – an alternative reality in which the young can express themselves among their peers in a way unknown to previous generations.

An interesting example of how the highly prescriptive, top-down system of government reacts to challenges to the status quo can be found in a recent Arab News article about efforts in Jeddah to organize inter-school sporting completion for girls. Conservative elements in Saudi society frown on the participation of women in sport. Despite rising obesity and associated medical problems among the female population, many people regard competitive sports like swimming, athletics and volleyball as “unladylike”. The governors of the schools involved quickly came under pressure both from the Ministry of Education and individuals to stop the contests. The full article is here.

The growth of the social media in Saudi Arabia, through which young people freely discuss such issues, is graphically shown in a post by Wael, a young Saudi blogger.

So if there truly is a growing disconnect between an increasingly irreverent youth and the remainder of the population brought up to respect the wisdom of elders, how can the Kingdom’s establishment bridge the gap? By accelerating the process of reform along Western lines with increasing electoral representation? Possibly, though not without the risk of losing control of the process.

There are a number of institutions set up to interact with youth. There’s the General Presidency of Youth Welfare, a government department. Also WAMY, the World Association of Muslim Youth. The Chambers of Commerce give a voice to young businessmen. And there are social programs that have the backing both of the private sector and the state, such as Bab Rizq Jameel, which is dedicated to helping young people into the workforce. But I get the impression that most institutions operate on the basis that “father knows best”. I may be wrong, but none seem to operate on a peer-to-peer basis in the same free-form manner as the social networks.

If we accept that the government is unlikely to risk radical change, it seems to me that it still has options to engage its youth without talking down to them.

How about creating a junior Majlis Al-Shoura appointed from representatives of the population between the ages of 18 and 30? Giving such a body the same access to the leadership as the senior Majlis enjoys would enable the King and his ministers legitimately to claim that they listen directly to the unmediated concerns of young people?

And what about a virtual Majlis, in which young people of both sexes are able to interact in a formal manner without treading on the toes of the conservative factions which frown on the physical proximity of young men and women? Such bodies could emulate the present reality of the social networks. They could serve to channel the creativity that abounds among Saudi users of Facebook and internet forums to the benefit of the country.

How about virtual think tanks, in which groups of young people are encouraged through the internet to focus on specific issues, with the active participation of ministers and other senior officials? The present involvement of the government in the social media seems to be limited to the occasional tweet by the Minister of Information.

If the leadership wants to defuse the potential demographic timebomb, perhaps it needs to start by engaging with the young people of the country on their turf and using their language. By scaling back on instruction and stepping up on dialogue, perhaps it can get a better handle on some of the vexing problems facing it today – extremism, drug abuse, unrealistic career expectations, an entitlement culture.

I’ve long held the opinion that Saudi Arabia has the answers to many of its problems in its own hands. A few million riyals spent on new ways of communicating with its youth might pay off far more in the long run than yet another study from an expensive foreign consultancy.

But what do I know? I’m just another foreign consultant