Iraq 10 Years On: The Benefit of Hindsight

The attempts by President George W. Bush to justify the American-led invasion of Iraq followed so many wildly different reasons with no coherent link that the liveliest of conspiracy theories have flourished. This has been fuelled by the obvious political failure that has caused no pain to Bush and his neo-conservative allies who launched the war, while the companies with links to those same neo-conservatives have taken a significant share in the billions spent in reconstructing Iraq. 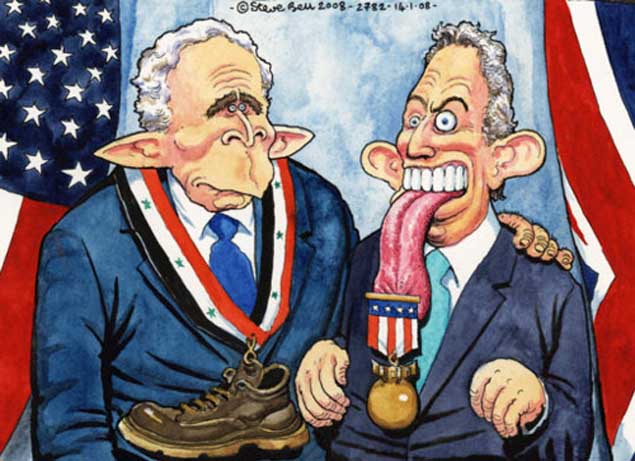 In the aftermath of the terrible attack on the World Trade Centre on 9/11, the first reason given was that Saddam Hussain supported Al Qaida, although Saddam had been ruthless in suppressing Islamists. Then Bush and Blair used Saddam’s alleged plan to manufacture and prepare to use weapons of mass destruction.

When eventually this reason ran thin, since there was only very dubious evidence found to support it, Bush and Blair shifted their ground yet again, and first quoted Saddam’s terrible human rights record as worthy of triggering the invasion, and then moved on to the bizarre neo-conservative doctrine of seeking pre-emptive regime change in order to encourage a domino effect of democracy spreading all over the Middle East.

Bush came to power with the promise of a minimalist foreign policy, but was completely derailed by the terrorist attack of 9/11 which gave the neo-conservative network in his administration the perfect excuse to rewrite the book to suit their agenda.

Only a few weeks after the destruction of the Trade Centre, senior members of the administration were arguing that the target had to be Iraq. Secretary of Defence Donald Rumsfeld made this case only a few days after 9/11.

By January 2002, President Bush started to prepare for an invasion of Iraq, by referring to Iraq as a part of the Axis of Evil and saying that “the United States of America will not permit the world’s most dangerous regimes to threaten us with the world’s most destructive weapons”.

The longest-running justification for the invasion of Iraq was that Saddam had weapons of mass destruction that were a threat to the security of America and its allies. In 2002, the UN’s Security Council passed Resolution 1441 which called for Iraq to completely cooperate with UN weapon inspectors to verify that Iraq did not have weapons of mass destruction, which included nuclear weapons.

And both Bush and Blair used this resolution to the full, insisting that complete compliance by Saddam was vital, and that the only way they could stop going to war was if the UN’s Chief Weapons Inspector could assure them that Saddam had “fully and unconditionally disarmed, as required by Resolution 1441”. This never happened although Hans Blix insisted that he would get the clearance in a few months.

But Bush had his excuse and he said in October 2002 that “the stated policy of the United States is regime change… However, if [Saddam] were to meet all the conditions of the United Nations [Resolution 1441], the conditions that I have described very clearly in terms that everybody can understand, that in itself will signal the regime has changed.”

And Blair followed Bush unquestioningly. In September 2002 Blair said to the British Parliament that “regime change in Iraq would be a wonderful thing. But that is not the purpose of our action. Our purpose is to disarm Iraq of weapons of mass destruction.”

A low point was the hitherto respectable Secretary of State Colin Powell making the administration’s definitive presentation to the UN Security Council in February 2003 but unable to show any hard evidence of nuclear weapons, and using evidence that later was proved to be unreliable.

The fact was that there were no WMDs. After the invasion, the US led Iraq Survey Group reported that Iraq had ended its nuclear, chemical and biological programmes in 1991. It said that it was clear that Iraq had no active programmes at the time of the invasion, even if Survey Group did find some old equipment and degraded remnants of chemical weapons from before 1991.

US fooled its allies

But having had a quick military victory, the Bush administration compounded its intellectual bankruptcy by failing to have any plan for reconstruction, and its foolish policies triggered years of bitter civil war from which Iraq has never recovered.

This vacuum of policy was deliberately not made clear, even to the Americans’ closest allies. Some years later in 2007, Alistair Campbell, one of Tony Blair’s closest advisors all through the war, made the shocking statement in an interview with Gulf News that Blair’s government had no idea who was going to run Iraq once they had helped invade the country and topple the government.

“The lack of any plan for post invasion reconstruction is a fair criticism, which can be directed most directly at the Americans. In the build up there was a sense that we were dealing with the State Department plan for the aftermath. It became perfectly clear that once the aftermath began, that Rumsfeld and the Defence Department were very much in charge of it,” said Campbell.

“There were parts of the US and UK administration that believed that the troops were going to be greeted as conquering heroes, and everything was going to flow from that. The lesson to be drawn from the aftermath planning is that you should prepare for worst case scenarios rather than best case scenarios.”

If this astonishing admission had been made during the first year of the invasion, Blair would have had to resign. It was an admission that the British had followed the Americans into a war for which that they did not know the political end.

One Response to Iraq 10 Years On: The Benefit of Hindsight