West’s 1% salivates over spoils of the Libyan 99% 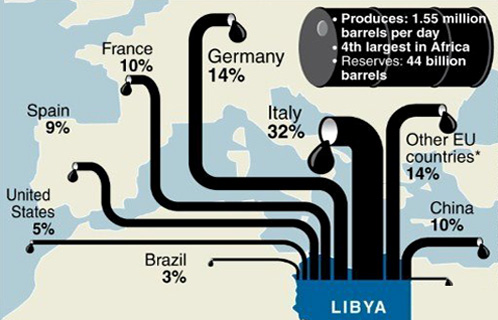 Question: Who is set to financially benefit from the sacrifices of the 99% (okay, maybe it wasn’t quite that many, but you know what I mean) of Libyans who risked their lives in the revolution? A: The 1% of American and European CEOs, especially the fossil fuel industry:

The guns in Libya have barely quieted, and NATO’s military assistance to the rebellion that toppled Col. Muammar el-Qaddafi will not end officially until Monday. But a new invasion force is already plotting its own landing on the shores of Tripoli. Western security, construction and infrastructure companies that see profit-making opportunities receding in Iraq and Afghanistan have turned their sights on Libya…

Libya has Africa’s largest oil reserves, which eventually should mean a steady supply of cash.

Remember the “no blood for oil” anti-Iraq War slogan from nine years ago? Seems like the U.S., U.K., France, and their allies paid heed. No Western blood was spilled – only Libyan! – for The West (under cover of NATO bombing) to gain access to this impoverished country’s fossil fuel reserves.

Whatever one thinks of The West’s role in this revolution, it should not have a free pass to engage in more oil imperialism. Soon enough, the “99%” of Libyans may well be marching in the streets, demanding an eviction of the American and European oil-garchies. #OCCUPYLIBYA, coming soon?