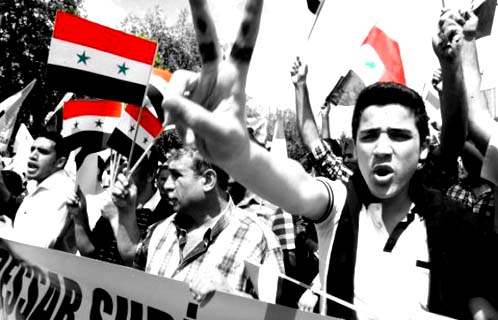 Syria’s increasingly brutal crackdown on anti-government protesters begs the question: when does inaction morph into complicity?

The evidence seems overwhelming: teenagers are tortured, mutilated and killed; dissident soldiers are shot in the head; detained protesters in handcuffs are kicked and head-stomped; some 1,400 protesters are believed to have been killed; and up to 7,000 people have fled across the border into Turkey with thousands more camping out at the border.

US and European sanctions on Syrian President Bashar Al Assad and his cohorts have had only immediate symbolic value and may perhaps start hurting over time, but do nothing to stop the atrocities. Neither does a discussion in the perpetually ineffective Arab League on whether or not to bar Syria from its meetings. The United Nations Security Council has been rendered impotent by China and Russia’s refusal to attend a meeting to discuss a resolution that would condemn the violence in Syria and demand that it grant access to humanitarian organizations.

The long and short of all of this is that Mr. Assad really doesn’t have to care as long as it doesn’t matter to him what the world thinks. There is no real pressure on him to rein in his security forces or start addressing protesters’ demands for greater political freedom and economic opportunity. The international community may not like what he is doing to his own people, but is unwilling for a host of different reasons to increase the price he has to pay, let alone intervene to call a halt to his callous bid to hang on to power at whatever cost.

There is little doubt that everyone in the international community is horrified by the pictures being smuggled out of Syria documenting Mr. Assad’s brutality. There is equally little doubt that different members of the community limit themselves to at best symbolic protests for what are ultimately short-term benefits.

Fact of the matter is that whichever way the crisis in Syria goes, Mr. Assad’s days are numbered. Even if he were to survive the current crisis and cow the protesters into submission, it is hard to see how he can remain in power without the use of force. Stability, let alone economic development and greater freedom have been rendered lofty, unrealistic goals in an Assad-ruled Syria. More likely is continued violence with peaceful protests increasingly morphing into a terrorist campaign or armed resistance.

None of this constitutes a prospect that serves the purpose of democracies verbally committed to political and economic reform in the Middle East and North Africa. It may serve to calm Russian and Chinese fears that the six-month old anti-autocratic revolt sweeping the Middle East and North Africa could spark anti-government protests in their own backyards. But a Syria that is tearing itself apart hardly functions as a wedge to thwart Western interests in the region.

The moral argument is clear. The longer the international community stands by, the more it becomes an accomplice to the crimes being committed by Mr. Assad’s regime. One needs only to replace the words Libya and (Libyan leader Col. Muammar) Qaddafi with Syria and Mr. Assad in the statements on Libya of US President Barack Obama as well as European, Chinese and Russian leaders to wonder what difference there is in the crackdowns in Libya and Syria.

The Libyan situation prompted the international community to support a United Nations imposed no-fly zone in Libya. On Syria, these leaders can’t even agree on a condemnation that places no obligation on them to do anything.

The potential practical and political responses to the bloodshed in Syria are far more complex. What is evident is that moral outrage has yet to reach a depth and breadth that forces world leaders to put their money where their mouth is. Much of world leaders’ condemnation is as much designed to notify Mr. Assad of their displeasure as it is to ensure that moral outrage does not develop to the degree that their own people demand actions instead of words and symbolic gestures.

Demanding action is easy, acting is far more difficult. The no-fly zone in Libya has bolstered the country’s rebels and limited Mr. Qaddafi’s ability to defeat them, but not to the degree that the Libyan leader can’t take time out for a chess game against the head of the International Chess Federation.

Few doubt that a full scale international attack on Mr. Qaddafi’s forces rather than the restriction of force to the use of air power would ultimately depose the Libyan leader. The problem is that with the wars in Afghanistan and Libya, a fragile economic recovery and lack of public support for further military engagements, Western powers are stretched thin.

British Admiral Sir Mark Stanhope has warned that his country’s will not be able to sustain its operations in Libya for another three months without making cuts elsewhere. The US House of Representatives has cut off funding for US operations in the enforcement of the Libyan no-fly zone for domestic political and procedural reasons.

All in all, putting an end to the Syrian regime’s brutality is not only morally right but would also ultimately serve the interests of opposed members of the international community. Nonetheless, the sad reality is that even if nations would look beyond their immediate short-term interests and rivalries, there is really little they can do.

This article was originally published as a special to Al Arabiya.