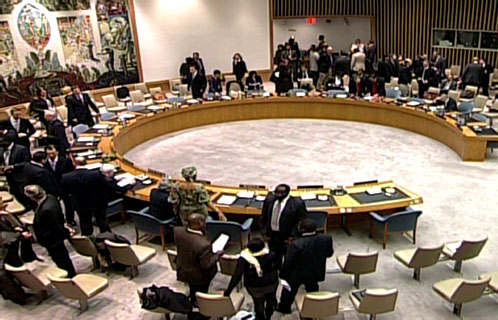 All talk, virually no action: Leaders debate over next steps

Like millions of others, I’ve been watching, transfixed, as the drama in Libya plays out. I’ve also been listening to pundits and politicians on various channels as they debate and comment on the current situation.

There appears to be a wide consensus – Venezuela and Zimbabwe excepted – that Colonel Gaddafi and his regime have lost their legitimacy and should fall. There is also wide concern that without external support, the rebels will eventually be crushed, with massive loss of life.

The Arab League is in favour of a no-fly zone.

The European Union is divided on the issue. The two main advocates are Cameron and Sarkozy. Merkel is against.

There is no national consensus in the US about the advisability of American intervention. John McCain says go for it – we can do it. A leading congressman says wait a minute – we don’t know who these rebels are. Obama keeps his options open.

The United Nations Security Council has not been polled – but it is possible that Russia and China would veto any resolution endorsing the no-fly zone.

Opinion among Libyan opponents of Gaddafi has also been divided. Both outside and inside their country, Libyans have asked to be able to complete the job of overthrowing Gaddafi without foreign intervention. But as the tide has turned against them in the past week, rebels in Benghazi have begun pleading for a no-fly zone.

There has also been much debate about whether a no-fly zone would be effective in bringing down the regime. It would stop the fast jets, but perhaps not the low-flying helicopters.

Other military options are also being debated. Military hardware and training – particularly anti-tank and anti-aircraft hardware? One of the options, for sure, but there is concern in the West about this hardware “falling into the wrong hands”. Troops on the ground? Western powers would be loath to participate, for fear of being sucked into yet another protracted military quagmire.

Then there are the calculations about the state of the regime itself. Are there divisions within Gaddafi’s family – between Saif, Khamis and Hannibal? Has the referral of the regime’s activities for investigation by the International Criminal Court backed the regime into a corner, and increased the likelihood of resistance to the end? What about the loyalty of the military forces around Gaddafi – are they close to a tipping point in the interest of self-preservation? Which of the options would push them closer to that tipping point?

Behind the scenes in the security agencies and foreign ministries of the major powers, other questions are doubtless being asked. What is the likely outcome – the rebels crushed, Gaddafi triumphant? Protracted civil war? Elements of the regime turning on Gaddafi and coming to terms with the rebels, thus leaving some form of regime structure in place? Disorganised meltdown caused by military defections followed by the complete destruction of the regime and its structures? And finally, which of these scenarios will be in our best national interest?

So it is no wonder that while people are dying in Libya, politicians are hesitating.

We’ve been here before. Bosnia and Rwanda, for example, where international action came too late to save thousands in the former case and millions in the latter.

In this post I have no startlingly original solutions to offer the politicians – I’ve merely tried to provide some context around the seeming failure of the world outside Libya to take swift and decisive action.

Much as the ordinary person on the street is outraged at the death and destruction being wreaked by Gaddafi’s regime, the fact is that for professional politicians, moral issues, and personal feelings about human suffering, often take second place to what they believe to be national interests, and their own desire to remain in office.

But there are two questions for which I have not heard answers in the media. Whether that’s because they are stupid or naïve is for you to judge.

Here’s the first question. The Arab League has voted in favour of a no-fly zone. Given that Libya is part of a pan-Arab resurgence of pride and self-determination, has the Arab League considered the possibility taking the lead in intervening militarily? There are few Arab nations that would be sad to see the back of Gaddafi. The most powerful military force in the Arab world is right next door to Libya – Egypt. Saudi Arabia – the leading buyer of military hardware in the Middle East over the past couple of decades – also has considerable capability. King Abdullah, whom Gaddafi tried to have assassinated a few years ago, will not be his greatest fan.

The Arab League seems to be expecting the West to do its dirty work. Its stated reason would be that the West has greater military capability. But would not the intervention of brother Arab nations be more welcome and acceptable to Libyans than Western airstrikes? And as a way of helping the rebels to hold the line until the more sophisticated military powers finally agree to intervene, would not Egyptian ground intervention with air support be feasible?

Benghazi is approximately 500 kilometres away from Alexandria. What if Egypt sent a column of, say,  a hundred tanks and supporting infantry to aid the defence of Benghazi? At the same time, what if Egypt and Saudi Arabia were to send several squadrons of fighters to airbases under the control of the rebels, thus enabling them to fly defensive sorties against the Libyan air force?

If militarily feasible – and I accept that it’s a big if – such a move might trigger the tipping point that finally does for Gaddafi. The Arab world would be able to congratulate itself for having applied an Arab solution to an Arab problem. The whole political dynamic of the Arab world being under the thumb of external influence would be demolished.

The second question is triggered by an interview with Noam Chomsky on last night’s BBC Newsnight programme. Chomsky is a prominent American academic. He has been a vocal opponent of American foreign policy since the Vietnam War. He believes that the American reaction to recent events in the Middle East and Africa is no different from its handling of the downfall of previous autocratic regimes with which it has been allied. The model, he says, is to support the regime for as long as possible. When that position is no longer tenable, announce fulsome support for the new leaders while doing its best to ensure that elements of the old regime are still in place. The objective? Continued stability.

So the question is this. Are the US, China and Russia, three of the world’s most powerful military and economic powers, deliberately sitting on the fence in the hope that their inactivity will lead to one of the two outcomes they believe are most likely to lead to the restoration of stability in Libya? That first is that Gaddafi crushes the rebels, the world eventually forgives and forgets, and business resumes as usual. The second is that Gaddafi and his family are replaced by some of his more respectable henchmen, who come to terms with the rebels.

The military success of the rebels might, in the eyes of the three powers, be the least desirable outcome if the overriding concern is stability. As the US congressman said, they don’t know who they would be dealing with.

I’m not suggesting that America, Russia and China are acting in concert. Each will be pursuing its own agenda.

But as always, the politicians will only take the lives of the Libyan people into account to the extent that their political action or inaction affects their standing in the eyes of their domestic constituencies, and impacts on the reputation and influence of their countries abroad.

And that, sadly, is what realpolitik is all about.

One Response to Realpolitik: Leaders Fiddle While Libyans Burn