One Jewish Woman’s Fight for Palestine 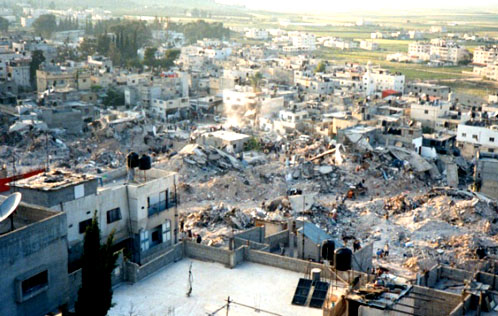 For Jennifer Loewenstein, April 19, 2002 was a “waking nightmare”. She stood silent at the edge of the camp, in disbelief—and horror.

Listening to the sound of wailing, she watched as medical workers lay out the bodies of the dead. The corpses, wrapped in white, were loaded onto the back of a pick-up truck.

“I will never forget this time,” Loewenstein recalls.  “I stayed in the camp for two days, picking through the ruins and debris of people’s former lives—watching children and families look for their belongings—anything they could salvage from the wreckage.”

Loewenstein was in Jenin.

She had spent much of the previous two years working as an editor and freelance journalist at the Mezan Center for Human Rights in Gaza. During that time, she traveled frequently to the Rafah refugee camp to visit friends. It was in that way that she came to know Rafah so well and later started the Madison-Rafah Sister City Project in December of 2002.

But Loewenstein’s decision to take on the plight of the Palestinian people was not an easy one. She has since been shunned by her community and accused of being a “terrorist sympathizer” and “self-hating Jew”—a term she considers as ludicrous as calling her a “self-hating human” for opposing human rights abuse.

Despite this opposition, Loewenstein continues her struggle to expose an injustice she wasn’t always aware of herself.

“I never really knew much about the plight of the Palestinians until I was much older,” says Loewenstein. “I didn’t begin to question all the information I’d gotten on Israel and on Arabs until I got to college (at the Hebrew University in Jerusalem).”

Loewenstein grew up in a secular Jewish family, but was instilled early on with a concern for Israel. She still remembers the day when her favorite dress was sent to her cousin overseas. She was only six, but gave up the dress because her family in Israel needed it.

“One year at Christmas/Hanukah time we refused to celebrate either holiday,” remembers Loewenstein. “Instead we made a ‘Peace Tree’ and celebrated our hope for peace.”

Her mother’s concern for peace was complemented by her struggle for civil rights. Because it has devastated her mother so much, Loewenstein never forgets the day that Martin Luther King Jr. was assassinated.

It was this early awareness of civil rights that Loewenstein carried into adulthood and would bring with her to Jerusalem. In 1981, she traveled to Israel for a semester-long study abroad program. During her stay she was exposed to a world she never knew existed.

One day during a tour of Gaza Strip instead of listening to the tour guide, Loewenstein sat at the back of the bus and looked out the window. She discovered “thousands of people living in tents and shacks.” Loewenstein was appalled.

“It was the first time I had ever seen this kind of poverty and the first time I understood the meaning of ‘occupation’ in a concrete way,” says Loewenstein. “I saw a woman with about three children carrying a jug of water on her head and a soldier watching her and the others around her with his gun slung over his shoulder.”

It was at that moment that she first realized “something was terribly wrong.”  But nothing she saw that day would prepare her for what she experienced in April of 2002.

Loewenstein was among the first internationals—and only a handful of Americans—to enter the destroyed Jenin refugee camp the day after the Israeli incursion.

“When I got into the camp area I could not believe my eyes. It had been devastated. Thirteen thousand people had lost their homes,” describes Loewenstein. “The camp was destroyed beyond recognition—flattened into a heap of rubble and dust. The smell of death was everywhere.”

What was most traumatic for her was the discovery that many of the dead were unarmed civilians. “Not all the dead were fighters,” says Loewenstein. “Some were old men, women and children.”

The horrors that Loewenstein experienced in Jenin made her struggle all the more urgent—a struggle she fights, not as a Jewish woman, but as a human being.