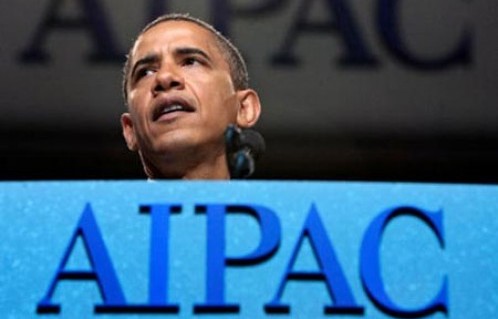 Yesterday’s speech by Barack Obama to AIPAC was an historic speech, maybe the most remarkable speech he has ever given. For a masked and calculating man, it was incredibly sincere. For just below the politically-hogtied phrases and praises for the Israel lobby that controls his future, it was filled with rage. When he spoke over and over of a Jewish democratic state and then said that the world was changing, and spoke about that Jewish state upholding universal values that Americans also share, I heard vicious irony: You want a religious state, you have the power to demand it of me, because you are the Israel lobby, well time is running out on you.

And when he finished his speech by reminding the Jews before him that we are fellow Americans, I thought it was a jab at their dual loyalty.

The Israel lobby has never been so naked. Walt and Mearsheimer’s estimations of its character 6 years ago look meager now when the Wall Street Journal writes openly of “Jewish donors,” something Walt and Mearsheimer refuse to say, and when Obama begins his speech by reminding AIPAC of what a good boy he was back in Chicago 2004, when he reached out to “Rosey” when he thought about running, Lee Rosenberg, the slightly cadaverous media executive who brought Obama to the podium today, and is surely hated by many in the room for doing so.

And all the boilerplate of the speech, the endless celebration of the deep ties between Israel and the U.S., came off as so much boilerplate, lobby speak. I know I have to say this, and you know it, too, Obama is saying, but it is boilerplate.

He is angry. I thought he wasn’t going to mention the word 1967 or the controversy it set off the other day. But he surprised me by saying it 3 or 4 times and going right into the controversy. So he is angry at being shown up by Netanyahu, whom he mentioned only once, in passing. He is angry that as John Mearsheimer said yesterday at Move Over Aipac, Netanyahu has taken on Obama three times and defeated him three times.

The beauty of the speech for me was about the Arab spring and the impatience of history.

Obama said that time is running out on the endless peace process. I was abusing him through most of the speech but when he said, “The world is moving too fast,” I cried out in pleasure. Obama knows what we on the left know: that because of the Arab spring and the millions on the Arab street whose demands he dignified today, and because of the disgust of peoples everywhere with the American-led peace process– in Latin America, Europe, Asia and the Arab world, as he reminded the lobby– the world is sick of a Jim Crow state. When I go to Europe this week, this is all people will ask me about, he said, veiling anger.

And when Obama spoke twice of the “demographic” realities west of the Jordan, he was only echoing what Mearsheimer said the day before, there is a majority of Palestinians between the Jordan and the sea, and this is your last chance to gerrymander a Jewish majority on the vast majority of the land that you already ethnically cleansed. I believe he spoke these words about demography with rage– how can an anti-racist say racist phrases without rage? And when he said that Israel and the U.S. share the background of claiming their freedom against overwhelming powers – the British, the Arabs—I think he was offering an ironical history lesson. Obama doesn’t believe in a Jewish democracy any more than he believes in a white or a Christian democracy. He will say these words over and over, in bitterness, to the lobby that has got him politically hogtied because he depends on, according to the Wall Street Journal, Jewish money, and he may well believe in partition for the same reason Mearsheimer does, to head off violent cataclysm in Israel and Palestine, but he is on our side in his heart. On the side of the world moving forward with progressive ideals.

And when he talks about the world’s impatience with an absurd peace process—a peace process that Christiane Amanpour said today is the definition of insanity, and that Steve Walt said yesterday at Move On Aipac seems as plausible a means of producing two states as our plans to colonize Alpha Centauri—it is his own impatience. The lobby has been exposed and Barack Obama is doing all that he can to open up the American discourse to a discussion of its values. So I’m grateful for the speech today