Libya: The Battle for Credibility Has Just Begun 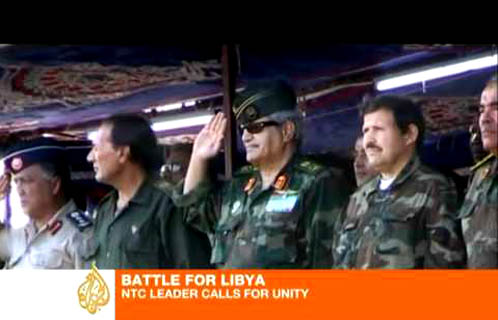 A week ago today, after a rapid advance on several fronts, the fight for control of Libya appeared to be over. The battle was finally taken to Tripoli on Saturday in what the media labelled “the final push” and by the time the sun set on Sunday the the six-month brutal and frequently stalemated campaign appeared to be at an end; Tripoli had as good as fallen, pro-Gadaffi forces had largely melted away, people were celebrating in the streets and Gadaffi’s two eldest sons were supposed to be in rebel custody.

A week later however and the fighting continues. There are conflicting stories on the ground regarding  how much of the city is still under Gadaffi’s control, with the pro-Gadaffi side now claiming up to 90% of the city is theirs. Certainly the battle has not stopped, in parts it still rages, with correspondents in the city reporting amidst frequent gunfire and explosions.

The contradictions of the last few days do not end there. Mohammed, Gadaffi’s eldest son, after surrendering to rebels and then being interviewed by Al Jazeera has reportedly escaped, and after repeated assurances from the NTC, including from it’s chairman, Mustafa Mohammed Abdul Jalil, that Saif al -Islam, Gadaffi’s second and most politically-active son, was in rebel custody and “being kept in a secure place under close guard until he is handed over to the judiciary” he has proven himself to be still at large. He appeared before foreign journalists in the Rixos hotel in Tripoli to “refute the lies” and to claim that his father’s government had “broke the back of the rebels. It was a trap,” although what exactly “the trap” was remains unclear. He went on to reassert “We are winning”.

Saif al-Islam’s grip on reality has long been under question, but his words are likely to give a confidence boost to many within the pro-Gadaffi camp, as well as to affirm their belief that the rebels are liars, and not fit to lead. Within the NTC forces themselves, this news appears to have caused confusion, with questions being asked regarding how he escaped, or whether he had ever even been captured. If the former, did he have help from disloyal elements within the NTC, and if the latter, from where did the report originate, and how did it become so widespread?

He has long been a figure of hate for the anti-regime forces, and as big as a boost as his alleged capture gave them, his reappearance is an even bigger knock to their confidence. His capture appeared to be a testament to the deluded state of the Gadaffi bubble, coming as it did mere hours after his statement that “I see ourselves as victorious, I see our position is strong”, but his reappearance will cast uncertainty about whether it was right to so easily dismiss his earlier assertions.

“Libya will look like Saudi Arabia, like Iran. So what?” he sneered with a manic gleam in his eye, in one of his sporadic TV appearances in July, before going on to prophesies that Libya would know peace by Ramadan due to his imminent pact with Islamist forces within the rebel movement. These comments have clearly been disproven, as we are now nearing the end of Ramadan and the streets are far from peaceful, but it did provoke the rebel leadership into a denial which acknowledged that a meeting with Saif al-Islam had taken place, but with a different outcome. This latest misstep could cause rebel supporters to reassess the competence and unity of their leaders, which the NTC can ill afford at this crucial juncture.

The Libya that emerges from this conflict will be in dire need of rebuilding and there are those who doubt the NTC is up to the job, and with this most recent debacle, their numbers may grow. Having faced a crisis at the end of July following the murder of General Abdel Fatah Younis while he was in the custody of a militia group contracted by the NTC to bring him to Benghazi to face questioning, this second occurrence of people slipping through their fingers casts serious doubts on the capabilities of the rebel leadership.

Pro-Gadaffi sentiment within Libya, especially in Tripoli, remains pervasive within a significant minority of the population, and they will draw confidence from these events. Even if the army is defeated, sleeper cells will remain, and it could be a long time before Tripoli knows true peace. The trials currently taking place within Egypt and Tunisia demonstrate that reconciliation does not come easily. Tracing those guilty of war crimes could take many years, and resentments will take no less time to heal.

Cracks within the rebel alliance may have been papered over to allow the (mostly) smooth functioning of the NTC, but in the period of rebuilding they may begin to show. The NTC consists of many with ties to the old regime, and also some with an Islamist bent. Libya is a tribal society, and also has a significant indigenous Amazigh (berber) population, who were once driven from their homes and land by Gadaffi as he followed a vehemently pro-arab agenda. They were subsequently among the first to revolt against Gadaffi, and have played a powerful role in the struggle.

In the future these differences will form the basis of healthy democratic struggle, but in the meantime these factions must continue to work together for this “final push” to liberate Libya from the clutch of a tyrant, and then for the following months to restore confidence in the NTC, and to build a constitution which will incorporate the liberal ideal of equality and freedom that so many have fought for.