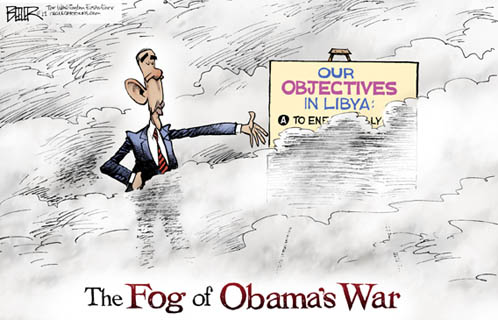 Many American politicians and news pundits have been eager to take too much credit for the overthrow of Mu’amar al-Qadhafi. At Democracy in America:

all of this talk of winners and losers seems ridiculously premature, and embarrassingly insular, to your blogger (apologies to my colleague). While recent events appear to augur a promising future for Libya, it is way too soon to tell. “At such moments, any temptations toward euphoria have to be restrained by a recognition that future developments are unpredictable and potentially unpleasant,” says a very reasonable Jeff Weintraub. “Overthrowing oppressive and tyrannical regimes is often hard, but successfully reconstructing the societies that they’ve damaged, distorted, and poisoned by their rule is usually even harder.” And yet we get headlines like this from Steve Clemons: “Huge Win for Libyans, A Win for Obama, Challenges Next“. Challenges next? By that logic, Iraq was a win for George Bush, and we’ll consider those pesky challenges that followed separately. In reality, though, you cannot separate the aftermath from the overthrow. They are a result of the same policy, put in place to deal with a situation that in this case is not yet settled.

This points to some of the bigger problems in American political culture. Most elected officials seem to be in a constant campaign mode, counting each move in terms of election intervals. Long-term planning suffers; so does perspective. Go to war? The qualitative outcome of the Libyan crisis is less important to many than how it “plays” with the public — perviously rather poorly and perhaps now somewhat better. Politicians are opportunists by nature, of course. And being elected does neither requires nor necessarily reflects genius or strategic acumen. It takes only primitive cunning and organizational skill. An early interpretation of how the United States got involved in the Libyan conflict was that the president and defense establishment were suckered in by the French and British whose position was backed up by people with an ideological bias for intervention like Samantha Power and Susan Rice (the former earned a scathing profile in The National Interest). The important questions around the politics of the intervention are largely subsumed by petty bickering over who wins who loses – who will get a bump in the polls? Some people find this exciting or interesting.

In any case, this was not a widely popular excursion in the United States. The incentive to exaggerate the American role and to build a trumphant narrative is high on one side; the opposite push to down play its overall relevance and to point to the “lack of a strategy” for Libya on the other side will also grow. There are people who would like to become president at Barack Obama’s expense, of course.

The eagerness to declare the Libyan problem solved or over (which is somewhat waning) likely results from popular ignorance of Libya and the region generally, not simply among the public, but also in the political class. There were relatively few well known public personalities who could speak intelligently about Libya in America before the uprising there (with very notably, mainly academic exceptions). Now everyone from Wes Moore to Whoopi Goldberg has an opinion and a perspective on Libya and what might happen there. People with more perspective are more restrained in their acknowledgement of the role NATO played and ought to (or ought not to) play going forward and how helpful the kind of aggressive nannying advocated by some people might actually be:

I have “news.”  Wars are messy, uncertain things.  They “move” in fits and starts.

Qathafy’s government is finished.  This has been a very successful effort.  What sort of government will the Libyans make?  It is not our business.  The only demand we should have on the new Libyan government is that they do not harbor enemies of the NATO alliance.  That includes us.

Do not give the Libyans money.  We do not have it to give.  Our instinct is to want to “control,” “reform,” and fund.  No. Give them back their own money, the money that is now impounded all over the world and then get out of their way so that the petroleum industry can make the oil and gas flow for export again.

And then there are bigger concerns. For instance, Andrew Exum worries:

Many members of the Obama Administration, especially the veterans of the Kosovo Campaign, were more sanguine about the open-ended application of U.S. military power in Libya than I was. I am glad the Qadhdhafi regime has fallen, but I worry we have reinforced a precedent where we do not feel the need to carefully think through our strategic goals (to include our desired end states) and assumptions before going to war. Because giving the U.S. military unclear guidance to prosecute open-ended military interventions is a recipe for a serious crisis in civil-military relations, we might not want to do that next time.