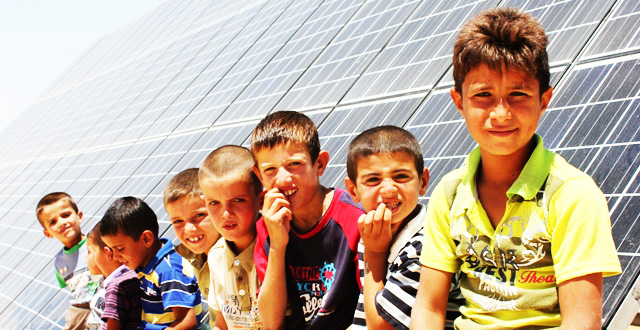 The Israeli Occupation authorities are planning to demolish renewable energy installations in Palestinian villages in the Occupied West Bank. The projects were installed by an Israeli NGO, ME Comet, and paid for by German aid.

Although the Israeli government of PM Binyamin Netanyahu says the projects must be torn down because they have no permit, one shouldn’t have to have a permit to have electricity. Moreover, the government deliberately does not give Palestinians building permits, because it wants them to emigrate. The Guardian writes:

“According to figures from the civil administration quoted by the pressure group Peace Now, 91 permits were issued for Palestinian construction in Area C between 2001 and 2007. In the same period, more than 10,000 Israeli settlement units were built and1,663 Palestinian structures demolished.”

Many of the world’s poorest people, 1.6 billion, are are turning to solar to power batteries that recharge cell phones and power lights at night, and this path is cheaper for them than paying for kerosene/ paraffin.

Palestinians, who are kept as stateless chattel by Israelis that hope to drive them out of their homes, deserve simple amenities like electricity. As long as the Occupation continues, however, they won’t get treated like human beings. They will be treated like pests and rodents, with faceless bureaucrats exemplifying Arendt’s ‘banality of evil,’ and plotting out ways to expel them and steal their land and water.

This ongoing crime against humanity committed by Netanyahu is the real reason he wants to divert world attention from his vicious policies toward helpless Palestinians toward conflict with Iran.