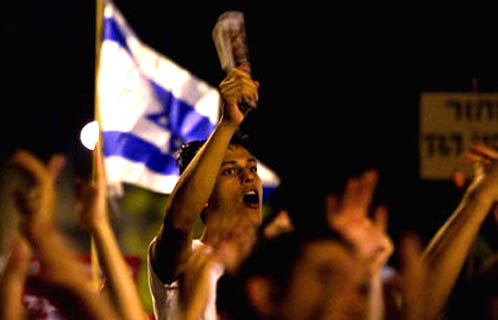 Israeli writer Uri Avnery recently wrote an article entitled ‘How Godly Are Thy Tents?’, which began with the words, “First of all, a warning.”

The reference was made to the tent cities that have sprung up across the country by middle class Israelis demanding change and reforms. The organizational style of these demands was not entirely different from Arab uprisings. To everyone’s surprise, the limited Israeli mobilization, which extended from concerns about sky-rocketing real estate prices to calls for ‘social justice’, was seen as Israel’s Tahrir Square moment. The movement was yet to articulate a political agenda, although such enunciation would have been a natural progression.

So what was Avnery’s warning about?

The “social protest movement is gathering momentum,” wrote Avnery.  “At that point, there will be a temptation – perhaps an irresistible temptation – to ‘warm up the borders’. To start a nice little war. Call on the youth of Israel, the same young people now manning…the tents, to go and defend the fatherland.”

It was an unnerving warning, not only because it came from Avnery, a veteran well-versed in his understanding of the Israel ruling class, but also because it actualized in its entirety a few days later.

The ‘war’ had indeed commenced, starting on August 18. The ‘provocation’ had supposedly demonstrated without doubt that Israel’s security was greatly compromised and that the small state with ‘indefensible borders’ was paying a high price for Gaza’s armed intransigence and Egypt’s post-revolutionary chaos. Israeli sources reported that a large number of militants had crossed Sinai into Israel’s Red Sea resort of Eilat on Thursday (August 18), opening fire on two buses carrying Israeli soldiers. The passage was implacably coordinated, thus the ability of these bold attackers to kill and wound soldiers and other Israelis. According to the Israeli version of events, some of the attackers were killed, but others managed to flee back to Egypt. This forced the Israeli military to pursue them in an extraordinary chase, which mistakenly killed three Egyptian military personal.

Israeli sources, seemingly clueless to the armed men’s infiltration of a high security area, immediately provided precise information about the attackers. Instant consensus was also reached about the attackers’ link to Gaza. Per the massive strikes on many Gaza targets, it seemed as though the entire Strip was being blamed and punished.

The outcome was most predictable, albeit tragic. Israeli warplanes flew back over the Gaza sky, drones roamed uncontested, and the Palestinian death toll augmented. The whole miserable scene of killed civilians, mutilated children and burnt buildings was once more upon us. The chorus of support for Israel and condemnation of Palestinians from Washington was reminiscent of a history that never stops repeating itself.

But before delving into counter-arguments, one is tempted to question the conveniently situated Israeli wars of ‘self defense.’ How different is this latest ‘nice little war’ from the horrifying Israeli invasion of Lebanon in 1982? When Ariel Sharon requested an American green light to attack Lebanon, Alexander Haig, US Secretary of State under President Ronald Reagan, insisted Israel must possess a ‘credible provocation’ before leading such a mission. Moreover, the case made to justify the war on Gaza in 2008-09 Operation Cast Lead also had its own ‘credible provocation’. In fact, all of Israel’s wars are sold to the public within this neat package which actually holds little credibility.

This time the provocation had to be convincing enough to justify multiple Israeli strikes on all of Gaza’s factions, as well as politically vulnerable Egypt.

Why is Israel bent on discrediting Egypt, exploiting the most sensitive period of its modern history, and destabilizing the border area so as to show Egypt’s failure to ensure Israel’s border security, as stipulated in the Camp David treaty?

Reportedly, all of Gaza’s prominent factions denied any responsibility for the Eilat attacks, including the Popular Resistance Committees (not affiliated with Hamas), which was accused by Israeli of being behind the attacks.

Responding to Israel’s killing of Egyptian officers, and under pressure by thousands of porters, Egypt pulled its ambassador out of Israel on August 20. In Israel, the discussion is now shifting to security and the need to complete construction of its 200km barrier at the border with Egypt, ostensibly aimed at blocking African immigrants from sneaking into Israel. Strangely, Egypt, which stands accused of allowing hundreds of militants into Israel from Sinai, had kept an eye on the border despite the effects of the revolution on security throughout the country. On July 7, for example, and on August 11, Egyptian security reportedly killed an Eritrean man and a Sudan migrant respectively for trying to cross the border. Many others have been apprehended during past months as well.

The army’s ability to strike down lone migrants, while supposed laxity allowed for the infiltration of hundreds in one instance raises more questions than it provides answers.

Some hidden hands seem to be orchestrating chaos in the city of Arish and the rest of the Sinai area. This includes the peculiar daytime attack by hundreds of armed met at police stations in Arish on July 29, which killed several Egyptian officers.

While deliberate chaos was being engendered in Sinai, fear was returning to Gaza as it was promised another Israeli military assault.

On August 9, residents of the impoverished Gaza Strip feared attack by Israel. The fears were not only based on repeated threats by Israeli officials, but also on a mysterious telecommunication blackout that day which cut off all Internet, mobile phones and international landlines for hours, according to Ma’an news agency. “Meanwhile, residents of Gaza near the border with Israel said army bulldozers were seen operating shortly before communications went offline,” Ma’an reported.

Why did Israel cut Gaza’s communication off? Was the ‘credible provocation’ being concocted then? Why did Israel fail to provide a reasonable explanation for the blackout? More, why the attempt at embarrassing, provoking and perhaps dragging Egypt into a border confrontation at a time when Egypt is attempting a transition towards democracy?

It ought to be said that “new Egypt’ was also credited for facilitating Palestinian unity, a first step towards taking Hamas out of its international isolation.

Is it not then possible that Israel’s ‘nice little war’ was a response to such a dangerous shift in Egyptian policy towards Hamas – and Palestine in general?

One Response to Israel’s ‘Nice Little War’: Gaza, Egypt in Range of Fire