Index: Israel Most Militarized Nation in the World 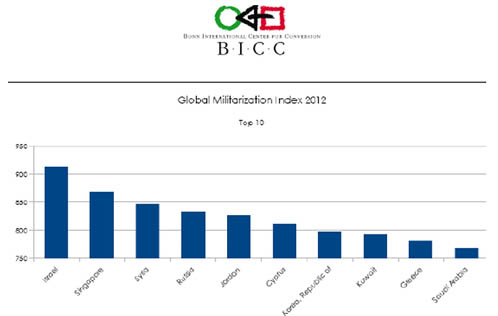 The Bonn International Center for Conversion maintains the Global Military Index, which lists the nations of the world according to the level of militarization of their societies. Coming in first again in 2012 is Israel.

Here are the criteria used to determine a country’s ranking:

With its Global Militarization Index (GMI), BICC is able to objectively depict worldwide militarization for the first time. The GMI compares, for example, a country’s military expenditure with its Gross Domestic Product (GDP) and its health expenditure. It contrasts the total number of military and paramilitary forces in a country with the number of physicians. Finally, it studies the number of heavy weapons available to a country’s armed forces. These and other indicators are used to determine a country’s ranking, which in turn makes it possible to measure the respective level of militarization in comparison to other countries.