Give Iran the Bomb to Give the Region Stability 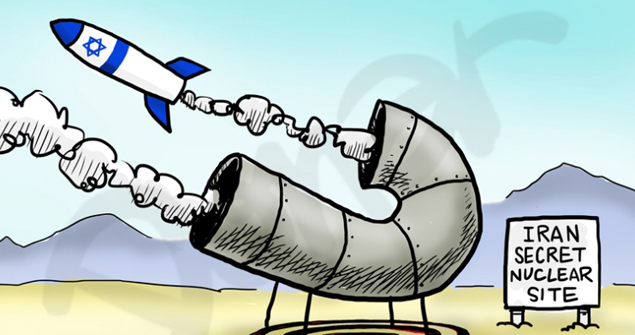 All of us who are trying to make the world see reason about Iran’s alleged nuclear threat and the likelihood of war, pussyfoot around the idea of Iran actually getting a nuclear weapon.  What I love about this Foreign Affairs article by noted Columbia University international relations theorist, Kenneth Waltz, is that he turns accepted wisdom on its head and comes right out with the contrarian notion in his title: Why Iran Should Get the Bomb, Nuclear Balancing Would Mean Stability:

Most U.S., European, and Israeli commentators and policymakers warn that a nuclear-armed Iran would be the worst possible outcome of the current standoff. In fact, it would probably be the best possible result: the one most likely to restore stability to the Middle East.

Israel’s regional nuclear monopoly…has long fueled instability in the Middle East. In no other region of the world does a lone, unchecked nuclear state exist. It is Israel’s nuclear arsenal, not Iran’s desire for one, that has contributed most to the current crisis. Power, after all, begs to be balanced.

I’ve argued here on many occasions that the fact that Israel has the bomb is not a stabilizing force in the Middle East, as Israel argues, but precisely the opposite.  If Israel exercised its military force judiciously and attempted to live at peace with its neighbors, then it might be possible to argue that.  But a country that starts a war every few years with a different front-line neighbor each time isn’t a responsible member of the nuclear club.  Which explains, in part, why Israel has refused to join the NPT.  It knows that it would be expected to follow the norms that the rest of the powers do.  It doesn’t want to be bound by such strictures.  So it refuses.

Waltz raises a major concern regarding one possible outcome of Iran’s nuclear program: it might stop short of a full breakout capacity, but maintain all the technology that would be necessary to assemble a weapon on short notice as Japan has done.  But the author correctly notes that while this would likely satisfy many of the western powers currently aligned against Iran’s nuclear program, it will not satisfy Israel, which opposes even Iran’s right to enrich uranium, let alone approach the nuclear threshold.  So an Israeli attack will always loom even if the west makes peace with Iran’s opaque nuclear status:

Israel would be less intimidated by a virtual nuclear weapon than it would be by an actual one and therefore would likely continue its risky efforts at subverting Iran’s nuclear program through sabotage and assassination—which could lead Iran to conclude that a breakout capability is an insufficient deterrent, after all, and that only weaponization can provide it with the security it seeks.

There would, of course, be another way for Israel and its neighbors to address the nuclear issue that would restore a power balance and end the nuclear arms race in the region: a nuclear free zone.  Avner Cohen has argued for this option.  But of course no Israeli general or politician is about to give up his goodies.  In the macho society that is Israel, such behavior would be considered an unpardonable sign of weakness toward the Arab/Muslim enemies that surround it.

The Foreign Affairs article recites the litany of mistaken claims and notions about Iran’s nukes that have been advanced by everyone from Barack Obama to Bibi Netnayhau and Waltz refutes every one admirably.  One of his more interesting rebuttals concerns the claim that an Iranian bomb would start a regional arms race.  In fact, he points out:

If an atomic Israel did not trigger an arms race then [in the 1960s when Israel first developed its nukes], there is no reason a nuclear Iran should now.

The likely outcome would be that other states in the region would see the enormous price that Iran paid in blood and treasure and proceed very cautiously toward nuclearization.  Right now, the only state that has a realistic opportunity to pursue such weapons might be Turkey and it has shown no interest in doing so.  The notion that Saudi Arabia or Egypt would do so, as pro-Israel war hawks have claimed, is ludicrous.  They have neither the scientific know-how, the financing (Egypt), or political will to do so.  They would have to begin a huge multi pronged scientific program that would take years to reach fruition, and would likely only do so if they felt directly threatened by the other nuclear power in the region, Israel.  So far, that hasn’t happened and if Israel maintains caution in its relationship with them, it shouldn’t.  But will it?

Here is further wisdom from Waltz:

In 1991, the historical rivals India and Pakistan signed a treaty agreeing not to target each other’s nuclear facilities.  They realized that far more worrisome than their adversary’s nuclear deterrent was the instability produced by challenges to it. Since then, even in the face of high tensions and risky provocations, the two countries have kept the peace. Israel and Iran would do well to consider this precedent. If Iran goes nuclear, Israel and Iran will deter each other, as nuclear powers always have. There has never been a full-scale war between two nuclear-armed states. Once Iran crosses the nuclear threshold, deterrence will apply, even if the Iranian arsenal is relatively small.   No other country in the region will have an incentive to acquire its own nuclear capability, and the current crisis will finally dissipate, leading to a Middle East that is more stable than it is today.

…Policymakers and citizens in the Arab world, Europe, Israel, and the United States should take comfort from the fact that history has shown that where nuclear capabilities emerge, so, too, does stability. When it comes to nuclear weapons, now as ever, more may be better.

I would amend his statement to say that in the current political, strategic environment nuclear balance is desirable.  If there were a nuclear free zone or a demilitarization of the region, then less or no nukes would be the most desirable outcome.  In theory, it is more desirable than Waltz’s perspective.  But given this is unlikely to happen any time soon, if ever, I think his perspective is the wisest one available, and one from which Barack Obama could learn considerably.