Ghost of Iraq Comes Back to Haunt US/UK Syria Plans

The heavy propaganda for an Iraq War waged by the Bush administration and the Blair government in 2002-2003 came back to haunt the Anglo-American alliance on Thursday when the British parliament voted 285 to 272 not to authorize a military strike on Syria. 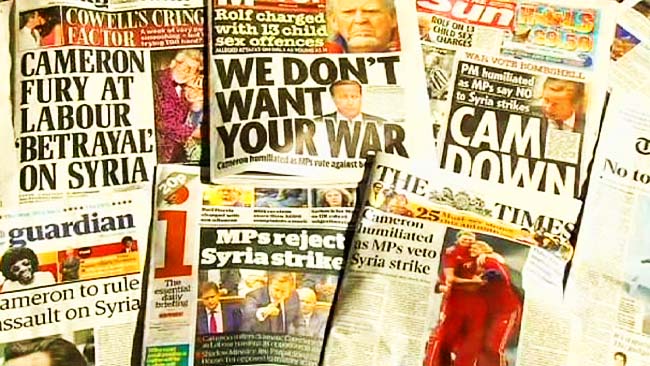 The heavy propaganda for an Iraq War waged by the Bush administration and the Blair government in 2002-2003 came back to haunt the Anglo-American alliance on Thursday when the British parliament voted 285 to 272 not to authorize a military strike on Syria.

While the government of Prime Minister David Cameron could theoretically have proceeded nevertheless, Cameron pledged that he would abide by the will of the British people as expressed through their elected legislature.

In 2002-2003, then PM Tony Blair alleged that Iraq had weapons that could menace Europe and could be deployed in 45 minutes. To this day, I have no idea what he was talking about. The head of MI6 came back from a meeting in Washington and alleged that the intelligence was being fixed around the policy (of seeking a war). There were allegations of a “dodgy dossier,” a government file of bad intel presented to parliament. Bush’s chief of staff Andy Card said of the deceptively quiet August of 2002 that you don’t launch a major new product in August. In September, the Bush administration tried to scare the world into thinking that Saddam Hussein was on the brink of having a nuclear bomb. Breathless allegations were made. Iraq was training al-Qaeda in use of chemical weapons. Iraq had VX poison gas. All lies. It came out that Blair and Bush discussed the possibility of trying to get Saddam to shoot down a UN-flagged aircraft as a provocation justifying military action.

It is the classic story of the boy who cried wolf.

The British members of parliament who debated whether to take action against Syria were obviously haunted by the mistakes of the Iraq War and determined not to repeat them.

The case of Obama and Cameron against the Syrian government has some holes, but it isn’t a bad case. But it involves murky allegations of weapons of mass destruction use by an Arab regime, and a unilateral Anglo-American shock and awe aerial attack. It looks way too much like Iraq, and there is no telling where it might lead. Britain is not very far from Syria and the repercussions of an attack could be significant. Britain also has a significant Muslim minority population that is die hard set against an attack on Syria.

The vote puts President Obama between a rock and a hard place. The formerly solid Anglo-American solidarity has been broken. Obama does not have the Arab League and he does not have the UN Security Council. He does not even have a consensus on the European continent.

Obama should pivot now and choose vigorous diplomacy over a military strike. The latter will now have no legitimacy in international law, and would not be supported even by the British parliament.

The duplicity of Bush and Blair has deeply injured faith in government, even on the part of members of government. Their use of the high-flown rhetoric of protecting helpless populations from tyrants and deflecting dire threats of WMD cheapened those endeavors and trivialized them They bent the sword of state and rendered it useless in any similar situation.