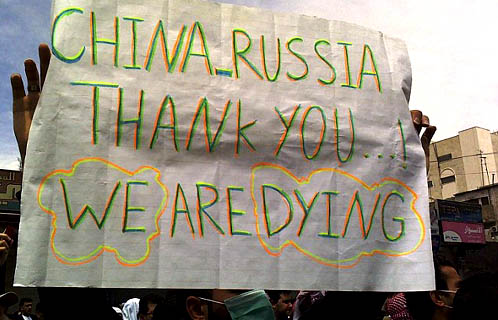 The message is a reference to the failed bid by the UN to condemn the violence in Syria, which was blocked by China and Russia . Source: Reuters

China and Russia would do well to take a leaf out of Turkey’s playbook in trying to recover lost ground with Libyan rebels taking control of their country even though Colonel Moammar Qaddafi remains at large.

Turkey like China and Russia alongside India, Brazil and South Africa initially opposed foreign military intervention in Libya. But unlike the others Turkey reversed its position early on and became a member of the Libya Contact Group that groups NATO and the Arab League.

It is too late for the five United Nations Security Council members to undo the fact that in contrast to Turkey they continue to oppose the military intervention as well as the fact that Mr. Qaddafi’s opponents took up arms against him.

Their position threatens now to haunt them as they brace themselves for the fact that they may not get a significant share of Libya’s post-Qaddafi reconstruction pie. It also confronts them with the need to review their policies so that they are not caught in the cold as the Arab revolt sweeping the Middle East and North Africa threatens the grip on power of other autocrats in the region, first and foremost embattled Syrian president Bashar al Assad.

That need not involve a dramatic U-turn. It would however mean being proactive rather than reactive with the Libyan rebels as well as with Mr. Assad’s opponents. There is nothing to stop representatives of China and Russia from following in the footsteps of Turkish foreign minister Ahmet Davutoglu who this week became the most senior foreign official to visit Benghazi since the rebels entered Tripoli this weekend.

Bearing a gift of $300 million in grants and loans, Mr. Davutuoglu is certain to have ensured that Turkey will rank high on the list of nations to benefit from Libya’s reconstruction. Mr. Davutuoglu told the rebels he wanted Turkey’s state-owned energy group Turkish Petroleum Group (TPAO) to resume oil production and exploration in Libya.

Representatives of China and Russia as well as from India, Brazil and South Africa may not be greeted with the same enthusiasm with which Mr. Davutuoglu was welcomed, but the gesture of following the example of the Turkish official would not be lost on the rebels. That is certain to be all the more the case if Mr. Qaddafi makes good on his threat to wage an insurgency against the rebels as they seek to establish their authority over the country.

That threat could significantly complicate the rebel’s already daunting task of establish law and order, ensuring the revival of basic services, kick starting the economy and leading a transition to democracy. In those circumstances, the rebels will more than ever need all the assistance they can get.

If the rebels and NATO powers look at what went wrong in Iraq to save Libya the fate of a cycle of vicious violence and fracticide, Mr. Qaddafi may well have seen Iraqi leader Saddam Hussein’s campaign of terror as an example to emulate. Like Mr. Hussein, Mr. Qaddafi appears to have escaped from his besieged headquarters through vast underground complex surrendering Tripoli in the hope of being able to wage a prolonged and bloody insurgency.

The window of opportunity for China, Russia and the others to try and limit the damage they suffered by failing to support the rebels is however limited. The rebels, acting on Western advice based on the experience in Iraq, are emphasizing the need to avoid retribution, be inclusive in giving all elements of Libyan society a stake in shaping their country’s future and ensure the operations of medical facilities and communications as well as the supply of electricity, fuel and water. The rebels hope that this will undermine support for Mr. Qaddafi whose potential insurgency would lack the kind of covert support Mr. Hussein enjoyed from neighboring countries.

The Libyan rebels are likely to get the bridge financing they need from Western as well as Arab nations until the billions of dollars in frozen overseas Libyan assets are freed and put at their disposal. Nonetheless, this is for the rebels a moment of immediate need, one that China and Russia and the others could help alleviate. Such a gesture would not erase the past but would go some way in repairing their tarnished images.

Similarly, China and Russia could quietly establish relations with Syrian protesters in a bid to avert a similar situation if and when Mr. Assad is forced to relinquish power. The US and European push for the adoption of UN sanctions against Syria offers China, Russia and the other Security Council members another opportunity to position themselves differently.

To do so, China and Russia would have to define their interests over the middle rather than the short term and defeat widespread conspiracy theories in their capitals that assert that Western nations see the Arab revolt as a spring plank for similar uprisings in their own backyards. That would stand them in good stead in a resource-rich region that stretches from the Atlantic coast of Africa to the Gulf whose short and medium-term future is one that will be marked by popular demand for political and economic change.

James M. Dorsey is a senior fellow at the S. Rajaratnam School of International Studies at Nanyang Technological University in Singapore and the author of the blog, The Turbulent World of Middle East Soccer.