In China Or Israel: ‘Something There Is That Doesn’t Love a Wall’ 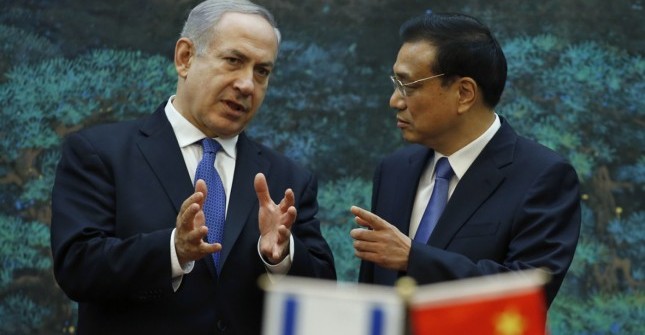 Bibi Netanyahu is visiting China where he’s negotiated trade deals, lobbied unsuccessfully for a tougher Chinese diplomatic stance against Iran, and likely cooked up some secret arms deals with the Chinese military. But one of the oddest of his public appearances was at the Great Wall, where he extolled its supposed virtues and promised to adopt them for Israel:

You know, this Wall served as an inspiration for me. We built the barriers to protect Israel from the south. Ultimately, we’ll have Israel covered with them everywhere.

He was later quoted amplifying on this thought:

“Just as the Chinese defended themselves by barricading themselves behind the Great Wall, so to will we [Israel] fortify ourselves along the southern border, the Golan Heights and all fronts.”

Leaving aside the debate about the utility of Israel’s Separation Wall, let’s look at walls in human history. There is a human impulse to isolate oneself from enemies. If you don’t have to see things that are unpleasant, it makes life so much more comfortable. Hadrian did it. The French did it with the Maginot Line. The Israeli tries tried it with the Bar-Lev Line. And the East Germans tried it in Berlin.

Deb Reich penned a study of various historic walls and found that none, including the Great Wall, ultimately succeeded in their goal of keeping undesirables out of the homeland:

Emperor Meng T’ien (Qin Dynasty) began the Great Wall of China in 221 BCE, with 300,000 workers, to keep out the Huns. Additions were made over the next 1,700 years. All told, it’s around 6,400 km long, up to 50 feet high, 15 to 30 feet wide at the base, and dotted with guard towers. Nowadays, of course, it’s a tourist attraction: Westerners admire it, but for the Chinese it signifies mainly their eventual defeat by the Manchurians.

Roman Emperor Hadrian’s Wall (2nd century CE) was meant to keep the northern neighbors out of Britain, but its location split the tribal lands of the Brigantes, the most powerful Celts…at the time. This little detail insured continuing trouble. A later emperor then built another wall farther north, but the cheeky Celts just rebelled again. These days, Hadrian’s Wall and Antonine’s Wall draw hikers and day-trippers; the Roman empire is long gone.

The Berlin Wall, its remnants now preserved for tourism, was erected in the middle of the night on August 13, 1961, and subsequently beefed up (to keep the East Germans in, and everyone else out). It was higher tech than the Roman stuff – 150 km of barbed wire and concrete, 3.5 meters high. JFK visited divided Berlin in June 1963 and, famously, gave good solidarity (“I am a Berliner”). Imagine what he’d say today if he came to Qalqilya.

Sharon’s Wall, planned at 500 km in length and meantime expanded to nearly 800 km and counting, is much, MUCH higher tech than the Berlin Wall ever was… But of course Sharon’s wall, too, is destined to evolve into a tourist attraction eventually. (Just ask Hadrian or any of those other guys.) Ah, for a working time machine! We could skip this cheerless, macabre interim phase and segue straight to the future theme park…

Netanyahu’s father was a professor of Jewish history. The son seems not to have absorbed any of the lessons of history his father may’ve imparted. Or else his father taught him the wrong lessons. Alternately, Bibi might’ve paid more attention to Robert Frost’s wise and knowing poem:

Before I built a wall I’d ask to know
What I was walling in or walling out,
And to whom I was like to give offence.
Something there is that doesn’t love a wall,
That wants it down.

At any rate, Bibi has lost sight of the fact that walls don’t work. Ultimately, the people or forces you’re trying to keep out have greater will than you and they overwhelm your defenses.

Unless, of course, you come to terms with them before this happens. No chance of that happening. So we’re left with the alternative, which is an Israeli wall that will eventually become a historical curiosity, because it failed in its goal of keeping Israel free of “terrorists” and marauders, those pesky Palestinians.