How the GCC Should Go About ‘Containing’ Iran 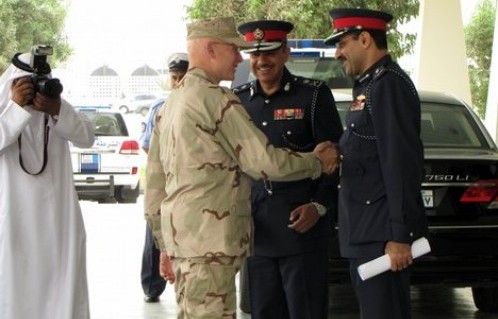 The GCC’s new Secretary-General, Abdul Lateef Al Zayani, takes office during one of the most turbulent periods in the recent history of its six-member bloc. Al Zayani is the council’s first secretary who comes from the military establishment. Statements from sources close to the body have emphasised the importance of strengthening the GCC’s military progress. For the foreseeable future, regional security and internal stability are the GCC’s priority.

Like the Americans and the Soviets in the second half of the last century, the GCC and Iran are locked in a geographically smaller yet equally polarised, cold war; and Bahrain has, unfortunately, become this war’s Berlin.

As I’ve outlined in a previous article, the GCC Peninsula Shield’s (GCCPS) entry into Bahrain was a move the Iranians did not expect, at least not that fast. And it certainly was a strategic outmanoeuvre about which they could only protest. The Iranians are used to being in the opposing position. They have been the ones who have built a strong alliance with Syria, Hezbollah and Hamas under the pretext of supporting resistance to the Israeli occupation.

Seeking Chinese, Russian, Turkish and Brazilian support, they have continued to develop their nuclear programme under limited observation from the IAEA. They have built a delicate alliance with southern Iraq’s Shiites and their re-emerging clergy. They have, covertly, supported the Al Houthi rebels in north Yemen — a thorn in Saudi’s south. Geopolitically and socio-culturally speaking, the Iranians have been the net gainers over the past three decades.

GCCPS moved into Bahrain as a reaction to the anxieties over the back-to-back loss of Hosni Mubarak and Sa’ad Hariri, two GCC allies, making opposition calls for the fall of Bahrain’s monarchy a red line. But the question now is what is the Gulf’s next move?

Like the Americans, the GCC must develop a containment policy towards Iran. However, for the policy to be effective it would have to recognise a fundamental issue: the driver for Iran’s regional policy isn’t sectarian at all but rather ethnic.

Considering the complex history of Persian-Arab relations, the sectarian identity is a recent phenomenon. The Iranians view themselves as a distinguished civilisation that was recognised as an equal by the likes of the Greeks and the Romans who, under the pretext of Islam, came to be ruled by Arabs of the desert. It is from this perspective that the GCC must recognise what drives the Iranian psyche. Ten years ago, a World Values Survey ranked Iranians at first place when it came to nationalism; 92 percent claimed they were very proud of their nationality, 72 per cent and 50 per cent of Americans and Britons surveyed, respectively, felt that way.

In other words, the GCC (which turns 30 next month) isn’t at war with a 32-year-old republic, but a civilisation that’s more than 2,500 years old. And so, while the Americans were attempting to contain an ideology eventually leading for it to implode, the GCC should attempt to redefine the geopolitical landscape of Iranian sphere of influence forcing it to recognise new realities of coexistence.

To put it bluntly, Islamic or not, the Iranians need to be forced to play nice. The Gulf states must recognise that Iran must be contained with intermissions of detentes and rollbacks to its spaces of influence as required.

So when it came to Syria, following its $15 billion (Dh55 billion) FDI plan in 2007, the Gulf’s sovereign wealth funds could’ve invested their way into a new Syrian foreign policy. This would’ve been especially likely since Syria’s main reason to gravitate towards Iran was the latter’s war with its ideological arch rival, Iraq. A new Syrian foreign policy could’ve forced Hezbollah to act in national interest and assimilate its militia into the Lebanese national army and its leadership into a political party. It could’ve also helped limit terrorist attacks in Iraq from their borders and even pressured Hamas to uphold its reconciliation with Fatah.

When it comes to Bahrain, the situation is becoming complex. While the official rhetoric is committed to establishing stability and a return to normality, there is an emerging undertone of sectarianism, questioning national loyalty that is also spreading to other Gulf countries. This is exactly the kind of atmosphere that the Iranians can turn into a self-fulfilling prophecy. Exercising self-restraining realpolitik, the Gulf must avoid alienating citizens but rather improve relations with them and address their socio-economic grievances. Should there be proof of espionage then those cases can be used to emphasise individual treasons, which do not represent the rest of the community. Such policies would reinforce the national fabric and weaken Iran’s argument for regional Shiite custodianship.

Iran plays an important role in the region and should be recognised for it. However, the GCC should work actively to clearly define, limit and counter this role by its own. A multi-polar world is taking shape, our region is no exception and more then ever, the world is run by those who show up.