How are the Saudis Reacting to the Regional Turmoil? 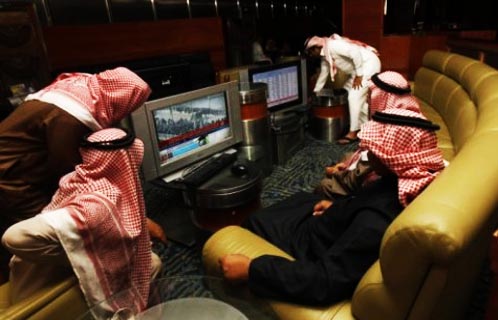 With what’s going on right now in Yemen, Jordan, Syria, Tunis and Egypt, I get a lot of questions about how Saudis are taking it and what’s the reaction. The short answer is they are shocked and captivated but haven’t made up their minds about any of it.

The long answer is Saudi Arabia is a country where 40% of the population is under 14 years old, unemployment is rampant and the conservative religious approach is the key to the majority. These three ingredients are a dangerous mixture. Add to these the widespread availability of  social media tools and you have a bomb waiting for detonation. So why has nothing happened?

We have been faced with defeat over the last three generations. First it was the Ottomans and I can’t tell you the countless times I’ve heard stories about how my great-grandparents generation faced off with the Turks in Qaseem. There are even walls still standing with bullet holes from that time. Then my grandparents’ generation faced the creation of Israel. Every family knows a Palestinian refugee or had someone in their family killed or injured, my own grandfather was maimed in 1948 when Israeli forces bombed the hospital he was being treated at. Then my parents’ generation witnessed the fall of Jamal AbdulNaser’s high hopes and grand plans.

After that every country in the region had its own version of dictatorship and ‘people suppression’ evolved so that in the end you had different countries with different names but all sharing the same tactics and the same system. People have lost hope of being represented politically and have adapted and figured out other ways to move forward in life.

This is the context and the lenses through which our young people are watching what’s going on in the region. And this is why the fact that there was an uprising is not as important as the aftermath of that uprising.

They are watching, though. All over the country, all those Saudis who rarely watch or read the news  are now carefully observing what’s going on in neighboring countries. Saudis who didn’t know what the channel number for AlJazeera News was on their receivers now have it saved on their favorites list. University and high school students are now watching the news and social media feeds in their study breaks instead of a rerun of Friends. It’s a new atmosphere. The thing lacking is analysis or a discussion on what it means for us.

The only tangible effect is more outspokenness in their criticism of how the Saudi government was ill-prepared for the Jeddah floods. In just three days from the first Friday after the floods to last Sunday, there were one hundred and ten opinion pieces in Saudi newspapers condemning what happened and criticizing how the government handled things. Also Shiekh Salman Al Ouda broadcast an unprecedented episode of his MBC show where he spoke about how the government must listen to Saudi’s demands for more transparency and spoke highly of the movements in Tunis and Egypt. And then Ali Al Olayani, a popular TV presenter also dedicated a frank and brave show where YouTube videos uploaded by citizens in Jeddah were shown. And the most recent were reports of protesters in Jeddah and some being arrested and there was even a video that was taken down a day later of the protest where you can see men and women marching down a Jeddah street.

We are only at the beginning and the only thing that has been determined is that Arabs are fed up, and that we won’t back down.