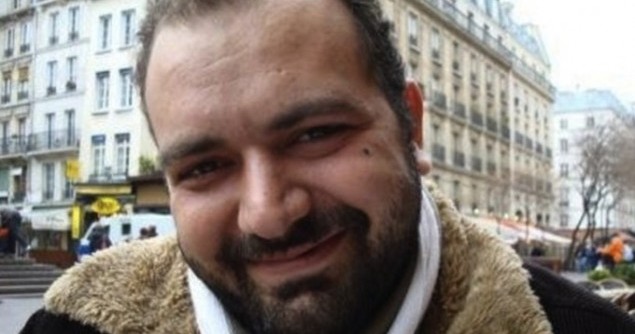 International film stars and the Directors Guild of America have voiced concern and are demanding the release of Syria filmmaker Orwa Nyrabia who has been missing since August 23.

Robert de Niro, Jeremy Irons, Kevin Spacey, Charlotte Rampling and Danny Boyle, among others, are urging the Syrian regime of President Bashar al-Assad to release Nyrabia. But apart from Lebanese documentary filmmaker Mahmoud Kaabour, Arab figures in the industry are keeping mum. But please correct me if I am wrong.

Kaabour, the documentary filmmaker behind Grandma, a Thousand Times and Being Osama, issued a video and has been active on social media platforms raising awareness and calling for Nyrabia’s release.

“The Directors Guild of America joins together with the international film community in expressing our serious concern over the disappearance of filmmaker Orwa Nyrabia two weeks ago.

“A society or government that fails to protect an artist’s freedom to express his or her creative vision without fear of censorship, retribution or government reprisal is surely one in which respect for liberty, civil and human rights is similarly tenuous. We call for Nyrabia’s immediate and safe release along with any other filmmakers and other artists who have been detained and prohibited from full freedom of expression.”

Some 51 directors, producers, writers and actors from other parts of the world have also signed a letter demanding Nyrabia’s release. It says:

“We, the undersigned members of the UK film community and international friends, implore the Syrian authorities to release Orwa Nyrabia immediately.

“Orwa is a highly respected producer and festival promoter in Damascus who has been pivotal in starting a documentary renaissance in the Arab world.”

Among signatories to the letter are David Puttnam, Mike Leigh, Ken Loach and Colin Firth. Copies of the letter were forwarded to UK Foreign Secretary William Hague and distributed in France and the U.S.

Nyrabia’s last known movements are going to Damascus International Airport to fly to Cairo. He did not board the plane and has been missing since.

Nyrabiya is a graduate of the prestigious High Institute for Dramatic Arts in Damascus, where he studied acting and starred in several films before moving to film production.

In 2002, along with a Syrian fellow filmmaker and his wife, Diana el-Jeiroudi, he established Proaction Films, a Damascus-based production and distribution company that focuses on human rights, gender and social justice topics.

He is also the co-founder, with Diana el-Jeiroudi, and program director of Dox Box International Documentary Film Festival and editor–in-chief of Tafaseel, the newly launched documentary film quarterly in Arabic and English.

Founded in 2007, Dox Box has hosted documentary filmmakers such as Kim Longinotto, D. A. Pennebaker and Marc Issacs in Damascus. In March of 2012, Dox Box Global Day saw screenings of Syrian documentaries in Edinburgh and London in partnership with Reel Festivals and internationally in solidarity with the Syrian uprising.

In July, the Sarajevo Film Festival honored Nyrabia and Jeiroudi with the Katrin Cartlidge Foundation scholarship for “independence, singularity and integrity of spirit.”

In March, they were presented with the European Documentary Network (EDN) Award for initiating and running the documentary festival.

Diana el-Jeiroudi issued the following statement on his disappearance: “Syrian film producer Orwa Nyrabia disappeared on his way heading to Cairo at 5:00 p.m., on August 23, 2012. I lost contact with him soon after his arrival at Damascus International Airport. According to Egyptian Airlines, he did not board the plane, which indicates that he was arrested by the Syrian authorities at the airport.”

Nyrabia’s arrest is part of a crackdown by Assad’s regime on pro-democracy artists and intellectuals. “It seems it is a crime to establish an independent cinema movement in Syria,” a fellow Syrian filmmaker, Ahmad Malus, said in a video statement recorded outside Syria, Reuters news agency reported.

Just before publishing this post, I learned Syrian filmmaker Tamer al-Awam, 34, was killed by regime forces in the northern city of Aleppo on Saturday (September 8).

The opposition Syrian National Council (SNC) said: “Syria lost one of its dear sons. Director and journalist Tamer al-Awam was martyred by the bullets of the murderous and treacherous regime on the front line of Aleppo.”

Awan was shooting a film for the Free Syrian Army (FSA).

“The Syrian regime is targeting now all groups of Syrian society without exception: workers, intellectuals, filmmakers,” said the theater director, who asked to be identified only by his first name, Jameel, citing fear of reprisals. “The regime is becoming worse as it feels more surrounded.”

My thoughts and solidarity are with Diana el-Jeirdoui and Orwa Nyrabia’s family and friends as well as with all those detained in Syrian jails.

To find out more, you can join the Facebook group set up by Nyrabia’s supporters: Freedom for Syrian Cinema, Freedom for Orwa Nyrabia.