‘Gender Parity’: Major Strides Being Made in Algeria 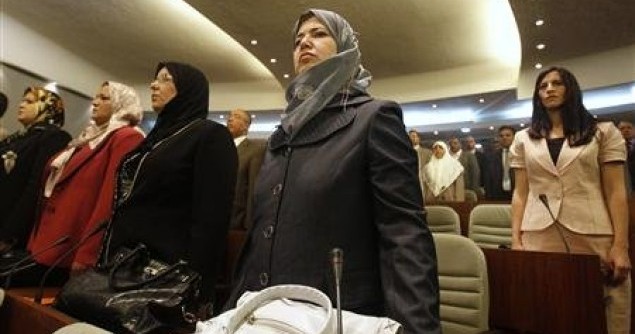 Women’s rights activists will forever remember the 10 May 2012 Algerian legislative elections as a turning point. That day, 147 women, out of 462 candidates, were elected to the National People’s Congress (NPC) – a positive step towards achieving gender equality. In 2007, in contrast, female members of parliament (MPs) won only 8 per cent of the total seats.

Why was there such a leap forward? It was partly due to Law 31, which was added to the constitution in November 2008. It required women to comprise 20 per cent of political parties’ candidate lists – and would penalise parties by removing them from the ballot if they fail to comply.

Yet even though politically active women are optimistic in light of these developments, some activists remain sceptical. Algerian lawyer Fatma-Zohra Benbraham criticised the new law on women’s representation as a “legislative trap”, given “that the legislation referred to the representation of women on the candidate lists and not within the NPC [itself],” as she told the Algerian newspaper Le Temps D’Algerie.

Concurring with Benbraham, Yasmina Taya, President of the Algerian National Association of Women Entrepreneurs, noted that Algerian women are still marginalised in spite of all the key government positions they now hold.

But it is still worth noting that women’s extraordinary ascent to the NPC occurred in a country that did little to encourage women to participate in politics just a few years ago.

Women’s organisations’ growing visibility and efforts have, over time, contributed to growing support for the idea that Algerian women should play a more public role in their society.

One example of such an organisation is Amusnaw, which advocates on a daily basis for equality between men and women. This year, it began a project to develop a marriage contract that would help women set up conditions for their marriage before their weddings, such as the right to work or continue their studies. The organisation is now trying to get the state to use it as a standard marriage contract.

These 147 female candidates are now in elected positions because of women’s rights groups’ efforts, and these candidates are indebted to such groups. The female MPs should therefore support bills that promote Algerian women’s political, economic and social development. Their agenda should focus on combatting violence against women, improving their access to high-level positions, and ensuring gender equality, especially through revising the family law. These steps will ensure that Algerian women’s needs are dealt with effectively.

Today, many key players from organisations that defend women’s rights are supporting these newly elected deputies. For instance, Nassera Merah, a sociologist and feminist activist, designed a training programme for women in politics, including local and national government officials, activists and organisational leaders. The programme’s objective is to give female politicians the necessary tools to support a party’s agenda or propose new laws in the assembly. Female civil society activists should continue to make their expertise available to the new members of parliament so that these new MPs can take advantage of it.

Men also have a role to play in improving women’s representation in the public sphere. According to Nadjia Zeghouda, a trade unionist and human rights activist, this “feminisation” of the NPC will hopefully push men to evaluate their positions on women’s issues. Indeed, men working alongside so many female MPs could improve the way that men view women’s issues, and help them take laws pertaining to women more seriously.

Hopefully, these elected women will present other women’s concerns in a way that is original and relevant – and get their male colleagues to notice those concerns.

Ultimately, it is impossible to talk about movements supporting democracy and human rights without including women in these conversations. Any successful movement towards these goals requires women’s participation.

The beginning of gender parity in Algeria’s NPC is a positive step, heralding a real shift towards democracy and progress – for all Algerians, male and female.

N.Hafid is a human rights activist in Algeria