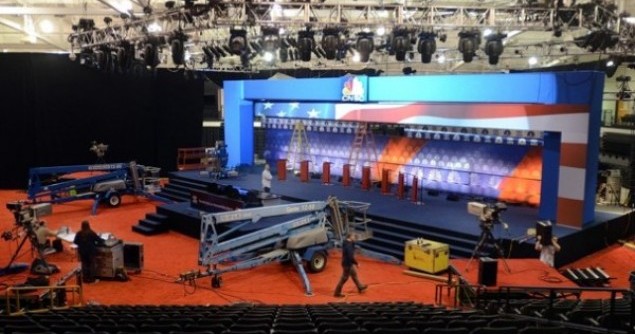 Events in the Middle East continue to fester and flair with yet more deaths in Syria, rumors of the Kurds carving out an enclave for themselves in the ruins of Assad’s state, Kenyan troops cleansing the Al Shabab from their last stronghold in Somalia, cross firings between leaders of Iran, Israel and the Palestinian Authority at the anything but united UN, and the list goes on and on. But in America, now that the official NFL refs are back on the job, the media is gearing up for the first presidential debate between a sitting President that was once thought to be in electoral trouble and a Republican candidate who has been so inept that he may re-enact a Goldwater moment for the party of Lincoln (and now of Lincolns, Lexus and Jaguars).

I suspect quite a few voters will watch the debate, even those who have already made up their minds and voted early, and others will watch just to confirm how much they dislike one of the candidates. But for all the hoopla, these debates are so choreographed that winners and losers tend to be determined only in the eyes of the beholders. Romney could stick his foot, ankle, calf and knee in his mouth and Fox News will still declare him the winner. The MSNBC anchors will try to stifle their laughter, but they actually knew who would win before the show opened. And a show it will be. Think of it as the MLB home-run hitting context with the BP fastballs lain in there, right down the pike, not as a boxing match where someone might get bloodied and knocked out. Consider this: George W. Bush survived his debates and won re-election. Does anyone seriously think that Obama will forget who the leader of China is?

There are a number of questions that I suspect will not be asked, even though quite a few Americans may be mulling over them before they make a “legitimate” vote (I suppose in Todd Aiken’s view this would be a vote in which the voter has a built-in ability to reject liberals and shows an I.D. issued by the NRA). How about these?

• Governor Romney, if you are elected President and Jesus Christ comes back to earth before you take the oath of office, will you be disappointed? Will you urge the Republicans in Congress not to filibuster any of the programs for the poor that Jesus might want to introduce?

• President Obama, why won’t you admit your are a Muslim born in Kenya? If Governor Romney is elected President, will you agree to self deport yourself back to Africa and stop passing yourself off as a white guy?

• Governor Romney, given the rising costs of health care for the elderly, who are often given medical tests they really do not need, would you as president give a tax break to faith healers as an alternative to the E.R.?

• Governor Romney, if last time around the VP candidate Sarah Palin was a pit bull, do you think that Paul Ryan is a poodle or a Doberman? Has the campaign committee put him through a dog training school yet?

• President Obama, is there a room in the basement of the White House where Joe Biden can be sent and the key thrown away?

• Governor Romney, do you actually shop at Staples?

• President Obama, if you are not re-elected President, would you be willing to work at Staples for a minimum wage or would you prefer to take your chances in the NBA draft?

I have one more suggestion. Since there are three debates, could we remake “Survivor” and vote one of them (or both of them) off the stage at the end of the third debate?