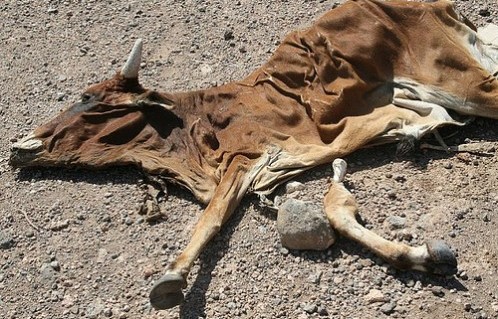 “When you are hungry, cold is a killer, and the people here are starving and helpless.” Not many of us can relate to such a statement, but millions of ‘starving and helpless’ people throughout the Horn of Africa know fully the pain of elderly Somali mother, Batula Moalim.

Moalim, quoted by the British Telegraph, was not posing as spokesperson to the estimated 11 million people (per United Nations figures) who are currently in dire need of food. About 440,000 of those affected by the world’s “worst humanitarian disaster” dwell in a state of complete despair in Dadaab, a complex of three camps in Kenya. Imagine the fate of those not lucky enough to reach these camps, people who remain chronically lacking in resources, and, in the case of Somalia, trapped in a civil war.

All that Batula Moalim was pleading for was “plastic sheeting for shelter, as well as for food and medicine.”  It is disheartening, to say the least, when such disasters don’t represent an opportunity for political, military or other strategic gains, subsequently, enthusiasm to ‘intervene’ peters out so quickly.

UN officials from the World Food Programme (WFP) are not asking for much: $500 million to stave off the effects of what is believed to be the worst drought to hit the Horn of Africa in 60 years. This is not an impossible feat, especially when one considers the geographic extent of the drought and creeping famine. Ethiopia, Somalia, Djibouti, Kenya are all affected, and terribly so. Sudan and Eretria are also not far from the center of this encroaching disaster.

60 percent of the amount requested by WFP has already been raised. More is needed, however, especially as the reverberation of the drought is already surpassing the immediate need for food and shelter. Five million are already at risk of cholera in Ethiopia alone, according to the World Health Organization (WHO). Hundreds have reportedly died, and many more are likely to follow.

Cholera requires an immediate remedy as the intestinal infection leads to sever diarrhea, dehydration and death. Other figures are equally grim. 8.8 million people, also in Ethiopia, are at risk of contracting malaria, according to Tarik Jasarevic, WHO spokesman.  Jasarevic has also told journalists that these ailments have already been reported in Somalia, and other Ethiopian regions. This means the disaster is not confined to refugee camps and is thus much harder to control.

For refugees, there is nothing worse than having no safe haven in sight. Still, they must escape when death becomes the only alternative to aimless journeys. While hundreds of thousands are gathering in Kenya’s camps, an average of 1,700 Somalirefugees venture to Ethiopia each day. The latter, a country with a population of about 85 million, is fully embroiled in the crisis. 4.5 million Ethiopians need assistance, a rise of over 50 percent in less than three months, according to WHO.

One can only try to envisage the speed at which this disaster is unraveling. International organizations, including WFP, WHO and UNICEF have made numerous appeals. Some major media outlets responded by giving the humanitarian crisis a degree of coverage. While donations have bashfully trickled in, the goals are yet to be reached. According to a report by the Telegraph, “no African country has offered a donation to help drought victims in the Horn of Africa outside of those affected.”

The report, published July 15, quoted Michael O’Brien-Onyeka, Oxfam’s Regional Campaigns Policy Manager for East and Central Africa, who said it was “disappointing” that “African states insist on ‘African solutions for African problems’ with regard to Libya but fail to respond to droughts and famines.”

On the subject of Libya, it may be helpful to consider some financial figures.  “The British Government has pledged £38 million in food aid to Ethiopia,” reported the Telegraph. The following day, British Daily Mirror reported on the seemingly different subject of Libya. Four more British jets were recently deployed to the war zone near Libya, raising the total to 22 RAF jets, according to James Lyons in the Mirror (July 16). The cost thus far is £260 million, only £40 million short of the total amount needed by the WFP to feed 11 million starving people.

Here is another example of the dubious nature of British involvement in the war on Libya (falsely slated as a war to prevent imminent massacres of civilians): “Tornado GR4s cost around £35,000 for every hour they are in the air and are having to fly long distances from their base in Gioia del Colle, southern Italy, to Libya,” according to the Mirror.

Major African countries and Britain are not the only parties involved in acts of duplicity. The US military adventurism in the Horn of African, especially Somalia, and its renewed use of costly unmanned drones can feed, cloth, shelter and treat countless refugees. More, Arab and Muslim countries tend to be the least responsive parties in such situations. While it is true that the chief of the Organization of Islamic Cooperation (OIC), Ekmeleddin Ihsanoglu made several appeals for help, such singular calls generate feel-good moments but no major mobilization for action.

The disaster in the Horn of Africa is partly man-made. Countries with ‘failed states’ status (in other words, victims of outside interventions) cannot possibly fend off crises of this magnitude. For the last 20 years, Somalia has had no central government controlling the country’s territories. Outside intervention has made it impossible for any party to unite the disjointed country. What is a Somali refugee to do?

To help the millions disaffected by the multilayered disaster in the Horn of Africa, we need more than appeals for blankets and food stuff.  We also need a degree of human decency and common sense. We need to re-channel some of the funds wasted on disastrous wars into actually saving lives. If warning parties would ground their Tornado GR4s and other warplanes for a few days, the single action alone could save the entire region.

For now, though, let us all do what we can to help the Horn of Africa survive this terrible ordeal.