For the love of Egypt: Why Besieged Gazans Danced in the Street 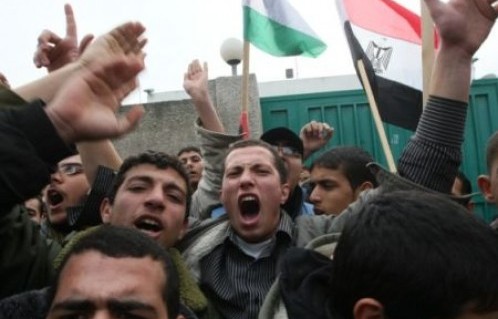 A dear friend of mine from Gaza told me that he hadn’t slept for days. “I am so worried about Egypt, I have only been feeding on cigarettes and coffee.” My friend and I talked for hours that day in early February. We talked about Tahrir Square, about the courage of ordinary Egyptians and about Hosni Mubarak’s many attempts to co-opt the people’s revolution. We were so consumed by the turmoil in Egypt that neither of us even mentioned Gaza.

The siege on Gaza – and on the whole of Palestine – is a constant factor that unites most Palestinians. However, the genuine solidarity that the people of the Gaza Strip felt when Egyptians took to the streets on January 25 surpassed even the political urgency around the humanitarian crisis in Gaza. Ordinary Gazans danced the night away when Mubarak was removed from power on February 18. Although lifting the siege is a Palestinian priority, those who raised Egyptian flags, shed tears and subsisted on coffee and cigarettes for nearly three weeks were hardly making the connection between the siege and Mubarak. While Mubarak was loathed to the core – his decision to block the Rafah border at a critical time victimized thousands – the bond that united Egypt to Palestine runs much deeper than the sins of a senile dictator, or even a terrible siege.

The story, in fact, starts well before 1948, the year of the Palestinian Nakba. Egypt and Palestine have for long reflected the state of the other: in defeat and triumph, in despair and hope. The valiant youth of Egypt are now the harbingers of hope for their country, for Palestine and for the entire region, although things haven’t always been so promising.

Al-Nakba represented heartbreak to the collective conscious of Arabs, but Palestinians and Egyptians were affected the most.

In 1948, Arab armies entered into a halfhearted battle in Palestine. They were under-equipped, with only a limited mandate provided by self-serving leaderships.

Most Palestinian villages were already depopulated by Zionist militias. The local resistance was mercilessly smashed, and the roads out of Palestine were filled with weary refugees. The Arabs were defeated. Ordinary Egyptians fumed as their Palestinian brethren were humiliated and Palestine was lost.

The defeat in 1948 led to serious introspection in Egyptian society. The internal crises, the poverty and the lack of social justice could no longer be ignored.

Following the defeat of the Egyptian army in the south of Palestine, Egypt quickly descended into turmoil, and was on the verge of revolution. There was little in the way of funds to be channeled to Gaza’s sizeable refugee population. Much of Egypt’s wealth was squandered by King Farouk on his own family. Indeed, the misery in Gaza was an extension of the suffering in Egypt, and in some strange way, the failed

Egyptian military intervention in southern Palestine had much to do with the revolution that followed in Egypt in 1952.

Gamal Abdel-Nasser, who toppled the monarchy and became Egypt’s president, was an officer in the Egyptian army in 1948. He crossed into Gaza from Sinai by train in order to defend Palestine. He was stationed in Fallujah, a village located to the north of Gaza. His unit repeatedly tried to recapture some of the lost areas in the south, even when military wisdom pointed to the unfeasibility of such an effort.

When it was discovered that many Egyptian army units were being supplied with purposely-flawed weapons, shockwaves spread throughout the army, but it was not enough to demoralize Nasser and a few Egyptian soldiers. They stayed in the Fallujah pocket for weeks, and their resistance became the stuff of legend.

The building in which Nasser and his unit stayed still stands in today’s Israel. It is surrounded by fences, like a surrealistic piece of living art. Nasser returned to Egypt after a territorial swap – Fallujah for the small town of Beit Hanoun, north of Gaza, which was under Israeli control at the time. Bitterness, anger and grief accompanied him on his way back to Cairo, also through Gaza.

Nasser marched to Cairo, and in 1952, along with a few army officers, he overthrew the king and his government. Palestine was cited by Nasser as a key reason behind his rebellion. The defeat of Palestine had signified all the ills that afflicted Egypt under the King and his royal family.

Palestinians, especially those in Gaza, saw in Nasser a hero and liberator. And why wouldn’t they? He was the man they waved to as he passed by Gaza with his fellow officers following the Fallujah battle. It was a rare moment of pride and hope when the officers crossed with their weapons, and huge crowds of refugees flooded the streets to greet them. The refugees adored Nasser and they placed framed photographs of him in their tents and mud houses.

This is merely one episode to demonstrate the intrinsic, almost organic relationship between Egypt and Palestine. The relationship withstood many difficult events that followed, including the defeat of 1967 (where the rest of historic Palestine was lost), the death of Nasser, and the signing of the Camp David agreement between Egypt and Israel. Saddat was an anomaly, Palestinians argued. Camp David was the exception, they said. Mubarak was not Egypt. Indeed, the siege was seen as dishonoring a legacy that Palestinians are determined to remember with fondness.

Egypt stands for shared history, for heroism and sacrifice.

On March 24, the Middle East Monitor reported that Egyptian Foreign Minister, Dr Nab El Arabi had sent a message to his counterpart in Gaza a few days earlier. In the letter he stated that lifting the Israeli-imposed siege of Gaza – supported by the discredited Mubarak regime – was a priority for the new government in Cairo: “We are acting to open the border at Rafah and facilitate an easing of life for the Palestinians in the Gaza Strip.”

El Arabi’s position is consistent with the wishes of the Egyptian people, a position that was necessitated by the historic solidarity between both nations. It is for similar reasons that Palestinians didn’t get much sleep for 18 days, a period of waiting that culminated in a rare moment of joy when Egyptians won their freedom. In that moment, Gaza was Cairo, Egypt was Palestine, and both peoples were one.