Football ‘Ultras’ At The Heart of Egypt’s Latest Unrest 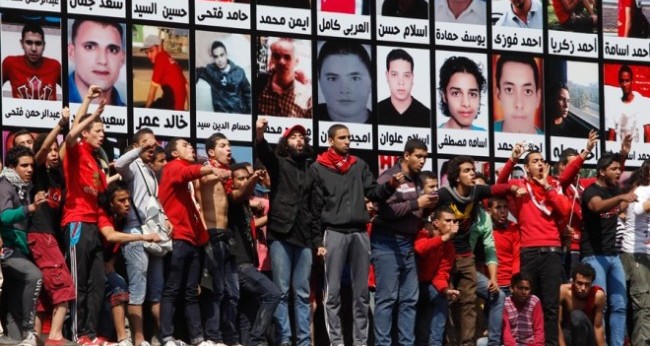 Militant Egyptian soccer fans, a key player in Egypt’s almost three year-old political rollercoaster, are fighting a battle for their existence in the shadow of the military’s campaign to repress the Muslim Brotherhood. At the core of the battle is the military’s desire to crack down on one of the country’s largest civic groups and assert control of stadia in advance of a resumption later this month of the country’s suspended premier league.

In a statement echoing declarations on the eve of the mass anti-government protests in 2011 that toppled President Hosni Mubarak, the Ultras White Knights (UWK) — the militant, highly politicized, well organized and street battle hardened supporters of storied Cairo soccer club Al Zamalek SC — stressed that it was not a political organization irrespective of the political leanings of its members. In 2011, UWK alongside its arch rival, Ultras Ahlawy, the fan group of Zamalek competitor Al Ahli SC, stressed its non-political nature but said its members were welcome to participate in the anti-Mubarak protests.

UWK’s latest statement on Facebook came as many of its members joined opponents of the armed forces and the military-backed civilian government installed after the July 3 coup against Egypt’s first democratically elected president, Mohammed Morsi, to march on Tahrir Square where Egyptians where celebrating the 40th anniversary of the 1973 war against Israel. That war restored Egyptian military pride following the routing of Egyptian, Syrian and Jordanian forces and Israeli occupation of the Sinai, the Golan Heights, the West Bank and the Gaza Strip in 1967 and laid the basis for the Egyptian and Jordanian peace treaties with the Jewish state.

Security forces used tear gas on Sunday to prevent the ultras and anti-government demonstrators from reaching Tahrir. The Egyptian health ministry said at least 28 people were killed and 83 wounded. Some 200 alleged Muslim Brothers  were arrested.

UWK said it represented “the entire Egyptian people, with some members who are supportive of the revolution and others who are against it. The membership of many of our members in the Islamist current does not trouble us …. We are not an organization with a specific ideology.”

The association of many UWK members with the Islamist movement indicates the degree to which the club’s fan base has evolved from the first half of the last century when Zamalek was closely aligned with the former British colonial authority, the monarchy that was overthrown in 1952 by Gamal Abdel Nasser, and Egypt’s upper classes. Its rivalry with Al Ahli is rooted in the fact that Ahli was founded in 1907 as the club of the nationalists and republicans.

UWK leaders said they had issued the statement to counter efforts to undermine their credibility by identifying them as a group with Mr. Morsi and his Muslim Brotherhood. Their statement came amid a campaign in pro-military and pro-government media asserting that the ultras, who pride themselves on their financial independence, were financially beholden to political interests. The UWK like other Egyptian ultras as well as their counterparts in other parts of the world position themselves as not political despite their ant-authoritarian bent and hostility to law enforcement in a bid to reduce their vulnerability.

The UWK insisted that its focus was support for its club. Their militant support led to years of confrontation with security forces in the stadia during the Mubarak era in what amounted to a battle for control of the pitch in a country that sought to control all pubic space. The UWK and other ultra groups constituted the only group that challenged the government’s right to control public spaces. They did so in the belief that as the only true supporters of the club – they see players as hired guns and managers as corrupt pawns of the regime – they were the real owners of the stadia. “We were confronted by repressive regimes just because we dreamt about living,” UWK said. It said its “battle for survival… (was) our motivation for chanting for freedom.”

The group charged that the military and the government were cloaking themselves in the mantle of the 2011 revolution to justify another round of repression. The military has arrested some 2,000 Muslim Brother, including much of the Muslim Brotherhood’s leadership among whom Mr. Morsi, who faces multiple charges and closed down pro-Brotherhood media. At least 1,000 people have been killed since early July in the military’s suppression of the group.

The UWK said it was not intimidated by last month’s death of 18-year-old UWK member Amr Hussein who was killed by security forces when the group tried to storm the Zamalek club’s headquarters in support of its demand that club president Mahmoud Abbas resign. “Bloodshed will not deter us,” the UWK said. The group vowed earlier to avenge Mr. Hussein’s death. The ultras’ influence is visible the music and chants the pro-Morsi protesters have adopted in recent weeks.

“Nothing has changed, we’re still the terrorists we were before the revolution…we are still demanding what is right and fighting for it, laying down our own lives to fight some ignorant people, for whom suppression is a way of life and whose imagination is sick. Amr Hussein, we restore your rights or die like you,” the group said, in a reference to the Mubarak regime’s attempt to criminalize them.

Implicitly the UWK was also referring to the death of 74 Ultras Ahlawy members in a politically loaded brawl in Port Said in February 2012. The brawl was widely seen as an attempt by the security forces and the military which at the time was in government to teach the ultras a lesson not only because of their key role in the toppling of Mr. Mubarak but also their subsequent opposition to the military.

“It doesn’t matter how hard they hit us. We have been steeled in resisting repression and abuse. We have demonstrated our resolve,” a UWK member said.