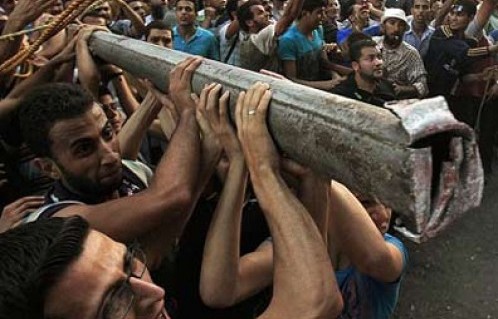 The Egyptian Football Association (EFA) has penalized crowned Cairo soccer club Al Ahly SC in a bid to prevent renewed violence from erupting during the team’s match next week against Premier League club ENPPI. The EFA ordered Al Ahly to play its next match away from its home grounds and to pay for damages caused to Cairo stadium last week as a result of  clashes between Ultras Ahlawy, the club’s militant, violence-prone, highly politicized soccer fans, and security forces that left 130 people, including 45 policemen, wounded.

Ultras Ahlawy and Ultras White Knights, the militant supporters of Al Ahly’s arch rival, Al Zamalek, joined forces days later in mass anti-government demonstrations on Friday and Saturday in which protesters stormed the Israeli embassy in Cairo, forcing its diplomatic staff to be evacuated from the country.

“Ahly must fund repairs of all damage caused to the Cairo stadium stands,” EFA competition committee president Amer Hussien said in a statement on the EFA’s website.

The measures followed a vow by Egypt’s military rulers to prosecute to the full extent of the law the protesters, many of whom were militant soccer fans, who stormed the Israeli embassy.  Ultras Ahlawy denied earlier this week any involvement in the attack on the Israel embassy as well as the targeting by protesters of the Saudi Arabian embassy, the interior ministry and a police station despite a plethora of pictures and witness statements showing the participation of soccer fans in the protests.

The denial, much like the position that the militant soccer fans took on the eve of mass anti-government demonstrations early this year that forced President Hosni  Mubarak to resign after 30 years in office, appeared designed to distance the organization from any political activity while at the same time encouraging members to play an active role in the demonstrations.

Both Ultras Ahlawy and Ultras White Knights issued statements on January 24 of this year, the day before the first of 18 days of protests and clashes with pro-Mubarak forces that ousted the president that they as organizations were not involved but that their members were free to participate. The ultras played a key role in the clashes that ultimately defeated Mr. Mubarak and brought the military to power with a pledge to lead the country to elections within six months.

This weekend’s protests and the attack on the Israeli embassy reflected mounting frustration with the fact that the military has since delayed the election date although few believe that it wants to retain power, been slow in holding accountable police officers and Mubarak loyalists responsible for the deaths of hundreds during the protests that led to the toppling of the president, cracked down on the right to criticize the armed forces and charged thousands of protesters and activists in military courts.

Many Egyptians have also taken the military to task for failing to respond forcefully to the killing last month of three Egyptian soldiers by Israeli forces chasing Palestinian militants near the border with Egypt. Egypt alongside Jordan is the only Arab nation to have concluded a peace treaty with Israel and to have established diplomatic relations.

Tuesday’s clash erupted after the militants shouted slogans against Mr. Mubarak and his imprisoned interior minister, Habib el-Adli. Both men are on trial for allegedly being responsible for deaths of protesters during anti-government protests early this year.

James M. Dorsey is a senior fellow at Nanyang Technological University’s S. Rajaratnam School of International Studies in Singapore and the author of the blog, The Turbulent World of Middle East Soccer<http://mideastsoccer.blogspot.com>.

One Response to Football Supporters Behind Attack on Israeli Embassy