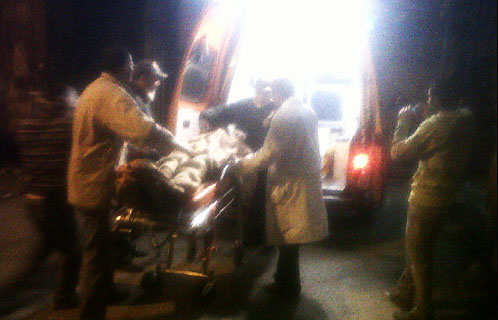 Photos by Mohamed El-Garhey uploaded on his mobile phones

Here are the latest updates in Al Tahrir battle 2 , it is the second battle our protesters are facing against the regime  after last Tuesday January 25.
First of all the death toll officially increased to 4 and the injured now are not less than 1500.
Second of all it seems that Safwat El-Sherif will the scapegoat of the current Tahrir massacre. More and more people are speaking on TV on air blaming Safwat El-Sherif .
Currently our youth have controlled the square but the thugs are still there and according to writer Balal Fadl there is fear that more thugs will come in to the square more and more.
The Al Tahrir square looks like a war zone tonight. The story is always developing , I will not sleep tonight.
Here are early photos showing the field hospital currently at Al Tahrir square.
There is about 10,000 protesters currently in the square.
The morale of the protesters are high despite the injuries , check the photos of Mohamed El-Garhey uploaded by his mobile phones.

More photos from the clashes taken today by our dear Sarah Carr.

1// The army has not blocked or confiscated any medical supplies delivered to the anti Mubarak regime.
2// No doctor has been killed by thugs inside the field hospital , it is rumor