Erdogan to Gaza: The Siege Begins to Lift, Slowly 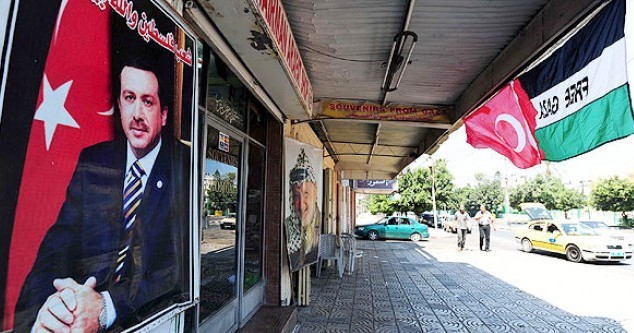 It’s typical of the NY Times in reporting a story that is injurious to Israel’s Occupation policy and strangulation of Gaza, that it would focus largely on the impact it will have internally on Palestinian politics.  Turkey’s prime minister Ergodan announced that he planned to visit Gaza.  This comes on the heels of a visit from the Qatari emir and his announcement that he’d be investing $400-million in rebuilding Gaza, which was decimated by Israel’s indiscriminate attack on the enclave’s civilian infrastructure during Operation Cast Lead.  That should’ve shamed both Israel and the Europeans.  The latter along with the UN had pledged to doing rebuilding of their own, which has largely been stymied by Israel’s continued blockade.

Now that Qatar has taken the lead, a more significant Middle Eastern power like Turkey can step up and do its part to show that Israel’s blockade serves no interest but that of Occupation powers who seek to paralyze the prospect of Palestinian unity.

As for the Times, Jodi Rudoren focused almost entirely on the blow that the upcoming trip would give to the PA and Fatah, which find it convenient to join in Israel’s attempt to ostracize Hamas.  Those who support the PA, including the Times, have a quaint notion that the PA is the sole legitimate representative of the Palestinian people, the address at which the conflict will be solved if it can ever be solved.

News hasn’t yet arrived that the Palestinians have two legitimate forces vying for power and that the attempt to stifle Hamas and isolate Gaza has run counter to the interests of those who really want to resolve the conflict.

All this will contribute to the slow lifting of the western siege against Gaza.  Next up, I expect Egypt’s president Morsi to make his own visit.  At that point, the west and Israel will be arrayed against the forces of the Arab Spring, who will be endorsing rapprochement between Palestinian factions, and the Arab League proposal to solve the conflict.  The rejectionists will be the U.S., Israel and the EU, who will be attempting to maintain their feeble, defanged siege.  It will be something like locking the barn door after the horses have escaped.

Presumably Erdogan will go to Gaza before the upcoming late January Israeli elections.  This will allow the ultra-nationalists, who offer permanent  rejectionism as Israel’s raison d’etre, to portray Turkey as the Muslim bully browbeating Israel into compromising its security needs and relaxing its hold on Gaza.  Turkey and Hamas get to score their points in the Arab world by upholding Muslim self-respect.  It’s a perfect storm of political posturing.

Given Israel’s firm rejectionist stance Erdogan’s visit will further isolate Israel within the Middle East and hopefully make its allies and enablers realize that Israel’s current Occupation policies are a losing horse.