Enough Conflict: Time for Egyptians and Saudis To Talk 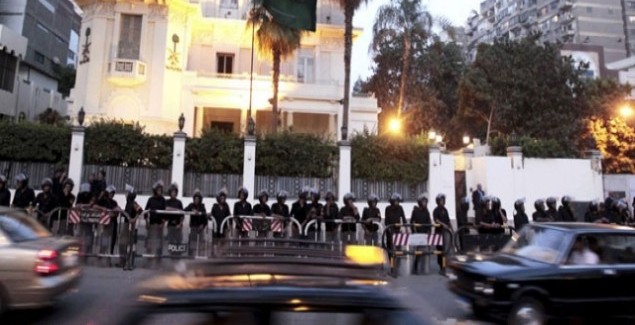 Saudi Arabia has announced it will re-open its embassy in Egypt, after closing it in late April due to massive protests. The conflict began when Ahmed al-Gizawi, an Egyptian human rights lawyer, was arrested in April by Saudi security forces upon arriving in the country to take part in the umrah, an Islamic pilgrimage. He was later accused of smuggling drugs into the country, a claim that Egyptians rejected. His arrest struck a sensitive chord with Egyptians, sparked mass protests that led to the closing of the Saudi embassy and resulted in bitter online arguments between Egyptian and Saudi human rights activists.

What I think that both Egyptian and Saudi activists missed in the ensuing debate, however, is that ultimately we, as activists, are on the same side in trying to foster support for human rights in the Middle East.

Over the course of the online attacks, both sides employed angry, frustrated and emotional language. As an Egyptian, I understood the fury from my fellow citizens. I found myself angered by Saudi activists’ response, as well as al-Gizawi’s claims about mistreatment in custody.

The war of words between the two sides, both online and in print publications, was inflamed by focusing on perceived problems with the other side. Saudi writers criticised the “chaos” and political turmoil in Egypt. Egyptians responded by highlighting human rights violations against Egyptians working in Saudi Arabia, where the Egypt State Information Service estimates there at least 900,000 Egyptian workers.

Despite such bitter disagreements, I believe that we – as human rights activists in both countries – have the potential to change our approach. If we can begin to use respectful language and be tolerant with those who are natural allies, we can do more to fight injustice in both Egypt and Saudi Arabia.

Some activists attempted to calm the situation by posting positive things about the other side, which is a significant step. On Twitter, some Saudis used the hashtag “an Egyptian who influenced me” and mentioned Egyptians who had left a positive mark on a Saudi’s life. Unfortunately, few Egyptians responded with the same warmth.

Those Saudis who began this hashtag campaign should be praised, and supported, by their fellow human rights defenders in Egypt. They can be powerful allies in the struggle for justice.

Ultimately, both countries are in the same boat. Voices opposing the government’s human rights violations are suppressed in Saudi Arabia, just as in Egypt. Even though we Egyptians feel frustrated, we should be mindful of individual efforts to promote tolerance on both sides during the battle of words – such as the brave activists who put forward a hashtag talking about which Egyptians had inspired them. This sort of action can help develop and push dialogue and understanding forward.

The quest for justice is global, yet we – in the Middle East and elsewhere – are often blinded by anger, and have trouble seeing beyond our borders. Human rights defenders in Egypt and Saudi Arabia both face grave dangers, including attacks on personal freedoms and speech, and the possibility of being arrested and charged for what they write on Twitter. Unifying both sides is critical to nurturing a region-wide culture that respects human rights. We should reach out to similar civil society activists and youth movements in Saudi Arabia and ask them to join with us in supporting human rights, instead of making generalisations and alienating them.

On-going dialogue, even when there is no crisis, can help to bring Saudi and Egyptian activists to the table on an on-going basis to understand each side’s struggle and point of view and learn how we might work together. And by choosing tolerant and peaceful language as they relate to each other, both sides can help to foster inclusion rather than embolden the emotional responses that often create a sense of hate.

The human rights communities in both countries need to step up and speak in a unified tone. Al-Gizawi’s case should be an opportunity to reject injustice and a chance for activists on both sides to claim him as their own. Such actions are key to creating a better, more just Middle East and a better world, one based on tolerance, understanding and respect for human rights.

Manar Ammar is a co-founder of Bikyamasr.com.