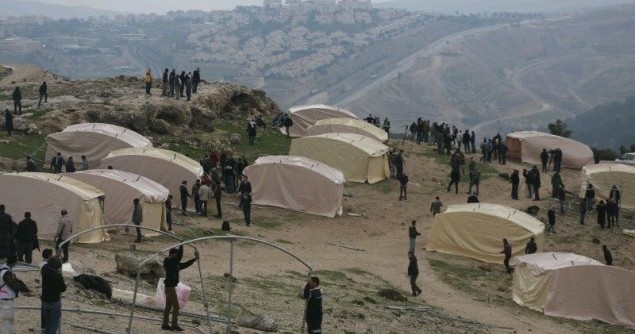 As you’ve probably seen, Palestinians have begun to erect a new village, Bab al-Shams (Gate of the Sun) on land seized by Israel for new settlements. (More in Electronic Intifada, NYTimes.) The village’s name is taken from Elias Khoury’s beautiful, epic novel, Bab Al Shams, or Gate of the Sun (trans. Humphrey Davies).

The proto-village was being evacuated early Sunday morning.

But before that, Khoury sent a letter to the people of Bab al-Shams:

“I won’t say I wish I were with you, I am with you. I see you, and I see how the dream through your hands has turned into reality rooted in the earth. “On this earth is what makes life worth living,” just as Mahmoud Darwish wrote, for when you built your wonderful village you gave back meaning to meaning. You became the sons of this land and its masters.

This is the Palestine that Younis dreamt of in the novel Bab Al Shams / Gate of the Sun. Younis had a dream made of words, and the words became wounds bleeding over the land. You became, people of Bab Al Shams, the words that carry the dream of freedom and return Palestine to Palestine.

I see in your village all the faces of the loved ones who departed on the way to the land of our Palestinian promise. Palestine is the promise of the strangers who were expelled from their land and continue to be expelled every day from their homes.

Strangers and yet you are the sons of the land, its olives and oil!

You are the olives of Palestine that shine under the sun of justice, and as you build your village, the light of freedom flares up with you.

I see in your eyes a nation born from the rubble of the nakba that has gone on for sixty-four years.

I see you and in my heart the words grow. I see the words and you grow in my heart, rise high and burst into the sky.

Finally, I have only the wish that you accept me as a citizen in your village, that I may learn with you the meanings of freedom and justice.”