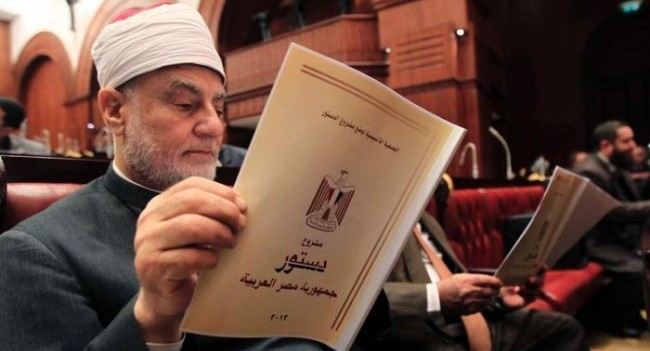 Over half the articles of the proposed constitution for Egypt were approved by the “Committee of 50″ on Saturday. The rest will be taken up on Sunday. The voting was on a majority vote basis, but in any case only rare articles attracted more than one or two “no” votes.

This constitution replaces both the 1971 organic law and the 2012 Muslim Brotherhood constitution that succeeded it. It is in some large part modeled on the constitution of the Fifth Republic in France.

This constitution is significantly more secular than the one of 2012.

It guarantees absolute freedom of faith and belief. It removes a provision that would have allowed the al-Azhar Seminary to pronounce on the parts of Egyptian law directly drawn from the Muslim legal code or shariah. It forbids the formation of political parties based on religion (i.e. it bans the Freedom and Justice Party of the Muslim Brotherhood from contesting elections, since religion is in its platform).

It should be noted that Angela Merkel’s Christian Democratic Union in Germany would be illegal according to this constitution. And, I suspect, many Evangelical politicians in the Republican Party in the US would be expelled from Congress. What I can’t understand is that the Salafi Nour Party says it is all right with this constitution, even though as far as I can tell it might well require the dissolution of that party.

On the other hand, the constitution contains some key contradictions. It forbids insulting prophets (i.e. Moses, Jesus, Muhammad), and it says that Islamic law is the principal source of legislation. (Fundamentalists wanted to remove the qualifier “principal” but failed). It says Coptic Christians and Muslims will each be governed in personal status matters by the laws of their religion (regarding marriage, divorce, inheritance, etc.) It would be better to have a uniform civil code. So it contains some religious principles. In fact, it leaves many issues to be governed by subsequent statute as passed by the parliament (which will be a single chamber— the Committee of 50 is abolishing the largely ceremonial upper house, which had become a tool of rule for the Muslim Brotherhood president, Muhammad Morsi).

The Supreme Council of the Armed Forces, the top 23 officers, is given the right to approve the choice of Minister of Defense for the next two presidential terms, i.e. for 8 years beginning next summer. This step is intended to prevent a repeat of the Morsi period, when the Muslim Brotherhood appointed Gen. Abdel Fattah al-Sisi because they thought he was pious. In the end, whatever his religious beliefs, he overthrew the Brotherhood government that was elected in June, 2012.

forbids torture and makes it a crime with no statute of limitations. If this provision is ever actually implemented, it will be a major gain of the youth activists such as Wael Abbas who campaigned against police torture from the middle of the last decade. The government of Muhammad Morsi was criticized for not having in fact stopped police torture.

The old socialist provision of the 1971 constitution that set aside half of seats in parliament for peasants and workers was abolished. Egyptian socialists were angered and worried that the next parliament would be peopled by millionaires (welcome to our world). But the fact is that many deputies who ran as independents for those worker seats were very well off. In the Mubarak period they usually joined the National Democratic Party as soon as parliament convened, so they were hardly independents in fact. The right to form unions will be regulated by statute, which is not a good sign.

The constitution is a very mixed bag, with some good provisions and some horrible ones. It says people can hold private meetings without seeking permission, which is a major step away from the old Egyptian police state. But that provision seems to contradict the just-passed law forbidding demonstrations unless they are licensed by the police.

It is also good on the treatment of children and forbidding human trafficking. The Muslim Brotherhood government had opposed such a prohibition on the grounds that it might end up being used to forbid early marriage of girls (according to Hiba Morayef of Human Rights Watch via Twitter).

It says that international treaties signed by the Egyptian government become domestic law. It also says that citizens can sue the government and officials if they try to deprive the citizens of their guaranteed rights. Since the Egyptian state has insincerely signed a lot of international treaties and instruments on human rights, the Committee of 50 is setting up Egyptian lawyers to get very busy and very rich.

Mada Misr discusses the vote on many of the controversial articles. Five committee members objected to “Article 53, which equalizes citizens before the law, regardless of their religion, doctrine, gender, race, color, language, handicap, social status, political or geographic affiliation.” But it passed.

Article 64: Freedom of belief is absolute. Thirty-six voted for, three abstained from voting, eight voted against.

Article 65: Freedom of thought and opinion is guaranteed and every human being is entitled to express his/her views verbally or in writing, by photography, or any other form of expression. Forty-three voted for, five voted against.

Article 70: Freedom of journalism, printing and publishing in all forms is guaranteed; every Egyptian has the right to own and issue newspapers and to establish audio and visual media. Newspapers are to be issued after notifying the authorities, in accordance with the law. The law regulates procedures for establishing and owning media entities.

Article 71: Censorship, confiscation, suspension, or closure of Egyptian media is prohibited. During times of war or public mobilisation, exceptional censorship is possible.”

Article 70 sounds good but Hiba Morayef of Human Rights Watch pointed out on Twitter, it retains the 2012 language about newspapers being freely established on notification, but says that television will be regulated by statute.

In the end, this is a constitution crafted by and for the relatively secular-minded Egyptian upper classes. (As if working people can each found a newspaper!) It is not anti-religious but it tries to forbid political Islam or the importing of religion into politics. It has many provisions benefiting the upper classes but does little for the workers or the poor. It is ironic that the provisions banning censorship and establishing freedom of speech were passed on a day when dissident Ahmad Maher was arrested for thought crimes (his criticism of the anti-protest law). Indeed, how contradictory a document it is should be obvious from the ironic title of this posting.

A referendum on the constitution will be held in January.