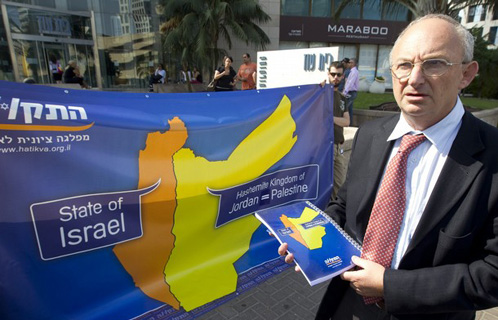 GETTY | Israeli right-wing member of parliament Arieh Eldad stands in front of the Jordanian Embassy in Tel Aviv on May 24, 2011 with a petition he says was signed by more than 6,000 people supporting the ‘Jordan is Palestine’ solution to the Israel-Arab conflict.

I’m glad the Jordanian embassy in Israel refused to let them in but this seems to highlight the fact that there seems to be no purpose for us to have an embassy in that country to begin with, and vice versa. I have never really cared about arguments regarding the existence of either embassy in either country, but had a petition been presented to the Israeli embassy in Amman calling Israel Palestine, would Israel not consider it an act of aggression? Would it not consider it as deligitmizing its existence? Indeed, do these right wing nutters not get that presenting such a ludicrous petition to the Jordanian embassy, in essence, delegitimizes the very existence of the Kingdom?

All that aside, this petition presents a much bigger problem for Jordan. While it is non-representative and in itself does not pose any real danger to the Kingdom, it will likely be used by our country as a pretext for whatever measures it wishes to take in the name of “stability” and “security”. It will be capitalized on like a straw man, and embolden the fears of those believe that there is a vast conspiracy afoot to overthrow the Jordanian state and establish a Palestinian state.

In other words, those who are likely to be hurt the most by such a petition are actually the Jordanian people, and not the state. It is the population that will suffer the backlash. It is the population that will have to endure, even subconsciously, the continued scarring that comes with the national identity question. And it will only serve to pull at the strings of loyalty and mistrust we have of certain demographics within our population.

Whether this petition was an attempt by a group of idiots who truly believe what they believe, or an attempt to push discord amongst Jordanians, is uknown, but worth a moment of consideration.