Drowned in Blood: It’s Time to Lower the Flag 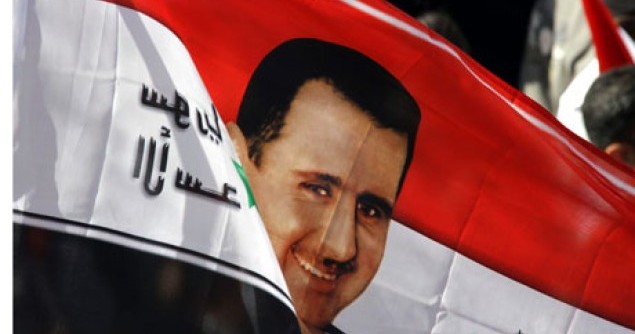 Flags are traditionally held at half-mast during times of mourning. Syria has been in mourning for almost two years. At least 38,000 are feared dead, and 340,000 are refugees. The vast majority are civilians. The vast majority were killed by the foot soldiers of a family that will do anything to stay in power.

Until August 2011, Syrians, revolutionaries and Basharists, would fly the Syrian flag. Then something changed: Tripoli fell. The symbolism of Libya’s change of stripes was powerful.

A regime had been forced from power by a population that had risen up against a tyrant. Statues were pulled down, posters defaced and flags were swapped. It was a literal handover of power, expressed through a new cloth on the mast.

From this point on, Syria’s mandate-era flag (also known as the freedom flag or the revolutionary flag) became more widespread.

It was also a reaction against the way regime supporters had claimed the Syrian flag as a symbol of the tyrant. They printed his face on the flag. It had ceased to become a national flag, and instead turned into the mark of a militia – with the warlord’s face adorning the tricolour.

In May 2011, Amal Hanano returned to her hometown of Aleppo, and wrote a moving piece called This Flag is My Flag.  It was her attempt to reclaim the Syrian national flag from the clutches of Bashar’s ever-dwindling gang of supporters:

“Each group should stick to the symbols they already have to clearly express their position. Dear Loyalists: This flag is our flag, Syria’s flag. If you want to show your love for the regime, please wave a Ba’athist flag. Dear Brave Syrian Opposition: Carry with pride our Syrian flag, the flag of unity.”

Things changed very quickly after that.

Syria is a country at war with itself. It can not agree who should lead it, it can not even agree on its national symbols. These things will be settled after the fall of the regime and the rise of the country’s next rulers.

The abuse of the country’s symbols was inevitable by a regime that has spent a generation abusing the country’s institutions. And it seems likely that the flag will fall with the fall of the regime.

When I last took a photo of the Syrian flag, it was a sunny day in March 2008 in Qaimariyah in the Old City of Damascus. Syria was a different place. I had a naive hope that Bashar would lead the country to regional peace and domestic prosperity. The flag was a symbol of all of Syria. I was wrong and the flag is a symbol of that bygone era. It’s time to lower that flag.