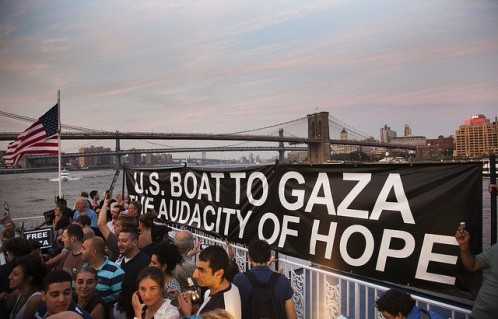 The State Department has issued a new travel advisory for Gaza warning Americans not to go there by sea because Israel might try and kill them. With impunity.

Three dozen Americans are now preparing to travel to Gaza by sea on the flotilla. But the State Department warning says:

The security environment within Gaza, including its border with Egypt and its seacoast, is dangerous and volatile. U.S. citizens are advised against traveling to Gaza by any means, including via sea. Previous attempts to enter Gaza by sea have been stopped by Israeli naval vessels and resulted in the injury, death, arrest, and deportation of U.S. citizens. U.S. citizens participating in any effort to reach Gaza by sea should understand that they may face arrest, prosecution, and deportation by the Government of Israel… On May 31, 2010, nine people were killed, including one U.S. citizen, in such an attempt.

That U.S. citizen was of course Furkan Doğan, a 19 year old permanent resident of Turkey who witnesses said was shot repeatedly as he attempted to photograph the commandos on the Mavi Marmara.

Ali Gharib says, “if you try to travel to Gaza, Israel might kill you.” And:

During his recent visit to Washington, Israeli Prime Minister Benjamin Netanyahu remarked that “America has no better friend than Israel.” As Matthew Yglesias pointed out , the statement is “absurd.” This seems borne out by a travel warning that tells citizens not to try to get to Gaza by sea so that they don’t risk getting shot by their country’s “best friend.”

Oh and here’s Tablet echoing the State Department: “Supporters of the blockade should be untroubled by the prospect of Israel enforcing it with precision and compassion.” Huh?