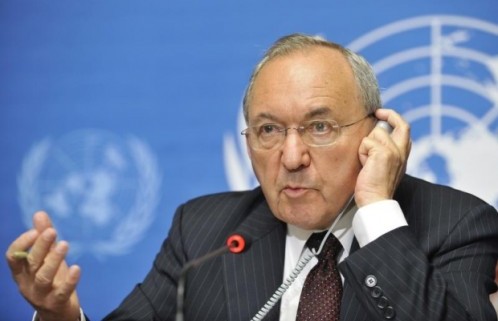 Shocking is not a sufficient term to describe Justice Richard Goldstone’s decision to recant parts of the 2009 report on alleged war crimes in Gaza.

The document, known as the Goldstone Report, was compiled after a thorough investigation led by the South African judge and three other well-regarded investigators. They documented 36 incidents that occurred during the Israeli Operation Cast Lead, an unprecedentedly violent attack against small, impoverished and besieged Gaza. It resulted in the death of over 1,400 Palestinians, and the wounding of over 5,500.

Goldstone is both Jewish and Zionist. His love for Israel has been widely and affectionately conveyed. In this particular case, he seemed completely torn between his ideological and tribal position and his commitment to justice and truth, as enshrined in the mandate of the UN Human Rights Council.

After 18 months of what seemed a wholly personal introspection, accompanied by an endless campaign of pressure and intimidation by Zionist and pro-Israel Jewish groups from all over the world, the man finally surrendered.

“If I had known then what I know now, the Goldstone Report would have been a different document,” he wrote in the Washington Post on April 1. But what did Goldstone learn anew since he issued his 575-page report in September 2009?

The supposed basis of Goldstone’s rethink is a follow-up report issued by a UN committee chaired by retired New York Judge Mary McGowan Davis. Her report was not a reinvestigation of Israel’s —  and Hamas’ — alleged war crimes in Gaza, but a follow up on the Goldstone Commission’s findings, which urged the referral of the matter to the International Criminal Court. McGowan Davis made this distinction clear in a recent interview with the Israeli Jerusalem Post. According to the post, she said, “Our work was completely separate from (Goldstone’s) work.” She further stated, “Our mandate was to take his report as given and start from there.”

So how did a probe that used Goldstone’s findings as a starting point go on to inspire such a major refutation from one of the authors of the original report?

McGowan Davis’ report merely acknowledged that Israel has carried out an investigation into a possible “operational misconduct” in what is largely known outside Israel as the Gaza massacre. The UN follow-up report recognized the alleged 400 investigations, but didn’t bear out their validity. These secret inquiries actually led to little in terms of disciplinary action.

More, the UN team of experts claimed there was “no indication that Israel has opened investigations into the actions of those who designed, planned, ordered and oversaw Operation Cast Lead.”

In fact, Israel is known for investigating itself, and also for almost always finding everyone but its own leadership at fault. Israeli investigations are an obvious mockery of justice. Most of their findings, like those that followed another investigation of the Israeli war on Lebanon in 2006, merely chastised the failure to win the war and to explain Israeli action to the world. They said little about looking into the death and wounding of innocent civilians. Is this what Goldstone meant when he used the words, “if I had known then what I know now”? And could this added knowledge about Israel’s secret —  and largely farcical — investigations be enough to draw such extreme conclusions such as “civilians were not intentionally targeted as a matter of policy”?

This was the thrust of the Israeli argument, which attempted to reduce a persistent policy predicated on collective punishment —  one that used controversial and outright illegal weapons against civilians —  to the injudiciousness of individual soldiers. Goldstone’s calculated retraction is an adoption of “the Israeli position that any misdeeds during the Gaza assault were caused by individual deviants, not by policies or rules of engagement ordered by military leaders,” according to George Bisharat, professor at the Hastings College of the Law (as reported by the San Francisco Chronicle, April 7). Bisharat added, “Yet the original report never accused Israel of widespread deliberate attacks on civilians, and thus Goldstone retracted a claim that had never been made. Most of its essential findings remain unchallenged.”

John Dugard, professor of law at the University of Pretoria and former UN Special Rapporteur on Human Rights in the occupied Palestinian territory agrees. “Richard Goldstone is a former judge and he knows full well that a fact-finding report by four persons, of whom he was only one, like the judgment of a court of law, cannot be changed by the subsequent reflections of a single member of the committee.”

Dugard, well known for his principled stances in the past, is also known for his moral consistency. “It is sad that this champion of accountability and international criminal justice should abandon the cause in such an ill-considered but nevertheless extremely harmful op-ed,” he wrote in the New Statesman on April 6.

Unsurprisingly, Israeli leaders are gloating. “Everything we said was proved true,” declared Prime Minister Benjamin Netanyahu in response to Goldstone’s moral collapse. The New York Times reported on April 5 that Goldstone agreed to visit Israel in July during a telephone call with Israel’s Interior Minister Eli Yishai. “I will be happy to come,” Yishai quoted Goldstone as saying. “I always have love for the State of Israel.”

The fact is, Goldstone’s repudiations of some of his commission’s findings clearly have no legal validity. They are personally, and in fact selfishly motivated, and they prove that political and ideological affiliations are of greater weight for Goldstone than human suffering and international law and justice. There is no doubt, however, that Goldstone’s rethink will represent the backbone of Israel’s rationale in its future attacks on Gaza. Goldstone, once regarded as an “evil, evil man” by prominent Israel apologist in the US, will become the selling point of Israel’s future war crimes.

If the killing of over 1,400 Palestinians is not a “matter of policy”, and Hamas’ killing of four Israelis is “intentional” —  as claimed by Goldstone —  then the sky is the limit for Israel’s war machine.

Indeed, “shocking” is not the right term. “Disgraceful” may be more fitting.