Dig In or Engage: Israel’s Stark Choice on Palestine 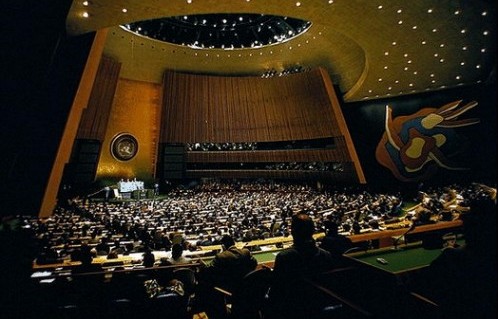 Having despaired of productive negotiations with the Netanyahu government and having lost confidence in the Obama administration, the Palestinians are expected to seek recognition of the State of Palestine from the UN General Assembly (UNGA) in September.

Attaining recognition from the General Assembly will be easy, but once recognition is attained, they face the hard part: getting Israel to end the occupation, share Jerusalem, and make a meaningful accommodation on refugees.

It can be expected that the Palestinians will continue to pursue internationalisation through the UN General Assembly. Their likely next step will be to ask the UN to re-establish the United Nations Special Committee on Palestine (UNSCOP). The committee was originally founded in May of 1947 by the General Assembly in order to formulate a detailed plan for resolving the Palestine question.

In four months’ time, UNSCOP galvanised public attention. It travelled to the Middle East and received testimony from Ben Gurion and Chaim Weizman. It visited the displaced persons camps in Europe. It heard from governments around the world and solicited Palestinian views. Regrettably, the Palestinians boycotted UNSCOP.

UNSCOP unanimously recommended an end to the British Mandate, but was divided on what should come next. The majority report called for two states, one Jewish and one Arab; it detailed the border and spelled out the structure of an international regime for Jerusalem. The minority report called for a federated state. UNSCOP reported back to the General Assembly, and in November 1947, the majority report was enacted as UNGA Resolution 181, the historic Partition Resolution.

If the Palestinians follow this path, within a year there will be a new 181, and the basis for an imposed solution will be laid down. Legalists will remind us that UN General Assembly resolutions are only recommendations, but given the historical role of UNSCOP in the creation of Israel, this legal point will be swept aside. The details of a peace agreement will have been determined, and the world will focus on getting Israel to accept them.

As UNSCOP-2 undertakes its work, the Israeli government will have to decide whether or not to boycott. Like the Palestinians in 1947 it could decide that it is better to boycott than to provide legitimisation.

However, the wisdom of following the Palestinian example is questionable.

What Israeli policy makers should be thinking about is not how to prevent an aggressive Palestinian internationalisation strategy, but rather how to turn this into an opportunity for peace.

Rather than flat opposition to UNSCOP-2, Israel should enlist the United States in an effort to alter the UNSCOP trajectory. Instead of leading to a new 181 and an imposed solution, UNSCOP-2 can become a pathway to a new and more productive form of negotiations.

The United States could tell the Palestinians that it will support UNSCOP-2 as an instrument of the Security Council provided three issues are satisfactorily addressed. First, the terms of reference for UNSCOP-2 must be ones that Israel can live with, such as those provided in the 2002 Roadmap drafted by the Bush administration. Second, UNSCOP-2 must be headed by a fair-minded friend of Israel who is also acceptable to the Palestinians, perhaps someone like Bill Clinton.

Most importantly, UNSCOP-2 should differ from the original UNSCOP once the peace plan is developed. Rather than embedding the plan in a new UN resolution, Israel and the State of Palestine could be asked to negotiate for three months to see if they can agree on any mutually acceptable improvements to the draft treaty.

After three months, the two sides would report back to the UN Security Council to ask for more time, or to announce their failure to reach an agreement or, hopefully, to announce an agreed text. If failure ensues, then the Security Council could ask the United States to resume its central role and offer bridging proposals, or it could call on both states to hold binding referenda on a draft treaty. Or perhaps it would determine that at this point in history an end-of-conflict agreement cannot be reached and that what is needed, either by agreement or by Security Council action, is a determination of the border that will separate the two states.

There is no guarantee that this approach will lead to an enduring peace, but it is hard to see how anything could be worse for Israel than just digging in its heels and allowing events to take their course.

Jerome M. Segal is a philosopher at the University of Maryland and president of The Jewish Peace Lobby.