Denying the “Nakba”: ‘Not An Option, Israel’ 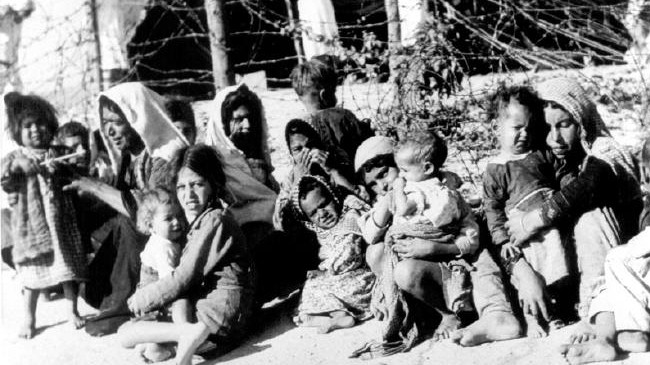 Since 1948, Palestinians and Israelis have shared an event that marks the most significant experience in their histories. For 66 years during the month of May, Palestinians commemorate their “Nakba” or “Catastrophe” that was unleashed on them the day Israel declared its independence, and Israelis celebrate their independence. For seven decades both people have related to the same event that changed their fates- Palestinians recall their forced cruel expulsion from their ancestral lands that their forefathers had tilled and harvested since before the birth of Jesus, and Israelis commemorates the joyous momentous event when Jews gained a country.

While Independence Day generally means that a country or a nation achieves autonomy and power over the territory it owns and operates, it is important to note that within this context Israel’s Independence Day does not fit this widely accepted definition. In 1948, the vast majority of Jews in Palestine were recent European immigrants who escaped the horrors of the German Holocaust and European anti Semitism. In addition, despite the large number of European Jews who immigrated to Palestine during that period, indigenous Palestinian Jews and European immigrant Jews were a minority among the Palestinians who were the majority owners of the land, homes and institutions Israelis acquired. In fact on May 14, 1948, David Ben-Gurion, Israel’s first Prime Minister did not declare the end of the British Mandate of Israel but the end of the “British Mandate of Palestine”. 66 years ago Ben-Gurion personally read and signed Israel’s Declaration of Independence, which fully guaranteed equality and justice for all its inhabitants regardless of their color, religion, race, origin, or creed. He was also Israel’s first minister of defense, and the chief architect of the ethnic cleansing of Palestine.

Palestinians maintain Israel’s independence on May 1948, commenced their “Nakba”, and is the precise date that marks their forced eviction out of their ancestral lands and homes. To date, Palestinians still remember in detail their ruthless expulsion at the hands of Jewish militant Zionists, and they still recall by name the many atrocities that were strategically and meticulously administered on their innocent children, women and elders. Palestinians have never forgotten how Zionist militants intentionally committed, publicized, and circulated Haganah’s massacres and accounts of random rape to force them out of their towns and homes.
Although the Palestinian “Nakba” has been substantiated and carefully documented by several Israeli and Palestinian historians, most Israelis either deny it ever took place, or dismiss and ignore its relevance. Notwithstanding to amend past wrongs, Israel and all those who support it must recognize the immense and continued suffering the “Nakba” has inflicted on millions of Palestinians.

Why should Israelis care to come to terms with the Palestinian “Nakba”? Jews have used every available means and venue to relentlessly press for the right of the Jewish Holocaust victims to be heard and acknowledged, and whose suffering and horrific painful experience remains at the core of the Jewish sense of being. For seven decades Israelis and Jews worldwide have understood the necessity of correcting wrongs of the past whether by individuals, institutions, nations or others who may have committed them. Meanwhile during that same span of time Palestinians continued to suffer a horrendous experience that no people should go through. They were forcefully disconnected from their community and family; and most were forced poor and homeless refugees as a consequence of losing their ancestral homes, land, property, wealth, and status. Although Palestinian financial and material losses are significant, they are immaterial compared to the psychological and emotional trauma inflicted on the “Nakba” survivors; and the Palestinian conscience, and perspective of Zionism and Israel. In summary the Palestinian “Nakba” is the fundamental Palestinian experience that has shaped and defined their national identity, history and understanding of Israel and Zionism.

The Palestinians “Nakba” is “intertwined” and connected to Israel’s history. Since Israel’s inception, generations of Palestinians have remained homeless refugees living in temporary corrugated tin camps across the Middle East. Some Palestinians were also forced out of their homes and villages to nearby towns and camps in the West Bank, East Jerusalem, Gaza, and Israel. Sadly a considerable number of these Palestinian families live in refugee camps and villages stone’s throw away from their ancestral homes and lands that are occupied and relished by Israelis from far away lands. Palestinian “Nakba” survivors were forced homeless to provide a home for Jewish immigrants, and since 1948, they have suffered and ached the loss of family and community. For decades, Palestinians have paid an enormous price for the creation of the Israeli state that was built on their sweat, blood, home, and treasure.

Regardless of Israel’s unique interpretation of its independence, or whether or not Israel’s independence fits the usual pattern of countless nations where people of every color and creed collectively worked together to throw out an oppressive government, it is important to understand the Palestinian perspective. Palestinians view Israel’s Independence Day as a commemoration of the successful outcomes of the joint efforts of European colonial Jewish militant extremists and international Jewish Zionist organizations who planned, funded and unleashed a deliberate campaign of terror on defenseless Palestinians to root them out, disconnect, and displace them from their ancestral homes, properties, businesses, churches, mosques, and institutions.

The Zionists’ aim and strategic objective was to colonize a land not theirs to own. In short, the intent of the Jewish terror campaign was to eject the Palestinian indigenous inhabitants from their ancestral lands and properties to make room for the eventual influx of Jewish immigrants. As a consequence, for seven consecutive decades Palestinian “Nakba” survivors and their descendents have been dispersed in refugee camps, stateless and faceless at the mercy of their host countries, and many still live in crowded refugee camps just few kilometers away from their familial homes and land. Meanwhile Israeli families enjoy the homes Palestinians had built with the sweat of their brow, and indulge and savor the fruit of Palestinian labor, orchards, and trees.

Within the folds of Israel’s Independence Day and the Palestinian “Nakba” lies the crux of the Palestinian- Israeli confounding cruel history that has yet to be resolved. Embracing the Palestinian historical perspective of that fateful day in May 1948, will help Israelis understand how early Zionist-led terror campaigns have affected the perceptions and views of the Palestinian people especially those Palestinians who owned and lived in the homes and lands they enjoy today. In addition, compassionate understanding of the Palestinian “Nakba” will humanize an Israeli society that since its early beginnings has focused on brutal force to maintain domination and control of the Palestinians and their territories. Most importantly an honest acknowledgement of the tragic consequences of Israel’s 1948 actions and policies will go a long way to ease the deep pain of its “Nakba” survivors, and help mitigate the suffering of generations of Palestinians on the hands of the same Israelis who since 1948 have uncompromisingly and rightfully called the world to recognize their painful historical experiences. Otherwise Israel’s continued denial of the “Nakba” and its tragic cost on generations of Palestinians will be viewed and interpreted by people of conscience as a shameful act of contradiction, especially when considering the intense interest and mission of Israelis and Jews worldwide to call attention to their own tragic history of years past.

Palestinians’ straightforward call for Israel and all who support it to step up to the plate and acknowledge their historical tragic and painful “Nakba” experience, and amend Israel’s past wrongs is not unique or novel. There are many examples of many nations who came to terms with their past mistakes by simply recognizing their wrongdoings upon a host of ethnic groups and populations. The Whites of South Africa apologized for instituting South Africa’s 1948 apartheid system of racial separation. In 1988 the US government officially apologized on behalf of the United States for its ill-conceived interment policies of Japanese Americans during WWII, and in 2008 the US acknowledged its discriminatory treatment of the American Native Indians. Australia officially apologized to the Aboriginal people, Turks to the Kurds, and Germany to the Holocaust victims. Their simple act of acknowledgement consoled and comforted the hearts of the abused, touched the conscience of the world, and opened the door for reconciliation.

2 Responses to Denying the “Nakba”: ‘Not An Option, Israel’