‘Democracy Is Doing’: Egyptians ‘Do It’ 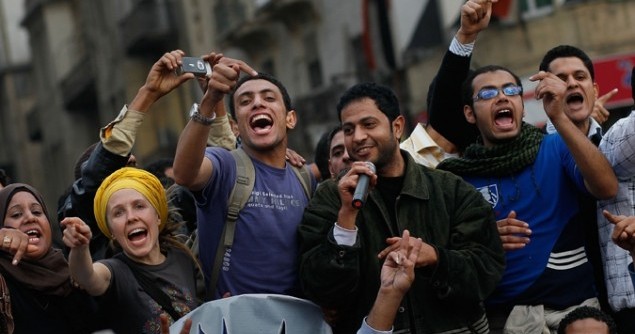 Two years after the Egyptian people took to the streets demanding an end to the dictatorial regime of the former president Hosni Mubarak, Egyptians are now looking at the results they have achieved: the regime has been toppled, a new president has been elected and they have finally been able to express their opinions through popular demonstrations on the one hand, and the ballot box on the other. However, the economic conditions and living standards of many Egyptians have deteriorated. Also, peace and stability have been threatened by an increasing prevalence of violence in the country.

Egyptian youth seem to be most frustrated about the current status quo. But while some are feeling frustration and despair, many others continue to work and overcome political, ideological, and religious differences for the sake of a peaceful and democratic transformation in Egypt.

Mohammad Fathi, a Muslim graphic designer and photographer recalls, “we were happy to be part of the change, and were optimistic for a beautiful future. Consecutive events, however, deeply affected our psyche.” While expressing his disappointment with the current situation in the country, he nevertheless talks about the “beautiful solidarity” that united people during the revolution.

Rommel Barsoum and Bishoi Sadeq, Coptic Christian students studying medicine and pharmaceuticals respectively, support the separation of religion – any religion – from the state. But their opinion does not affect their social relationships. They have friends from various political and religious groups in the country and believe that “respecting differences is basic in avoiding violence in all its forms, particularly in the present sensitive stage.”

The problems from which Egypt suffers require practical solutions and monumental efforts to take the country through the transitional period through which it is passing. And Egyptian youth have not hesitated to do their part on the path of change.

Mai Mustafa, a Muslim activist, for example, tries to promote awareness for people around her by enhancing their communications skills. She admits that: “We suffer from the absence of a culture of dialogue and accepting the other. We are not accustomed to difference in opinion, and we do not know how to utilise it, so every argument ends badly.”

To change this, Mai helps organise role-playing exercises in theatres and cafes to train students in listening and debating skills, with the participation of young people from various religious orientations and political parties. Her efforts are supported by the American University in Cairo and eight other universities in Egypt.

Young people who participate in these events explore each other’s ideas through a theatre genre known as monologue, where they describe something they experienced during the Egyptian Revolution from their personal perspective and give arguments that support social and political change. They further debate their opinions in a respectful manner necessary for fruitful discussions.

Both of these exercises permit young people to express their opinions, discuss them, and listen to others’ opinions in order to understand them.

Mohammad Hilmi, the co-founder of the international peace movement MasterPeace, which has its head office in Cairo, emphasises the need to find common ground among those who support the role of religion in the state and those who want to a separation of the two. To this end, he organised debates among Salafis and secularists in Egypt to exchange opinions and ideas about political concepts and future outlooks. The debates ended positively because participants were prepared to discuss differences and accepted the idea that disagreement is natural.

Mohammad adds, “we can only learn by doing. Democracy is a path which requires awareness, accumulated work, and a ground which permits differences and calls for accepting and respecting diversity.”

Egyptian youth have reached a consensus over the importance of social political dialogue to enhance a culture of non-violence. This paves the way for finding shared interests among conflicting positions which, in turn, can help the country transition to another stage in Egypt’s history which protects the right to be different.

Differences plaguing the country can only be overcome through listening, tolerance, and openness. This is the message of the sons and daughters of the Nile today. It is what will save the Egyptian people from wasting more blood and time in their quest for security, and help them to work towards realizing the demands they put forward in Tahrir Square: freedom, democracy, and social justice.

Vanessa Bassil is a Lebanese freelance journalist and Peace Activist, Founder of Media Association for Peace (MAP) and President of MasterPeace Club of Lebanon.