Days, Weeks or Months But Assad’s Fall is Assured 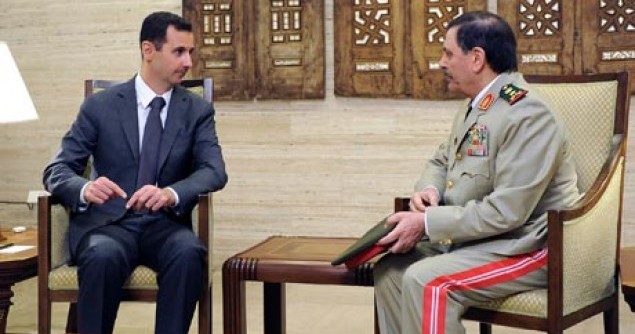 On the afternoon of 18 July a bomb blast in central Damascus striking at the heart of the regime of Bashar al-Assad did more to turn the conflict on its head in a few short seconds than months of fighting between the Syrian Army and the ‘Free Syrian Army’ or deliberations in the Security Council.

News of the attack initially stated that Rajha and Shawkat had been killed. These two men were in the trusted inner circle of President Bashar Assad and their loss represents a profound blow to the regime. Both Shawkat and Rajha held extensive sway over the operations of the armed forces, they knew the urban battlefields well, and were ruthless in exploiting weaknesses among rebel forces. Even though a new Defence Minister – General Fahad Jassim al-Furayj – was soon named, these central figures with decades of contacts and experience are not that easy to replace. But before the regime had time to digest the magnitude of the loss, both Turkomani and al-Shaar also reportedly died of their injuries.

Initially thought to be a suicide attack, it then emerged from various sources claiming it was a remotely detonated device with suggestions that the attack had been planned for up to two months, with explosives being slowly smuggled into the building. On the day itself, apparently during a meeting in Shawkat’s office, the device was triggered killing the four key players.

The attack proved to be a tactical master-stroke. Not only did it shake the regime – perhaps fatally – to its core, but it more than achieved its immediate strategic effect, while filling the ‘Free Syrian Army’ with hope and celebration and rallying support. It also demonstrated a level of tactical cunning that had not been expected from the motley temporary band of confederates that are loosely referred to as the ‘Free Syrian Army’.

That a bomb was both smuggled into and detonated inside one of the most heavily defended buildings in one of the most heavily defended areas of Damascus raises questions as to the loyalty of Assad’s closest circle and those entrusted with their security. While the regime will pretend outwardly that all is well, the remaining key advisors will be nervously looking over their shoulders and keenly searching for signs of treachery around every corner. Cohesiveness among the remaining core of Assad loyalists will surely be tested in the coming days and the prevention of dissent and internecine conflict will be high on the agenda for Syria’s beleaguered President.

Tactical worries for the regime

Aside from tactical questions regarding the effect that this will have on Assad deploying his forces, arguably the more salient issue is the effect that this will have on the level of desertion in the Syrian Armed Forces. Estimates suggest that in addition to the twenty generals that have defected to Turkey they are joined by around one hundred soldiers per week. This rate shot up in the aftermath of this attack. In Idlib unconfirmed reports suggested that two and a half thousand soldiers had crossed the line while other reports suggested that 120 tanks had defected elsewhere, in addition to reports of defections across Syria.

If these reports prove to be correct and this trend continues, it is difficult to see how President Assad could regain momentum with his Armed Forces being riven with fear and the hugely buoyed ‘Free Syrian Army’ having their ranks swelled not only in manpower but potentially with heavier weapons.

This key attack was a part of Operation Damascus Volcano, the bombastically named assault on Damascus launched by the ‘Free Syrian Army’. Aside from a swift upsurge in attacks in the Damascene suburbs the day before, the army barracks overlooking President Assad’s Palace in the hills above Damascus was set ablaze the night before: a visual cue of what was to come.

The initial reaction of the Assad regime appears to have been to give their thug militia, the Shabiha, licence to storm into what are believed to be ‘rebel supporting’ districts of Damascus to exact revenge. Unfortunately, it seems that a stream of horror stories of brutality will be emerging from this specific incident in the days ahead, and cities all around the country will suffer as Assad exacts a brutal and unforgiving revenge.

Indeed, within hours of the explosion regime forces launched aggressive counterattacks in the neighbourhoods of Jaber, Mezzeh, Kafar Soseh, Qaboon, and Al Qadam. The rebels for their part have bedded into the mazy streets of the city but they will need to conserve ammunition, ensure supply lines remain open and well-defended, and maintain morale if their swift advances into the heart of Damascus are not to be tempered by an equally swift retreat.

One must not forget the salutary lesson from Yemen where, even after a near-fatal attack on President Saleh himself – leading to several months recuperation in Saudi Arabia -he was nevertheless still not ousted from power. Nevertheless, it appears that barring a major reversal of fortune, Assad’s downfall is to be measured in days or possibly weeks as opposed to months.

Yet this only enters Syria into the next chapter. One thing that unites all Syria analysts and watchers is a deep fear of a bloodbath of revenge as and when the Assad regime falls. Government attacks and ones that they have sponsored have been deeply brutal and have torn the social fabric of Syria asunder, profoundly polarising communities.

The role of the international community

The international community needs to move swiftly towards a plan that can be implemented to prevent deep purges taking place as and when the Assad regime finally falls. The Security Council whose deliberations were halted following the news of the attack will now sit later in the week to discuss a radically different situation. The Americans will look to seize the initiative and push through a strong resolution empowering the UN monitors to place the final clamps on the regime by bringing it financially to its knees if it engages in further violence against its citizens, which the regime surely must do to survive. These discussions will no doubt sit along with proposing a role for an international peacekeeping force to enter Syria post haste to ensure calm should Assad’s regime suddenly topple.

But for this to happen much will depend on Russia whose government has steadfastly stood by its increasingly beleaguered ally. But the corridors of the Kremlin will be filled with worried brows as a critical blow has been struck that may well signal the beginning of the end for Assad and for Russia’s strategic position in the region. If a diplomatic solution cannot be worked out before the regime fails Russia risks being faced with a hostile Syrian government comprised of opposition groups and those who have long suffered at the hands of Assad and his henchman. Such a result would be catastrophic for Moscow.

It remains to be seen of the Russians can break out of their dogmatic position on Syria and show some flexibility in the coming days, for the risks for the Kremlin in continuing to tow its obstinate path are high. Much will need to be considered as to how best they play out the coming end game, for Assad will now surely fall; the question is not if, but when.