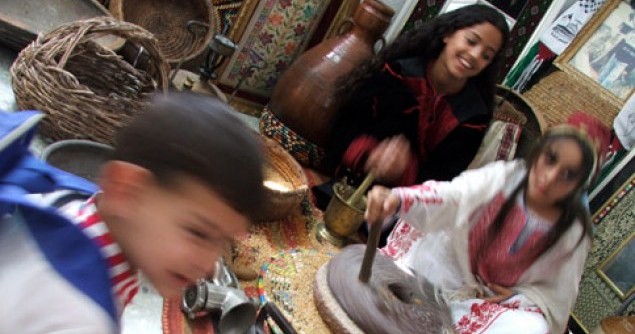 Every week for the past five months, a group of Arab and Jewish women from neighbouring towns near Haifa, Israel have come together to cook. Each week, they meet in a different woman’s home, discovering their commonalities and differences by sharing recipes, culinary traditions and childhood memories.

These weekly meetings take place through an initiative called Cooking for Peace, one of many projects initiated by the Givat Haviva Education Center. Cooking for Peace is part of its new holistic model for peace education called Shared Communities, which was developed in response to profound changes within Jewish and Arab societies in Israel in the past decade and has provided a new way to bridge deep divides.

Since the second intifada began in 2000, Arab Israelis have experienced a rise in national sentiment, motivated by the struggle for statehood by Palestinians in the West Bank and Gaza. Concurrently, a new political and intellectual leadership which advocates a “state for all citizens” in Israel has emerged. Among Jewish Israelis there has also been a sharp rise in nationalist feeling, due in part to the failure of the Oslo peace process.

The rise in nationalism on both sides has made the traditional models for peace education that brought together groups in conflict to discuss their differing historical and political narratives too difficult to implement, and often rendered them ineffective. This reality has forced peace activists to identify a different approach to finding common ground and develop new practices and terminologies.

The new model for peace education shifts the focus from dialogue focusing on narratives to actively discovering common values, daily needs and shared goals. Participants are then encouraged to create cooperative frameworks to be used toward realising these goals.

The Givat Haviva model aims to engage all potential partners in the effort to bridge divides. It builds on the idea that the active involvement of ever-growing social circles contributes to sustainable cooperation between communities. Therefore, the idea of Shared Communities may apply not only to Arab-Jewish relations, but may also address other social schisms between secular and religious Jews, long-time citizens and new immigrants, and rich and poor.

Givat Haviva has become a leading establishment in the field of Jewish-Arab dialogue inside Israel since it founded the Jewish-Arab Center for Peace in 1964. Tens of thousands of participants have taken part in its programmes and encounters. In 2001 Givat Haviva won the UNESCO prize for Peace Education.

Cooking for Peace was part of a major pilot for the Shared Communities initiative. The project brought together participants from the neighbouring towns of Pardes Hanna-Karkur (a Jewish town) and Kfar Kara (an Arab town), both of which are in the Haifa district. The programme was launched in January 2011 with an agreement that pledged inter-communal projects and was signed by the council heads of Pardes Hanna-Karkur and Kfar Kara, who wrote in the agreement: “we are aware that geographical proximity is not sufficient…and what is called for is collaborative work in order to turn geographical proximity into human closeness, trust-building and mutual appreciation.”

Local Stories is another on-going initiative within Shared Communities that has drawn residents of Pardes Hanna-Karkur and Kfar Kara to meet on a regular basis. In this videography course, Jewish and Arab senior citizens meet weekly to learn scriptwriting, editing and how to use a video camera. Participants will collaboratively produce short personal videos illustrating the unique history and character of both communities.

Another programme targets sixth grade children. Together for the Environment has brought together 50 Arab and Jewish children in an innovative learning programme to promote environmental awareness. Children and educators engage in a series of workshops where they work with recyclable materials to create practical and artistic products – while indirectly acquiring a new set of tools for dialogue. United by the shared goal of protecting the environment, the children continually find creative ways to straddle language and cultural barriers.

Other cross-community initiatives include youth theatre, a women’s hiking club, a course in first aide and programmes to empower municipal teams. These multigenerational and cross-cultural initiatives have a holistic, sustainable impact on every aspect of the two communities.

Learning from the Pardes Hanna-Karkur and Kfar Kara pilot, Givat Haviva is now expanding the holistic model for Shared Communities so that it can be used to heal ruptures between many types of divided communities, both in Israel and elsewhere. We hope that the positive impact will bring the needed resources in order to turn the programme into a serious catalyst for change in Israeli society and contribute to the struggle for social justice.

David (Dudu) Amitai is a Spokesperson for Givat Haviva and an alumna of Tel Aviv University and the University of California, Los Angeles.

One Response to ‘Cooking For Peace’: Discovering Shared Values