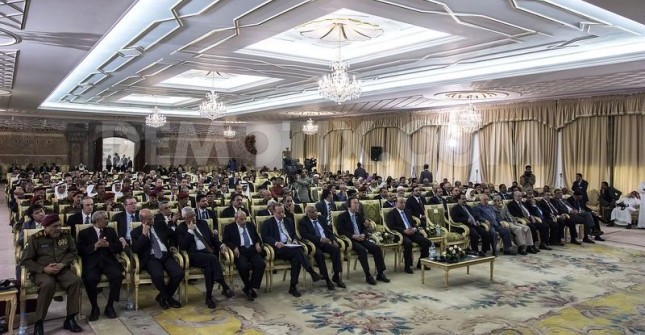 The Yemeni National Dialogue Conference, which started on 18 March, is billed as an opportunity for Yemen to examine and resolve many of its problems as a nation. However, the most important focus of the conference is assuring southerners that their future lies within a unified Yemeni state.

If the Yemeni state wants to preserve unity, it needs to take steps to make southerners feel that they live in a state where they have equal chances and opportunities. Simply put, southerners need to be convinced that they will have a brighter future by remaining part of a united Yemen, rather than seceding.

Unity in Yemen is far from perfect, but an end to it would be disastrous. On the personal level, families would be split and uprooted. The instability created by the division of a sovereign nation state would inevitably create future conflict and hinder Yemen’s development, both in the north and south.

Jamal bin Omar, the UN special envoy to Yemen, has said optimistically that the National Dialogue is “going to be an historic event”. Indeed, the Yemeni government has attempted to make overtures to the southern separatist movement, Herak. Similarly, for the time being, Herak leaders have disavowed violence, saying that they will remain peaceful. President Abd Rabbo Mansour Hadi, himself a southerner, met various Herak representatives in early March in an attempt to get them to take part in the National Dialogue Conference in Dubai. One representative described the meeting as “positive,” and added, “all issues were discussed”.

All of this signals that this is Yemen’s best chance for a negotiated settlement of the issues that threaten to divide the state.

However, a Herak member close to former president of the south, Ali Salem al-Beidh, was quick to play down any hopes of reconciliation, stating, “the dialogue we want is between two sides, north and south, on the basis of separation”.

This resistance to national unity need not derail this opportunity. But to be successful, there needs to be more than just dialogue. Legitimate grievances of the south will need to be fully addressed, and corrected.

The grievances largely stem from the 1994 Civil War and its aftermath. Some northern actors, including many of the elite, took part in wide scale looting and seized land for themselves as the northern army advanced into the south at the end of the war. Many southern civil servants and military men were forced into early retirement and had to make do with paltry pensions, if anything at all. Some of these disenfranchised individuals later founded Herak.

To address these grievances, proper investigations must be undertaken with regards to the land disputes that followed the Civil War. Those who lost their jobs unfairly in the post-war years need to be compensated. Steps have been announced in this regard by the government in the last few months, suggesting that this can be done.

The government needs to move towards the oft-claimed goal of a civil, democratic state so as to convince people that they can have a say in how the country is run, and are not mere observers in the power struggles of the elite.

A federal state – where power is decentralised and people feel enfranchised – is the ideal solution. The government and the organisers of the National Dialogue have said that all options are on the table, and federalism is increasingly being seen in Yemen as a way to give back sovereignty to the country’s various regions.

In late February 2013, 17 Herak activists were killed, leading to increased tension in the south, and even calls for a full scale uprising against rule from Sana’a. Hadi’s conciliatory move to declare those killed martyrs and offer their families compensation should be welcomed by the south. It is a tacit acknowledgment of the right to protest, and that the state was in the wrong. However, unless this is backed up by moves to punish those responsible, Hadi’s actions may be seen merely as empty gestures.

It is important not to view the National Dialogue as the solution to end all of Yemen’s problems. If that happens, then the conference will simply not live up to expectations. What the conference can be, however, is the first step on the road to national unity, setting the country on the path to a brighter future.

Abubakr al-Shamahi is a British-Yemeni freelance journalist and the editor of CommentMidEast.com.