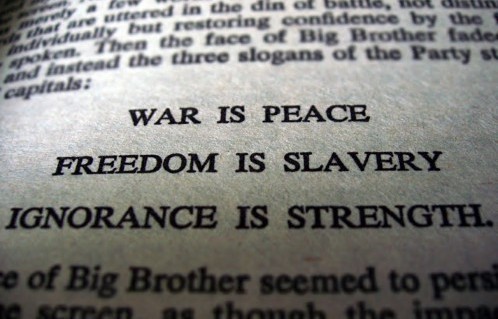 I have a confession. I love the Israeli Ministry of Foreign Affairs website. I can, and often do, read it for hours. It is a treasure trove, home to some of the best propaganda on the planet.

The MFA website is also home to the three sacred words. Words, which when uttered correctly, underpin decades of US-Israeli rejection of a peaceful settlement of the question of Palestine. With reverence and hushed tone, I will now utter them:

The first two are usually used together with the correct qualifiers, and become “Israeli concessions” and “Palestinian intransigence”. This is the discursive framework we use to characterise the history of “negotiations” in the Israel-Palestine conflict. Israel will bend over backwards to try to find a solution but the stubborn Palestinians stick to their guns.

These words are important, as they represent textbook truth inversions; reality turned on its head, or what Orwell would have termed doublespeak.

When asked, Israel’s supporters are hard pressed to name an actual Israeli concession since 1948. I often get two examples thrown at me:

As for “Palestinian intransigence”, this is the term we use when Palestinian negotiators ask for their legal entitlements under international law. Historically, this is a rare event. We’ve seen from the Palestine Papers the extraordinary concessions offered by the Palestinians, concessions, that were flatly rejected by Israel.

The sacred word “precondition” is used in even more impressive ways, and again, the use of the term makes sense only if we use Israel’s territorial ambitions as the reference point. If we use international law as our reference point, it becomes plain that it is Israel demanding the preconditions.

Israel’s extreme preconditions were, until recently:

Preconditions so extreme, that no self respecting negotiator could claim to represent his people’s best interests were he to accept them.

To the enormous credit of Israeli propagandists, and to the enormous shame of the corporate media, Israel has managed to successfully portray their extreme preconditions as being Palestinian preconditions, rather than Israeli.
From the wonderful MFA website, I would like to quote the official Israeli position on preconditions for negotiations:

In Israel’s view, preconditions of this kind are counterproductive to peacemaking…

Peace talks should be used as an opportunity to solve differences, not to create new obstacles. Both the United States and Israel made [it] clear…that Israeli-Palestinian talks would be conducted without preconditions. While it is natural that both parties have complaints about the other’s actions, Israel does not use them as a threat to boycott talks…

Making preconditions is a Palestinian tactic, not used by Israel.

Above, I used the qualifier “until recently” when detailing Israel’s extreme preconditions. While Israel always uses preconditions, it usually maintains the propaganda to keep reality inverted. Following the recent announcement of reconciliation between Hamas and Fateh, and the proposed formation of a unity government, the US-Israel alliance has dropped all pretenses and jumped straight in with a (slightly familiar) set of extra preconditions:

As well as contradicting their own stated policies, Israel’s new preconditions are feebly asymmetric.

There has also been increased reference to Hamas’ notoriously anti-Semitic charter. Conspicuously absent is any reference to Likud’s charter, which commits the party to the destruction of Palestine.

To be fair, the Likud charter has much prettier language, but the intent is clear. It calls for the expansion of settlements in the West Bank of Palestine and flatly rejects the creation of a Palestinian state, at least one West of the River Jordan. In essence, it is the way in which “civilised” states advocate wiping another nation off the map.