‘Come and See A Skeleton’: Response to Issawi’s Invite 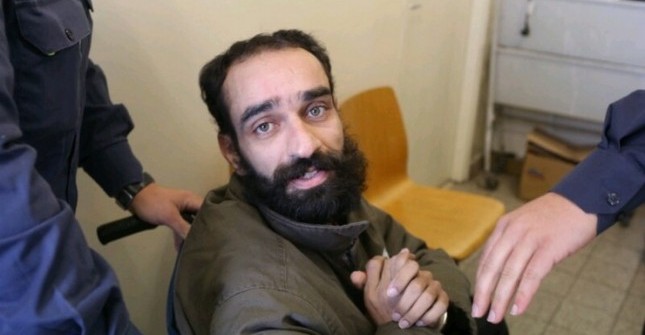 This week in a public letter, Samer Issawi, the Palestinian prisoner who has been on a hunger strike for eight months, challenged Israelis to visit him in the hospital where he is close to death in order to “stare into … [his] …face,” and by doing so confront the horror of his imprisonment.

“I chose to write to you: intellectuals, writers, lawyers and journalists, associations, and civil society activists. I invite you to visit me, to see a skeleton tied to his hospital bed, and around him three exhausted jailers. Sometimes they have their appetizing food and drinks around me.”

A group of twelve activists attempted to visit Issawi at Kaplan Hospital in Rehovot.  Of the group, only two women, the writer Ilana Hammerman and Chava Lerman, succeeded in approaching the prisoner’s room, although they were prohibited from visiting Issawi by hospital guards who used force to deny them entry.  The police were summoned and evicted all 12 activists, briefly detaining Hammerman and Lerman.

After her release, Hammerman issued this statement:

I have decided on a path of civil disobedience. I have been doing it for some time. I think one can’t hold a dying man in prison, that’s illegal. I refuse to obey these laws. I entirely identify with his struggle.

A different type of response to Samer Issawi’s invitation came from a group of Israeli writers who included A. B. Yehoshua and Amos Oz.  Instead of going to the hospital, the writers sent a letter to Issawi via Facebook, suggesting he end his hunger strike.  I was not able to locate the letter on Facebook or anywhere else.  This is how Ha’aretz described parts of the authors’ written statement:

‘Please, Samer Issawi, don’t pile more despair on the despair already in existence. Give yourself hope, thus strengthening the hope within all of us,’ it said.

The authors noted that there are ‘new encouraging signs that the negotiations between the sides will resume,’ adding that these measures may secure Issawi’s release alongside other Palestinians imprisoned in Israel.

‘We urge you to stop your hunger strike and choose life, because we are committed to tirelessly striving toward peace between the two peoples, who will live side by side forever in this country,’ the authors concluded.

Writer Eli Amir, who has signed the letter, told Haaretz the message is not meant to be ‘patronizing.’

‘We have heard rumors recently that the government is proposing to deport him to one of the European states,” he said. ‘[Issawi] has asked why public officials, authors and everyone else is standing by while he is starving and turning into a skeleton. We are trying to help him regardless of what he has done or his opinions.’

Considering the realities of the horrors and illegalities of the decades- long occupation, the capricious arrests of Palestinians, and the ill-treatment Issawi and thousands of others have experienced at the hands of their Israeli jailers, as well as the inflicting of countless other atrocities upon the Palestinians; I find this letter worse than “patronizing.”

If the esteemed writers did not want to accept the invitation to face Issawi eye-to-eye and symbolically confront the horrors of the occupation, they are not helping by writing that “there are signs of hope” and admonishing him to end his fast because they (the Israeli writers) “are committed to tirelessly striving toward peace between the two peoples, who will live side by side forever in this country.”

I, personally, can understand that some people may want to advise Issawi to choose life by ending his fast, but I do not feel that these writers should be making this request.   Asking Issawi to break his fast, while refusing to attempt to visit his hospital room and apparently not directly addressing his suffering or that of the of the Palestinian people is insulting.  Issawi and others are willing to sacrifice their lives, at least partly because they see their situation as hopeless.   For this brave stand they have become heroes and symbols of resistance for most Palestinians.

It is not Israeli writers who should be giving the dying prisoner advice.  He is not asking them for it, only for their understanding, solidarity and support for his release from prison.  If they cannot provide that, they should be silent.

If there is any hope emanating from the Israeli side here, it is not coming from the writers’ letter of unsought advice, but from the words, acts and solidarity of the 12 activists who were barred from visiting Issawi.

Samer Issawi was re-arrested for violating the terms of his prison release by traveling outside Jerusalem.  He had been originally freed from prison in the deal for the Israeli soldier, Gilad Shalit, who was held captive in Gaza.  Issawi now faces the possibility of serving his original 26- year sentence for what Israel claims were attempted murders and belonging to a terrorist group.  Issawi has been receiving infusions of nutrients during his fast which has allowed him to survive, although his present condition is characterized as life-threatening and deteriorating.

It should be noted that even if the charges are true, Issawi is considered a freedom-fighter by the Palestinians.

Samer Issawi has vowed to continue his hunger strike until he is released or dies.