Clinton Tries To Set Up Obama As ‘Patsy to The Hawks’ 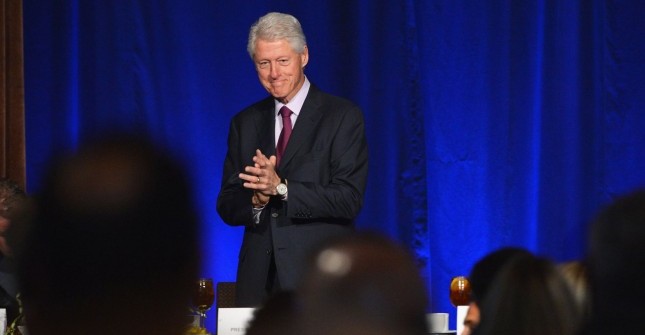 Former president Bill Clinton criticized President Obama on Thursday for his inaction in regard to Syria. This step seems extraordinary and surely has something to do with positioning Hillary Clinton to run as a more hawkish New Democrat against anyone in the Obama circle in 2016.

As Secretary of State, Hillary Clinton appears to have pushed for arming the Syrian rebels, but could not get Obama’s backing for the move. Bill Clinton’s criticism is extremely unfair, since there are many bad situations in the world in which the US cannot fruitfully intervene, and Clinton knows this sad truth all too well.

In 1992-2002 Algeria’s secular generals, tied to France and fueled by petroleum, fought a bloody dirty war against the Islamic Salvation Front and other devotees of political Islam. The world watched in horror as an estimated 150,000 people died. And yet, Clinton never directly intervened. Behind the scenes France backed the generals, and the latter won.

The terrorism produced by the bloody repression in Algeria spilled over onto France and even targeted the United States, when a member of the Algerian Armed Islamic Group attempted in 2000 to drive a car bomb from Canada to LAX (he was stopped at the border and arrested). Nobody remembers Clinton’s paralysis in Algeria, contrary to what he is now predicting about Obama and Syria. This is because if you avoid a quagmire as president, no one holds that against you.

Obama has also been getting substantial pressure from the French and British to do something, and French intelligence has been the most vigorous in pressing the case that the Baath regime in Syria crossed the red line of chemical weapons use. France and Britain have longstanding imperial interests in the Levant, and both fear that the Syrian civil war could produce terrorism that spills over onto Western Europe. Unstated is that it may also produce a refugee crisis in which tens or hundreds of thousands of new immigrants wash up on European soil. Immigrants and terrorism are two key issues in French and British politics, and may be spurring them to action.

Likewise, the Baath and Hizbullah counter-attacks against the opposition in the past two months have yielded battlefield victories and the reassertion of Damascus over parts of the country that had been lost. Russian support appears to have increased in kind and quality, and Iran is playing the Shiite card. If someone doesn’t intervene soon on the rebel side, Washington hawks realize, the war might soon be over and the pro-Iranian regime will survive (just as Algeria’s did).

Obama seems to be attempting to find a face-saving way of getting a little involved but not too much, by sending light weaponry (which of course is not what the rebels need).

Clinton compared what the US could do in Syria to Ronald Reagan’s effort against the Soviets in Afghanistan in the 1980s. But that covert operation of giving billions of dollars and high-tech weaponry to Afghan jihadis was a huge catastrophe, contributing to the creation and rise of al-Qaeda and setting the background for the emergence of the Taliban.

It surely would have been far preferable to let the Soviets try to build a socialist state in Afghanistan, as they tried in Uzbekistan. The whole thing would have fallen apart in 1991 anyway. (There is no truth to the notion that the Afghanistan war bled the Soviet Union or contributed to its collapse. Soviet military spending was flat in the 1980s). The Reagan jihad destabilized both Afghanistan and Pakistan and left us with a long term terrorism problem. We let the Soviets alone in Kazakhstan, and we never worry about today’s Kazakhstan.

You never, ever want to encourage the rise of private militias and flood a country with high- powered weaponry.

Clinton also has in mind his bombing of Serbian forces in the Balkans to protect the Bosnians. But the situation in Syria is not like that in the Balkans, in these ways:

– Syria has stockpiles of chemical weapons, the exact position of which is unknown; indiscriminate bombing raids on Syrian military facilities could release those chemicals on civilian populations

– Unlike in Bosnia, this is not a war by an outside force like the Serbs of ethnic cleansing against a neighbor, but rather it is a civil war. The Alawis, Christians and secular-minded Sunnis in Syria are afraid of the rebel forces and either support or are neutral toward the Syrian government; together they may well come to half the country. That isn’t exactly a mandate for outside intervention.

– Syria’s tanks and artillery are inside cities such as Homs and Damascus, and couldn’t be destroyed from the air without risking hitting civilian apartment buildings. If you want to see a war go bad real quickly, just kill dozens of innocent civilians in their own home from the air.

– The backing for the regime of Russia and Iran makes this more like Vietnam, where the Russians and Chinese supported the Viet Cong, than like the Balkans in the early 1990s when the Russians were weak and supine.

– Flooding Syria with medium or heavy weaponry could destabilize it and its neighbors, including Israel & Palestine, for decades, as the CIA did to Afghanistan and Pakistan. Often in the past, US intelligence actually urged locals involved in covert wars to grow and peddle drugs to get money for weapons, creating long-term problems of narco-terrorism, which still plague Afghanistan and Pakistan.

– The prominence of the Nusra Front and other hard liners affiliated to al-Qaeda in the opposition ranks means the US could end up arming terrorists and helping them take over a whole country.

Given the logistical and tactical difficulties of intervening from the air, and given the lack of a UNSC resolution authorizing the use of force, Obama should be training Syrian oppositionists in Gandhian tactics and encouraging them to create a long-term civil resistance instead of going the militarization route. Some struggles have to be fought over a couple of decades, and those typically only succeed if non-violent.

In general Bill Clinton had few foreign policy successes. He had many more victories on the domestic front, fixing budget woes, getting more justice for workers, and fostering heightened productivity. One of his great failures was yielding to the pressure of the hawks around the Project for a New American Century and bombing Iraq in 1998, in preparation for which he forced the UN weapons inspectors to withdraw. Had they remained on the ground, they could have continued to certify that Iraq had destroyed its weapons of mass destruction. It was later falsely alleged ad infinitum by Bush and his stenographer press corps that Saddam Hussein kicked out the inspectors.

The PNAC warmongers maneuvered Clinton into helping them blind US and world intelligence with regard to Iraq, thus allowing them to make the most outlandish and mendacious allegations without fear of contradiction, and to drag us into a quagmire. Bill Clinton was a patsy for the hawks, and now he is setting up Obama to be another one.