Class Issues ‘At The Heart’ of Tunisian Conflict 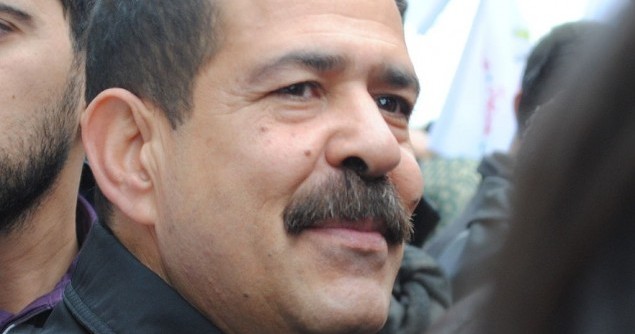 On Friday, tens of thousands of Tunisians took to the streets to protest the shocking assassination of leftist, secular politician Chokri Belaid earlier this week. He had been the leader of a small opposition party and had been an outspoken critic both of the ruling al-Nahda Party and of the neighborhood militias that sprung up during the revolution of 2011 and many of which have never been demobilized.

Friday was marked by a general strike called for by the powerful General Union of Tunisian Workers (French acronym UGTT), the first in 35 years. (During the January, 2011, revolution, the UGTT was relatively timid and only called for a 2-hour work stoppage at one point).

One reason the UGTT called the general strike is that the religious right ruling party, al-Nahda, has since the revolution made a strong partnership with the private Tunisian business sector, and has been unsympathetic toward, and sometimes has repressed, workers’ strikes and movements.

In response to this week’s crisis, al-Nahda Prime Minister Hamadi Jebali proposed the formation of a government of national unity, in which he would appoint apolitical technocrats to major cabinet posts instead of prominent fundamentalist al-Nahda politicians. But the next day, his party’s central committee objected to this plan.

Belaid’s assassination was the most visible and prominent evidence of Tunisia’s class polarization. It is three-way, with workers and intellectuals of the left opposing the new government’s Neoliberal tendencies; with middle and upper classes tied to the old secular state and its institutions afraid of fundamentalism and privatization; and with the fundamentalists promoting private businessmen.

But the murder of Belaid also points to widespread security problems in the wake of the fall of the dictatorial regime of Zine el Abidine Ben Ali two years ago. The security problems derive from three quarters: simple criminal gangs, unruly neighborhood militias, and militant Salafi fundamentalists who act as Ku Klux Klan-style vigilantes against secularists. All three problems derive from the inability of the current government to reconstitute the security forces after the revolution. Tunisia’s some 80,000 secret police were largely disbanded, and the ordinary police are poorly paid and lacking in morale, feeling that people unfairly blame them for policing during the dictatorship. The military is small (35,000 men in a country of 10.5 million) and apolitical and has not played a significant role in civil security issues.

In turn, the incompetence of the ruling al-Nahda government in restoring security is in part structural. The government is full of people who were harassed by the police and unjustly jailed during the old regime, and restoring power to the police is probably not high on their agenda.

The other problem is the way the outcome of the October 23, 2011 parliamentary elections was handled. The Muslim, religious al-Nahda party only got about 37% of the seats. Secular, leftist and center-left parties made up the rest. Moncef Marzouki, leader of the Congress for the Republic party (center-left), went into coalition with al-Nahda and with the small Democratic Forum for Labor and Liberties of Mustapha Ben Jaafar. Marzouki became president and Ben Jaafar became Speaker of the parliament. But the prime ministership went to Hamadi Jebali, an old-time fundamentalist, who formed a cabinet that largely was drawn from al-Nahda, the religious right. The three of them are called the ‘troika’ in Tunisia.

Marzouki is erratic, quirky and ineffectual. Parliament doesn’t function all that well, and Ben Jaafar’s party only got 20 seats, so he isn’t powerful. Jebali and his fundamentalist cabinet have thrown their weight around even though they essentially head a minority government. Tunisian middle classes are often not just secular but militantly Voltaire-like, and they hate al-Nahda and its government.

The security problem posed by the hard line fundamentalist Salafis, who go around physically assaulting people and disrupting cultural events they don’t approve of, has generally been soft-pedaled by al-Nahda. Its leaders typically won’t condemn them outright, and talk about secular ‘provocations’ to the violence, thus blaming the victim.

The secularists go further. When I was in Tunisia last May, secularists repeatedly alleged to me that al-Nahda secretly runs the Salafis as enforcers for their own party, putting them up to their extreme actions. (In September, Salafis were bused by someone to an outer suburb of Tunis where the US embassy is located, and they attacked it).

In some ways, al-Nahda has itself to blame for the polarization and suspicion. It should have put more leftists in the cabinet (reflecting their weight in parliament), and it should have dealt more firmly with the Salafis and neighborhood militias.

Belaid was a critic of the neighborhood militias, of the Salafis and of al-Nahda. But his widow fingered al-Nahda as behind his murder, and this charge is widely believed in the neighborhoods of LaMarsa and other nothern suburbs.

If you really did believe that al-Nahda has dictatorial tendencies and has secret assassination cells, it would be alarming to have as your government, hence the big demonstrations on Friday. But that conspiracy theory is only the expression of bigger class conflicts and anxieties. Tunisia is roiled not just by a religion/secular divide but by a Religious Right vs. Workers and peasants divide, with many middle class intellectuals siding with the latter. That is why the protests took place in hardscrabble rural towns as well as in downtown Tunis. Rural Tunisia is relatively religious, but it is also disproportionately unemployed, and al-Nahda has yet to do much for them. Indeed, where they have tried to strike and protest on labor issues, it has put them down (in a way it seems uninterested in putting down violent Salafis).

As usual, a lot of pundits are looking to use the instability in Tunisia to indict the Arab Spring. But the divisions and the structural problems in the country were largely produced by the old dictatorship, which could no longer deal with them by state coercion. Tunisia is wracked by that new phenomenon, of open political struggle. The country needs to rework it into peaceful civil politics if it is to go ahead, but the struggle itself is salutary. The old Tunisia of 80,000 secret police spying on citizens’ every word and the criminalization of political speech is gone, and good riddance. People who want that back for the sake of ‘stability’ are being unrealistic; it is what produced the instability, because it was untenable in the long run.