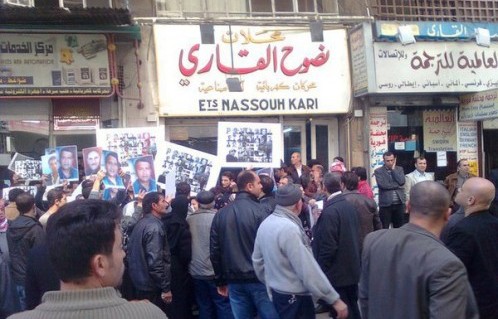 As the protests spread from Daraa, in the south, to Lattakia, in the north, here is what’s been happening.

Farouq Al-Sharaa, himself from Daraa, has gone on TV to say that President Bashar Al-Assad will soon make an announcement that will please the Syrian people. Separately, a government spokesperson has revealed that the hated emergency law will be lifted. It is understood that Bashar will appear on TV on Tuesday to announce the end of the emergency law with immediate effect.

The demonstrations are still only occurring in consistently large numbers in Daraa and Lattakia. In Daraa, activists claim Hizbollah and Iranian fighters are acting as snipers, a claim that has been roundly decried as sectarian talk. In Lattakia, residents report Palestinian gunmen firing indiscriminately, and battling with the army. There are also claims of Jordanian cars in the city. An Associated Press photographer says protestors have smashed two police cars and windows on a number of buildings.

It’s not clear whether any of this is true. In the absence of foreign reporters, rumours will continue to spread like wildfire.

And the Syrian authorities are doing all they can to make sure reporters can not do their job. Khaled Yacoub Oweis, a Reuters correspondent in Syria, who has done a fine job for many years, has been expelled. Oweis is now reporting on Syria from…Amman. Meanwhile, two Reuters journalists were detained for a short time.

As journalists find it harder to work in the country, the YouTube brigades will rule supreme, and anyone with access to a telephone will be able to add their commentary on international news channels.

Politically, Hilary Clinton, in an apparent bid to strengthen Syria’s doves in their battle with the militarists, has said that both Democrats and Republicans believe President Bashar Al-Assad is a reformer. (Shame they couldn’t have shown that earlier.)