Child Labour: It’s a Human Blight That Shames All of Us 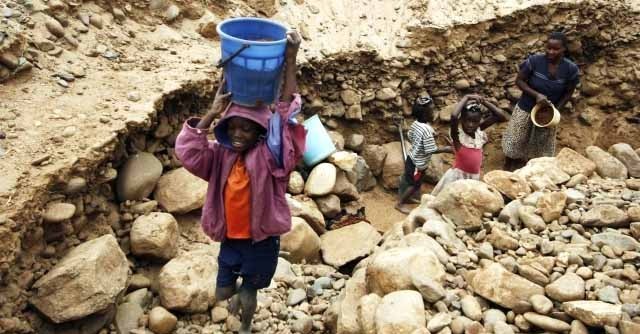 Last night at the hotel lobby of an Arab Gulf country, a family walked in aiming for the westernized café that sells everything but Arabic coffee. The mother seemed distant as she pressed buttons on her smart phone. The father looked tired as he buffed away on his cigarette, and a whole band of children ran around in refreshing chaos that broke the monotony of the fancy but impersonal hotel setting.

Chasing behind the children for no other reason but to be constantly vigilant to any unexpected harm was a very skinny Indonesian teenager wearing a tightly wrapped headscarf, worn out blue jeans and a long shirt. She was the maid, or khadama as maids are called here, meaning a servant.

The girl was but a child, of the same build and overall demeanor of my 14-year-old daughter who is busy with her studies anticipating a very exciting summer ahead. If she is lucky, the Indonesian ‘khadama’ can only expect one day off per two weeks, as she spends all of her time toiling for numerous hours, has no rights, with little or no pay and cannot escape. In most Gulf countries, cheap foreign laborers are asked to hand over their passports in a scheme involving authorities, employment agencies and employers. This is done to ensure compliance and obedience of young men and women that are mostly from southeast Asian countries.

Some Arab countries have become a breeding ground for a form of modern slavery that capitalizes on existing miseries found elsewhere in order to feed the insatiable consumerism that permeates most societies. It is particularly disheartening considering that Islamic doctrines emphasized labor rights many centuries ago, leaving no room whatsoever for alternative interpretations to religious texts that people are created equal, deserving of respect, freedom and dignity.

The injustice doesn’t start and end there. Rich Arab countries are but a mere manifestation of a relentless global phenomenon that requires more than unbinding international conventions but a major shift in cultural attitude.

June 12 was World Day Against Child Labor, an occasion that barely warranted some habitual mentioning by some news media, but certainly not enough to compete with headlines pertaining to the latest gadgets and yet more revealing photos of one Kardashian woman or another. I wonder if we tend to avoid such topics because once they are truly discussed, to varied degrees, we all become culpable? From the brand name clothes we wear, the fancy gadgets we haul around to pretty much everything else we consume, there is surely to be found traces of the sweat and tears of some oppressed laborer or a child with much potential but little hope.

The International Labor Organization (ILO) has done much to delineate the problem and tried to engage various governments around the world to alleviate the suffering of laborers, especially the children amongst them. Most countries around the world ratified ILO Conventions into law, but most are yet to challenge the rooted exploitation in their own societies.

Browsing through the text of ILO’s fundamental child labor Conventions (namely No. 138. No. 182 and the more recently No. 189, adopted at the International Labor Conference of 2011), there is enough clarity regarding the minimum age of admission to employment, the ‘worst forms of child labor’ in domestic work and many other related issues. Yet while governments are giddily signing such Conventions – knowing that accountability is almost nonexistent – often time little changes on the ground.

In Burma, an activist, Hsu Hnget told Irrawaddy news, that child labor is “so deeply rooted in society that it had become a ‘tradition.’”

According to a survey conducted by Child Rights and You, and cited in the Huffington Post, “19 percent of people in South Delhi believe that an individual is a child if he or she is below the age of 10 and most did not know about the laws that prohibit child labor.”

In Indonesia, ILO estimates that almost 2.5 million children are toiling at work, while they should not be working in the first place. The Jakarta Post reported that 21 percent of them are domestic workers and 60 percent work in the tobacco industry. According to the ILO and other organizations, many of them work for no pay.

Bangladesh is particularly rife with such exploitation, the type that also involves many western companies seeking cheap labor and large profit margins. Many of those who perished under the rubble of the Rana Plaza building in Dhaka on April 24 were children, and of course, exploited adults. Since then two relevant anniversaries came and went with little change in work conditions: Labor Day events on May 1 and World Day Against Child Labor on June 12.

There are an estimated 215 million children classified as child labors. Amongst them, according to the International Labor Organization, “10.5 million kids are employed to cook and clean homes, where they’re often subjected to hazardous conditions and sexual abuse.”

In the Middle East, exploiting laborers is also a ‘tradition’, where there is no uproar, or even a slightly serious protest at the dismal work conditions, especially those involving children. This is not limited to foreign workers, but nationals as well. According to a global interactive map on ILO website, “an estimated 13.4 million, or about 15 percent of all children in the (Arab) region are child laborers.”

In a separate study, the ILO explains the types of exploitation in Arab countries. “Working children in this region are vulnerable to participation in illicit activities such as drug trafficking and the commercial sex industry, recruitment by religious extremists, poor health, exposure to unsafe working environments, and lack of access to skills training.”

Of course, the Syrian civil war is expectedly important to any discussion related to exploitation as its horrible consequences are now extending all over the region. Many Syrian children are being exploited in Lebanon and elsewhere as laborers and prostitutes, reported Al Akhbar on June 11. Similar reports are resurfacing elsewhere, throughout Arab countries, Turkey and Europe. “Not far from the Lebanese hot zones, media strategy expert Issam Azouri describes the situation of a child receiving $20 a day to throw a hand grenade or burn a tire,” according to Al Akhbar, which also reported on a 4-year-old boy that begs to survive.

In some tragic way, the Indonesian teenage ‘servant’ from the hotel lobby last night might not even qualify to be included under ‘worst forms of labors’ per ILO Convention No. 182 which defines the type of labor that is similar to slavery.

Regardless, we must not wait yet another year to make a passing mention of the tens of millions of exploited children, nod our heads in predictable tandem about how unfair the world is, and how lucky we are to be spared such injustice. Child laborers would not exist if it were not for the many more millions of willing exploiters, seeking khadamas, fine cigars and brand name garments. The world, after all, is made up by us, so we’d better take responsibility for it and its exploited children.